"Sometimes Layle wondered why, in the names of all the minor deities, he had chosen a love-mate who kept him continually off-balance, rather than the helpless, compliant victim he had so often dreamed about."

Death lurks everywhere in the Eternal Dungeon . . . even in a torturer's bedroom.

Trained as a young man to execute prisoners by entering their bodies, Layle Smith remains a danger to others, even after he moves to a more civilized dungeon, with strict rules on the treatment of prisoners.

Unfortunately, he's unable to convince a former prisoner of that fact. Faced with an adoring, oblivious love-mate, Layle Smith must decide whether he can hold back his dark desire, or whether he should give in to that desire . . . for his love-mate's sake.

Boilerplate warning for all my stories + my rating system.

Author's note: This is the fourth story in The Balance, the third volume in the Eternal Dungeon series. You don't need to read the other stories in the series to understand this one. 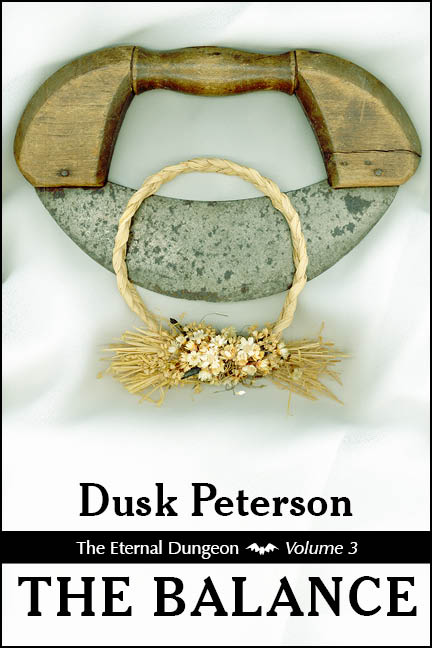 One of the most common errors made by historians writing about the Eternal Dungeon is to assume that the dungeon's first High Seeker, Layle Smith, was alone among the Seekers in his penchant for violence.

Dungeons of torture attract brutal men – that can be treated as a given. Indeed, the Eternal Dungeon was unusual precisely because it attracted a high proportion of workers who had no inherent gift for brutality but were drawn to the place by the high ideals expressed in its Code of Seeking – ideals that, in theory anyway, placed the welfare of the prisoners before all other considerations. Such contemporaries of Layle Smith as Weldon Chapman and Seward Sobel must have seemed striking in their time, not for the brutal acts that they were required to commit, but for their lack of desire to commit such acts.

All nations go through the same four stages in their attitude toward torture. In the beginning, torture is not questioned, either as a means or as an end in itself. It is simply practiced. At a later stage, humans develop the need to justify their cruel treatment of prisoners, and so they evolve the theory that harsh punishments and ordeals are necessary in order to maintain social order. In the past, this justification was most commonly associated with the notorious Hidden Dungeon in the Kingdom of Vovim, where it was believed that, without the practice of torture, the King's peace would be destroyed.

At a yet later stage, nations come to realize that social order alone cannot justify the wrenching of limbs or the scarring of bodies. At this point, a deeper thinking takes place, and the men and women who practice torture satisfy their consciences by arguing that torture is necessary in order to reform criminals and to allow them the opportunity to confess their crimes.

This ideal was initially developed by the Eternal Dungeon in the Queendom of Yclau, from which it spread to many nations. The ideal flourished for the first century and a half of the dungeon's history. Though we have now moved beyond that ideal to a yet higher one – a realization that nothing at all can justify the evils brought about by the mutilation of bodies – it would be a mistake for us to think that we have moved beyond the Eternal Dungeon's early years in all respects. Heated debates in our present-day society over methods of criminal "reform" such as forced therapy in prisons show that this ideal has not disappeared from our society, but merely mutated into a more insidious form.

That there was a grain of truth to this ideal is clear from the documents found within the Eternal Dungeon. Some prisoners did indeed undergo a marvellous transformation of heart as a result of the torture they endured. But as many commentators have noted, idealization of torture brings certain dangers not present in older beliefs about torture. Cruelty may be sated and a desire for punishment satisfied, but a determination to transform a prisoner's mind will not rest content with anything less than a complete breaking of heart and soul. In that respect, Layle Smith was far more dangerous than his counterpart in the Hidden Dungeon.

Yet Layle Smith was not alone in either his longing to hurt prisoners or his idealization of torture that provided him with justification for what he did. Many torturers in his time struggled with similar problems . . .

—Psychologists with Whips: A History of the Eternal Dungeon.

Layle Smith caught his breath. He always caught his breath when Elsdon Taylor knelt in front of him, as the young man was wont to do at the most unexpected moments, probably because he enjoyed seeing Layle caught off-guard. Sometimes Layle wondered why, in the names of all the minor deities, he had chosen a love-mate who kept him continually off-balance, rather than the helpless, compliant victim he had so often dreamed about.

Then Elsdon would smile up at him, his eyes simultaneously filled with gentleness and wisdom, and Layle would remember.

"What is this?" Layle asked, trying to sound as commanding as a man who held the title of High Seeker ought to sound, though he very much doubted that his love-mate was fooled. Elsdon was a Seeker as well.

"My present," said Elsdon. "Did you think I'd forgotten?"

Layle, sitting in his usual armchair as he tried to finish reading a tall stack of guards' reports on the table beside him, looked down at where Elsdon knelt at his feet. Between his legs, in actual fact, a space which by all rights Elsdon should not have been able to reach without Layle noticing. Layle would have been long dead if he had been that careless with a prisoner. "Never forget that most of the prisoners in this dungeon believe that their only road to escape lies in killing you." He had told that to dozens of Seekers-in-Training over the years, including the young man kneeling before him.

When had he become so complacent to Elsdon's presence that his love-mate could take him unawares like this?

He cleared his throat. "I don't see any gift."

A dimple appeared in Elsdon's cheek. "Yes, you do."

Layle reflected to himself that Elsdon was showing unusual mercy by remaining clothed during this speech. Of course, that could be because he knew how much the High Seeker enjoyed ordering him to strip. Layle sighed and rubbed his eyes. He had not only become complacent; the pattern between him and Elsdon had become so predictable that his love-mate could plan the next move without awaiting Layle's word.

And that, he feared, was precisely what Elsdon was trying to point out to him.

He tried to stall. "Our fifth anniversary was three months ago."

"The fourth month of 355 is when we met. The seventh month is when we became love-mates."

He made a quick calculation in his head – a very quick calculation, for those early days were imprinted in his mind like gold upon scrollwork. "Then our anniversary was three days ago. That's when we first kissed."

"That was before I discovered what sort of dreamings you had about me. And when I did—"

"You quite sensibly broke matters off between us rather than risk being bedded by a sadist." He heard the harshness in his voice. After all this time, he still could not believe that Elsdon had made a wise choice in selecting him as a love-mate.

"And even more sensibly mended matters with you the next day." Elsdon sounded as blithe as he always did when discussing that decision.

"Which means yesterday was our anniversary." He strove to keep control of the conversation. The gods alone knew why; he had never won any battle that Elsdon set out to win.

He looked round the small Seekers' cell that he and Elsdon shared. All about him, he noticed for the first time in many months, were signs that he did not live alone. On a nearby table lay a technical manual on the workings of steam engines, the sort of information which made Layle's mind spin but which Elsdon happily gobbled up in his few spare moments. Nearby was a report by Elsdon about his latest prisoner, carefully composed in his school-neat handwriting. And over the bed-rail in the adjoining room lay Elsdon's hood.

And yet Elsdon had removed his hood without Layle even noticing it. And Elsdon could not have failed to miss the fact that Layle had not noticed it.

Layle rubbed his eyes again. This was beginning to look very bad.

"Today," insisted Elsdon. "Yesterday was the anniversary of when I agreed to stay with you forever. Today is the day when I managed to convince you that I was telling the truth."

He surrendered then. It was always easier to surrender; whatever Elsdon was planning would be less painful that way, as many of the junior Seeker's prisoners had discovered.

Laying aside his writing board, Layle said, "I haven't forgotten that day."

Elsdon smiled again, the smile of a Seeker who senses the approach of a breaking. "I should hope not," he said. "The day ended much better than it began."

"It could not possibly have ended worse than it began," Layle replied dryly.

6 guests left kudos on this work!