Yami reflects on Tupac Shakur, the Notorious B.I.G. and what happened to them.

Hey there, my fellow writers and readers.. :) I hope you’re doing well with your stories, of course. Well, here’s a new Yu-Gi-Oh oneshot I cooked up one day. This time, I dedicate it to all the fans of Yu-Gi-Oh, as well as the memory of Biggie Smalls (aka Notorious BIG) and Tupac Shakur. It’s in Yami’s point of view. Plus, I put in a few news articles from the Internet.

Disclaimer: Genius Kazuki Takahashi owns Yu-Gi-Oh. The news articles and the song lyrics belong with their respective owners. I own the fanfics that I cook up from time to time. 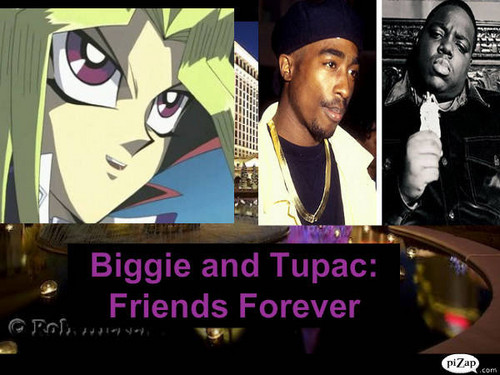 It is nighttime in California. Here I, Yami, sit and ponder about music and rappers. My necklace, which consists of two Y’s in a circle, hangs around my neck. My two friends, Notorious BIG and Tupac Shakur, were out making music. But I am worried about this… feud between the East and West Coasts. They call it the West and East Coast war, or the Hip Hop Feud.

I smile as I remember the lyrics to Goin’ Back to Cali by Biggie. He is such a talented artist with his rapping skills, heavy flow and beautiful but dark lyrics. As for Tupac, he really inspires me with his poetry. Sometimes, he tells me some poems he works on and asks for my help, which I am all too happy to do. I once told him that I am very well versed in the subject of dreams, and he and Biggie were very surprised, as well as very intrigued.

“You should write poetry about that,” Tupac suggested, and I did just that.

When I finished the poem, which I titled “Dreams”, I signed it,
“For my best friends, Biggie and Tupac.”

This touched them, and I told them, after copying the poem, that they could keep it, and they did.

The feud had torn Biggie and Tupac apart. I knew that they probably never get the chance to rekindle their friendship. I know now that they are gone and they will never come back. Someone — I don’t know who — took away the lives of my two hip hop friends, my companions. I will not forget them… ever!

Tupac Shakur and Biggie Smalls (as the B.I.G. was also known) were shot dead in their cars within six months of each other in 1996 and 1997. This feud between former friends began in 1994 when Tupac was shot five times, believing Biggie knew of the attack and failed to warn him. What ensued were verbal assaults on recorded material and attacks on friends of each of the rappers — and the hip hop world had a war on its hands. Both murders remain a mystery, but theories abound as to who was and wasn’t involved, and a lot of bad blood remains between those closest to the pair.

Of course, I know they are watching over me…

The circumstances of these two deaths were remarkably similar. Both young men were shot multiple times while sitting in the front passenger seats of their vehicles. Both victims were rushed to the hospital by their own entourages. Notorious B.I.G., who was born Christopher Wallace and was also known as Biggie Smalls, was dead on arrival. Tupac Shakur lived for six days and endured multiple operations before succumbing to his wounds.

Both incidents followed major public events and took place on crowded streets. Shakur was killed in Las Vegas. Notorious B.I.G. was gunned down in Los Angeles. In both instances, witnesses refused to come forward and help the police. Gang enmity between the Bloods and the Crips appears to have played a part in both murders.

They may be gone physically. However, I will always have memories of them in my heart.

Despite exhaustive police efforts and investigative reporting in the press, the murders of Tupac Shakur and Notorious B.I.G. remain unsolved. Rumors and theories have proliferated in the years since their deaths. Some believe that Shakur’s murder was ordered by B.I.G. who in turn was murdered by Death Row loyalists and carried out by members of the Bloods, some of whom were also California police officers. Others feel that the murders were a deliberate attempt to escalate the East Coast-West Coast feud and keep rap in the headlines in order to sell records. It has also been suggested that Tupac Shakur and Notorious B.I.G. were innocent bystanders and that the intended targets were actually the CEOs, Suge Knight and Puffy Combs. And the ultimate conspiracy theory holds that the record executives conspired to have these artists killed because dead rappers—particularly rappers with legal problems that cost their companies money—are more profitable than live rappers.

The deaths of Tupac Shakur and Notorious B.I.G., just six months apart, are without a doubt related. But the question remains: Who killed them, and why?

Watch my life
Pass me by,
In the rear view mirror
Pictures frozen in time
Are becoming clearer
I don’t wanna waste another day
Stuck in the shadow of my mistakes
Yeah…

(Chorus)
‛Cause I want you,
And I feel you,
Crawling underneath my skin
Like a hunger,
Like a burning,
To find a place I’ve never been
Now I’m broken,
And I’m fading,
I’m half the man I thought I would be,
But you can have what’s left of me

I’ve been dying inside,
Little by little,
No where to go,
But going out of my mind
In endless circles,
Running from myself until
You gave me a reason for standing still

And I want you,
And I feel you
Crawling underneath my skin
Like a hunger,
Like a burning,
To find a place I’ve never been
Now I’m broken
And I’m fading,
I’m half the man I thought I would be,
But you can have what’s left of me

I’m falling faster,
Barely breathing,
Give me something
To believe in
Tell me it’s not all in my head

‛Cause I want you,
And I feel you,
Crawling underneath my skin
Like a hunger,
Like a burning,
To find a place I’ve never been
Now I’m broken,
And I’m faded,
I’m half the man I thought I would be,
But you can have what’s left of me

I’ve been dying inside, you see
I’m going out of my mind
Out of my mind
I’m just running in circles all the time

Nice feedback is very much appreciated, of course.. :)

TamiMikaelson as well as 1 guest left kudos on this work! (collapse)