Han and Leia have a fight after reuniting on Mako Ta

There is no specific timeline for when this takes place just a little in between. 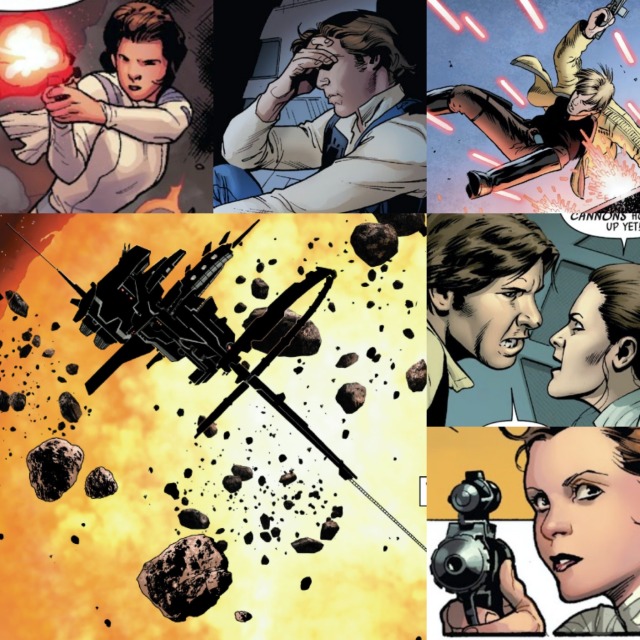 Han tossed and turned in his bunk, unable to get his fight with Leia out of his mind. The evening had started out so well. Leia’d had dinner with him, Luke and Chewie on the Falcon and it had been nice. Even nicer was how she left with Luke but circled back a few minutes later, jumping right into Han’s arms.

It was a rare quiet night for the rebels and she’d been giving him eyes all day. The foreplay of hidden looks had lasted all day, from the moment she’d greeted them at the Mako-Ta docks and until she’d snuck back onto the Falcon and finally climbed him like a tree.

He’d been away for a week and seeing her made Han’s heart beat faster than he’d admit. The whole time they were away he’d missed her, which was against her very strict rules.

She’d set the rules hours after their first time sleeping together, writing them up and handing them to him on a datacard to make it as impersonal as possible. He’d agreed, of course. No matter how infuriating he’d found the interaction after touching her, kissing her, being inside her, he couldn’t say no.

She was worse than spice and twice as powerful.

Han loved that he knew things about her that no one else did, that there were parts of her that would always be his. He wanted to find out all those hidden little secrets and collect them just for himself, to know Leia better than anyone; every scrap of information he found, he hid away for himself.

Leia would have never admitted to missing him but he could feel in the way she held him. It was a big night in Han’s opinion—she’d surprised him by letting him be on top, which put them face to face for the first time. Han couldn’t get enough of watching her face as they moved together, unravelling so close up. This time, she hadn’t pushed him away as soon as they were done, either.

Afterward she’d laid in his bunk with him and they’d actually talked. Han had asked her about what she’d done while he’d been away and she’d filled him in on some hilarious stories of the exploits of Luke and the other X-ing pilots. She’d been laughing at something he’d said when a lock of her usually neatly done up hair had fallen into her face. Before he could think about what he was doing, Han had pushed her hair back behind her ear.

Something expanded in Han’s chest as she looked up at him with her large liquid eyes. He’d traced his thumb along her cheekbone and moved his fingers into her braids. Han had kissed her then, and she’d hesitated for just a moment before returning his affections.

Their kisses had remained sweet and slow. Han’s fingers had moved on their own accord into Leia’s hair and he’d begun to undo her braids.

She’d frozen and, after a moment, Han had stopped.

“What?” he’d asked when she pulled away from him.

“Don’t touch my hair. Ever.” She faced away from him, holding her hair in place. She’d covered up her half-done hair the way most people would cover their nakedness.

Han was without words while she’d dressed, but found his voice before she left.

“Yeah goodnight to you, too, sweetheart,” he’d grunted out snidely.

“If you can’t follow the rules I’ve set out, then this is over.”

She hadn’t looked back before leaving the room, and a baffled Han, behind.

Hours later, he still couldn’t sleep. He rolled over and buried his head into his pillow before quickly throwing it to the ground and pounding a fist onto the bunk.

Knowing he was in for a long sleepless night, Han decided to take a walk, maybe train with his blaster for a bit, shooting something might make him feel better.

Mako Ta was the fanciest base the Rebellion had. It was state of the art, fitted out with a gymnasium that catered to all manner of sentients, and Han, though not usually the most athletic type, decided he wanted to work off some energy. The simulated battle course would suit him nicely.

Despite how late (or early really) it was in ship time, the gym had a good amount of beings using its facilities. A pair of Mirialans jogged past him on his way in and he could feel their eyes on him as they passed. He looked back over his shoulder and one of them was still admiring him. She was pretty, with yellow skin and dark matching tattoos on her cheek. She smiled at him in a knowing way and he took a moment to admire her, wink, and pretend he was interested in anyone but Leia.

He’d just passed a large swimming pool where all manner of aquatics were gathered when his attention was drawn to a growing crowd over by his planned destination. Han had no interest in running or swimming but he liked the obstacle courses that filled the back of the gymnasium. They required use of his mind, body, and blaster in concert, and exhausted him thoroughly. On this night, though, a small crowd was gathered around watching two people leaping and shooting in one of the holo simulations designed to look like a jungle from Yavin IV.

The course was set to look like the jungle planet and it featured holo Walkers and Stormtroopers, making the participants run through the simulated landscape while under attack.

Han stopped in his tracks when he identified the two humans as Luke and Leia. They worked perfectly together, almost like they were reading each other’s every thought. There were no words between the two, but they covered each other from the fake blaster fire as they ran on the fast treadmill turned jungle.

The courses were beautifully done, created to feel truly real. The user could even add heat, cold, precipitation, and adjust the pain level for the blaster fire. Leia’s brow was covered in sweat, flyaway hairs plastered to her face, which was filled with intense focus, but also a type of exhilaration he’d come to look for in her.

The Leia Organa who always acted so serious actually craved adventure and excitement. It was the look she wore when they were sneaking around, but here she was wearing a similar look as she ran the course with Luke. Han wanted to walk away, but the strange battle dance that she and Luke were performing was difficult to look away from.

Leia in particular was a wonder as she leapt over surprise barriers and dodged oncoming hits like a born warrior.

Force, he was falling for this woman.

The end of the course was signified by two X-wings waiting in the holo hangar, and when they reached their goal the small crowd cheered. Luke and Leia waited for a score to come up and, unsurprising to all who’d been watching, they took the top spot. Leia let out an uncharacteristic whoop and launched herself at Luke, who spun her around.

The onlookers moved forward to talk to them as Han decided it was time he left.

She looked happy; he didn’t want to ruin that.

He was so deep into his own self-pitying thoughts that he hadn’t heard the running footsteps behind him.

He was so shocked to hear Leia’s out of breath voice that he stopped fast.

“Good performance out there, Your Highness,” Han spat out as she came into his vision.

Her face transformed from curious, to irritated, to forced calm in a matter of seconds and he watched her take a deep breath to calm herself.

Convinced he’d not heard her right, Han just gaped at her, surely she could not be apologizing again.

“Did you hear me? ‘Cause I’m not saying it again.”

After that he was sure he’d actually heard her and he rolled his eyes.

“Look I’m trying to apologize, it’s just—” her voice lowered and she looked around, “Hair, specifically, unbraiding a woman’s hair, is very… intimate… on Alderaan.”

When she realized she’d referred to her home planet in the present tense, she flinched.

“Was intimate on Alderaan, and it’s still that way for my people. I realize that you were not aware of that custom, so, I’m sorry for getting angry.”

Her face was red from the running but he could tell the apology was also contributing to the blush, and hearing her actually talk about her lost homeworld caused a pang in his chest.

“It’s alright, Princess, thanks,” he waved it off, as if he hadn’t been losing sleep over the whole thing.

They stood there distinctly uncomfortable for a few seconds, Leia still catching her breath, until Han hooked a thumb back over his shoulder, indicating the course she’d just finished.

“I meant it, by the way, nice work out there. You guys are a good team.” He really hadn’t meant for the last part to sound bitter but somehow it left his mouth that way.

If Leia noticed the slight venom in his voice, she didn’t show it.

“Yeah, well, it’s not really fair when I’m teamed up with a Jedi in training; of course he’s going to win.”

Han shrugged. “I don’t know. I’ve seen Luke run that course with others and even alone, he’s never done so well.”

He didn’t know why he persisted; it was like the need to push on a bruise or pick at a hangnail, he couldn't help digging his grave deeper.

Eyebrows drawn, Leia looked away and said, “I guess.”

They were silent again for another moment until Luke’s excited shout broke them out of their awkward spell.

“Han, old buddy! How are ya? Did you just see that? Leia and I broke the record!” Luke’s face was pure joy and Han couldn’t help but return the smile.

“Yeah, good work, kid, they’ll have to invent a new level just for you two!”

“Join us next time! I bet with the three of us we can beat the trio round too!”

Han chuckled and didn’t meet Leia’s eyes. “Sure, next time.”

Both Han and Leia noticed Luke’s eyes trail away to see Wedge entering the gym.

“I’ve got to tell Wedge, he’ll be so mad! Night guys!” Luke looked down at his chrono and shrugged. “Or morning I guess,” he corrected, and jogged off.

Han and Leia’s eyes met then.

They nodded at each other and hurried off in random, opposite directions. Han looked back over his shoulder for just a moment to catch her retreating back, but he turned away before he caught her own last look.

She’d be the death of him.