Evolution over time of the main Holmesian fandoms on AO3

Thank you to Franzeska for showing me how to get the data to do this analysis!

Arthur Conan Doyle's Sherlock Holmes stories have been adapted many times for the big and small screen, as well as in the form of pastiche novels, comics, stageplays etc. Many of these adaptations have inspired fanworks, as have--of course--the original stories. Several highly popular adaptations have come out during the time period in which AO3 has existed, so I thought I'd use AO3 to take a look at the popularity of different Holmesian 'verses over time.

Each point on the graphs below is the number of works tagged with the specified fandom posted to AO3 within each six-month period.

The patterns we see in the graphs below might show fandom popularity waxing and waning, but they might also be caused by other factors, such as people migrating to AO3 or away from AO3 to other platforms. I'll discuss that in a bit more detail later on.

Comparison of the four fandom tags over time

Firstly, here are all four fandom tags plotted together for comparison. Note that the vertical axis is broken in two, with a different scale on the top and bottom halves, so that I could get "Sherlock (TV)" into the same graphic as the other three tags, even though it's so much bigger. 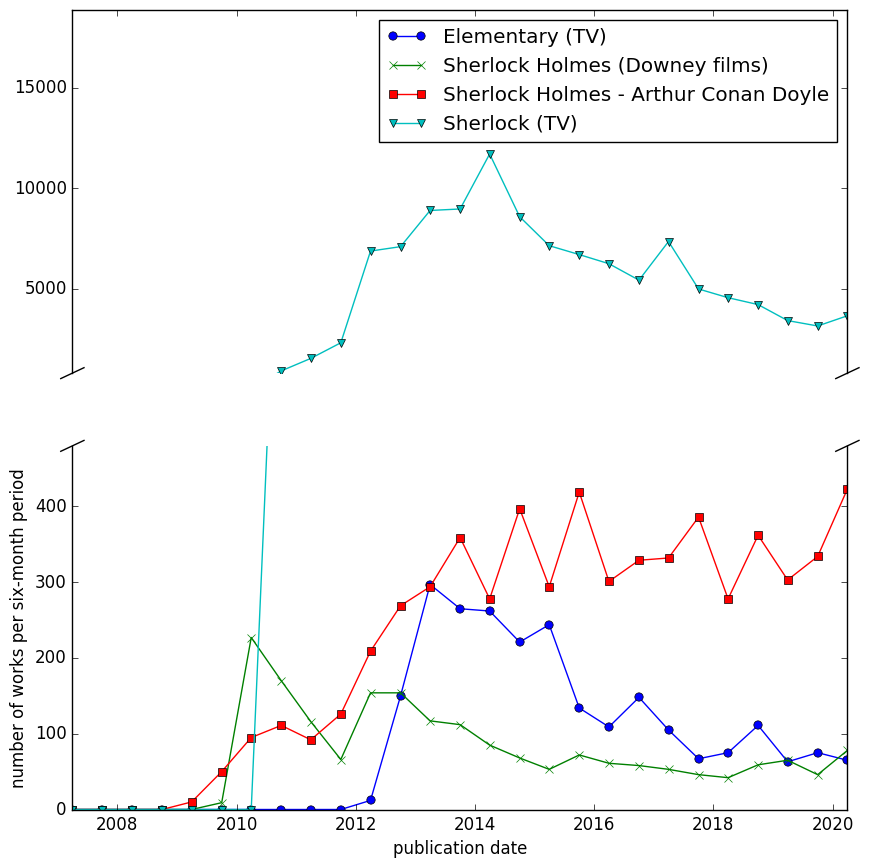 Next, I'll go through each of the fandom tags individually, including season air dates and film release dates in each graphic.

The "Sherlock (TV)" tag is used for the TV show often referred to as "BBC Sherlock", a modern-day adaptation shown on the BBC from 2010 to 2017. This one is huge! The number of works posted is several orders of magnitude greater than for any of the other 'verses I looked at. 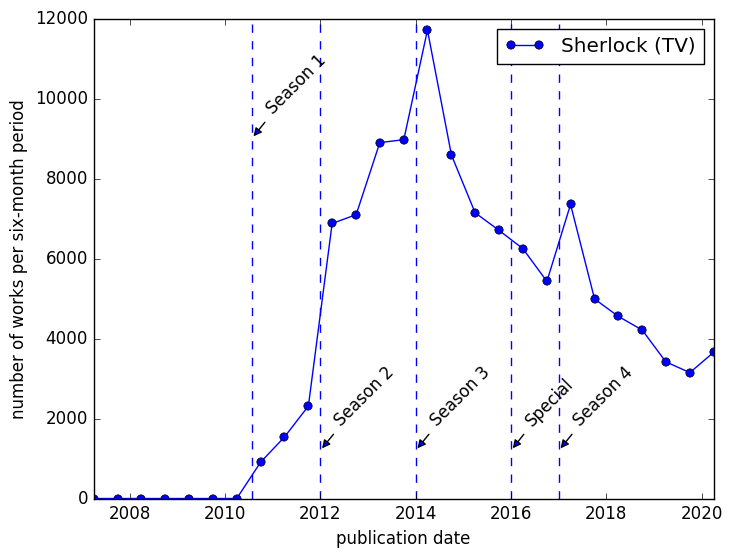 The fandom really exploded on AO3 when Season 2 began. Seasons 3 and 4 also brought renewed interest in creating fanworks. The peak came during Season 3, and then the number of fanworks being posted started to decline.

Interestingly, the Special in between Seasons 3 and 4 did not cause any notable spike in the number of fanworks being posted to AO3. But this Special is apparently set in the Victorian era, instead of in the 21st century as for the other episodes, so maybe fanwork creators felt that the characters were not quite the same people, or that the plot was not really part of "BBC Sherlock canon", and did not feel so inspired?

I have only seen the first season of this show, so I am not really qualified to guess the factors behind the patterns seen above. I would be very interested to hear the opinion of someone who is more familiar with the show than me! 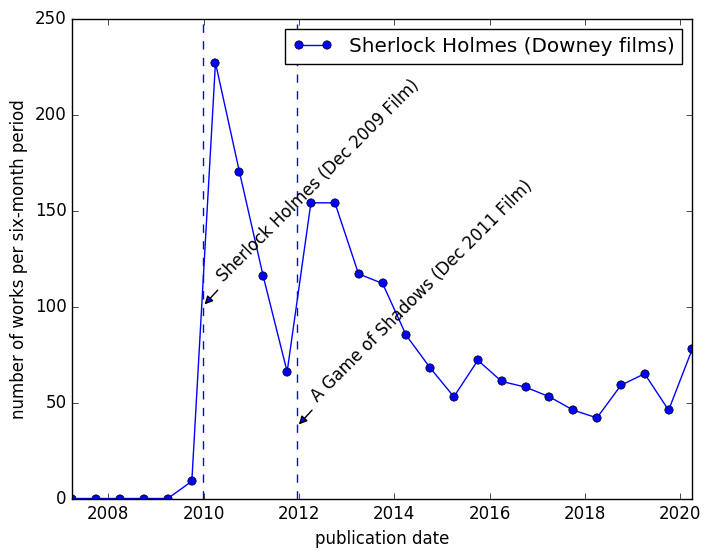 The films came out in late December 2009 and late December 2011. We see a spike in fanwork production after each film is released, followed by a fairly rapid decline. This pattern is very common for film-based fandoms. See for example this analysis of several movie fandoms by Franzeska and toastystats. Since 2015, interestingly, fanwork production in the Ritchieverse appears to have stabilised and is still going strong, with a small but consistent number of works being posted each year (about 50 per six-month period or 100 per year).

I don't think we should directly compare the heights of the two peaks. Since AO3 went into open beta in November 2009, it's likely that less creators of "Sherlock Holmes (Downey films)" works had migrated to the platform by January 2010 than was the case after the second film in January 2012. If AO3 had gone into open beta earlier, or the first film had come out later, then probably the first peak would be even higher than it is. (Personally, I did all my Ritchieverse fic reading and writing off AO3, even in 2012.)

The "Elementary (TV)" tag is used for CBS's modern adaptation set in New York, starring Jonny Lee Miller as Holmes and Lucy Liu as Watson. It ran from 2012 to 2019. 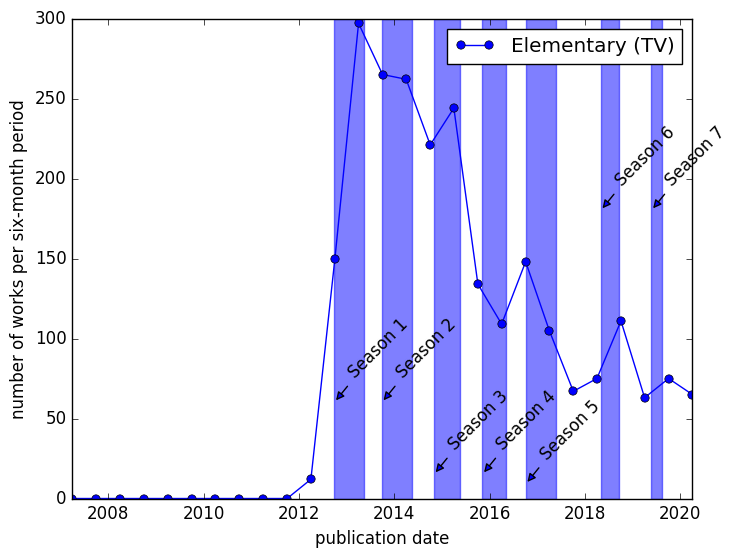 I don't know anything about this fandom, or have any idea what the main driving forces for fanwork creation were, but it seems they were most present in the earlier seasons, as that's when fanwork output peaked on AO3. The 7th and final season was broadcast in Summer 2019, so it's too early yet to say what fanwork production numbers will look like in the long term.

Again, I would be very interested to hear the opinion of someone who is more familiar with the show than me!

The "Sherlock Holmes - Arthur Conan Doyle" tag is used for works related to the stories written by Arthur Conan Doyle in the late 19th and early 20th centuries. In the graphic, we see a steady increase in the number of works with this AO3 tag between 2009 and 2014, and then a consistent output of about 350 works per half-year or 700 works per year on average. 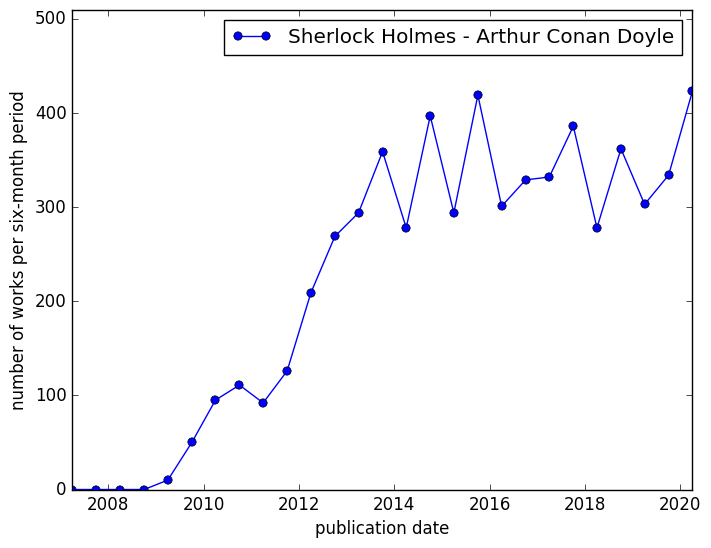 Something interesting is going on here. The patterns of evolution over time seen for works tagged BBC Sherlock, Elementary and Ritchieverse can probably be explained by airdates/release dates and content of episodes and films. But that's clearly not the case for the ACD stories, which were published over a century ago.

First of all, I wanted to check whether the pattern was driven by some other Holmesian adaptation, since I know that the "Sherlock Holmes - Arthur Conan Doyle" tag is often used as a secondary tag on works featuring characters from other 'verses. So I checked what percentage of works in each fandom tag are also tagged with at least one other Holmesian 'verse. 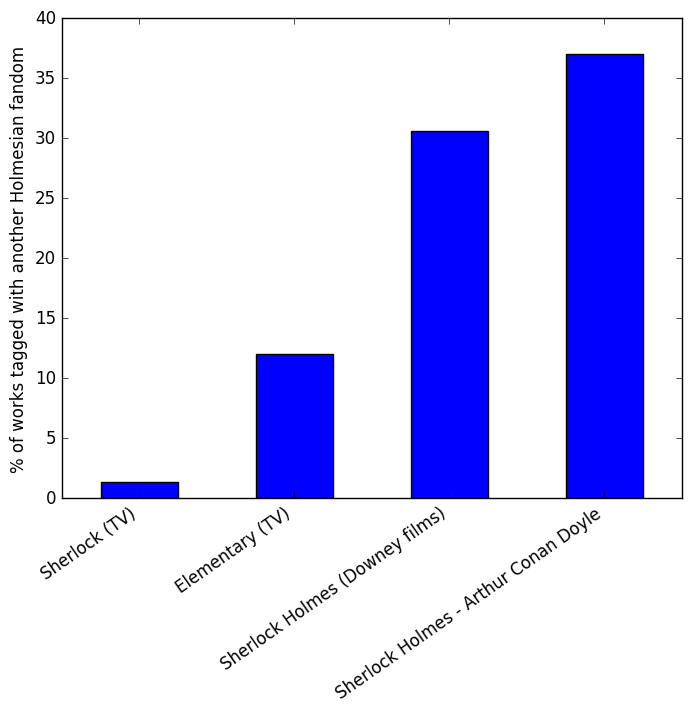 Next, I checked the evolution over time of works tagged with "Sherlock Holmes - Arthur Conan Doyle" only, excluding works with any other Holmesian fandom tag. That's shown in the line with green triangles in the graphic below. We still see exactly the same trend: an increase between 2009 and 2014 and then a plateau. 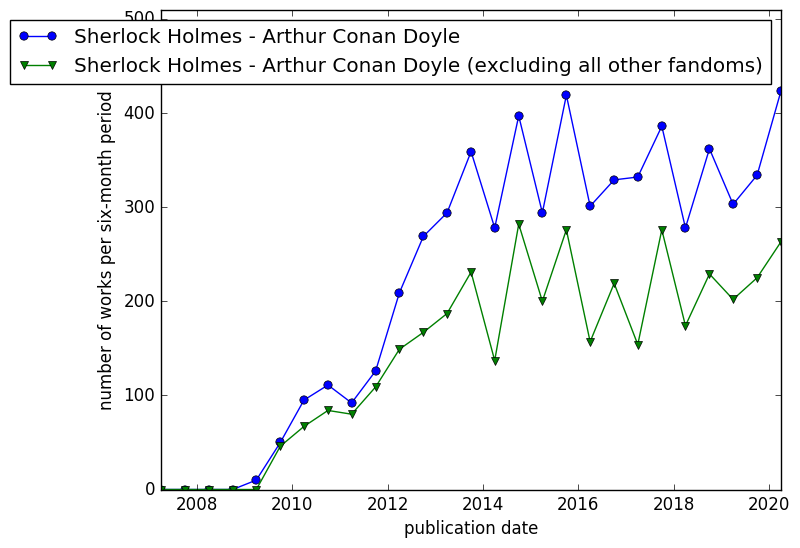 During the period 2009 to 2014, did the number of ACD works posted per year increase because more people were becoming interested in creating ACD works, or because existing ACD Holmes fans were migrating to AO3 from other platforms? It's impossible to be sure. However, 2010 to 2014 is the period in which the number of fanworks posted to AO3 for BBC Sherlock was also increasing, so I suspect that a certain number of creators were discovering an interest in Arthur Conan Doyle's characters via BBC Sherlock or other adaptations such as the Downey films.

Tracking the migration of Holmes fans to AO3

The Sherlock Holmes fandom predates AO3 by well over a century, and even for the three more recent adaptations I looked at here, a good part of the fanwork creation happened in the early days of AO3, when many creators were posting Holmesian works to other sites, but did not yet have AO3 accounts. As I mentioned several times above, this can make it difficult to interpret the above graphics. So I tried to come up with a way to track the migration of Holmes fans to AO3.

First, I wanted to look at the evolution over time of the number of active AO3 users. I couldn't find that data, so as a proxy for that, I looked at the total number of works posted to AO3 per half-year period. 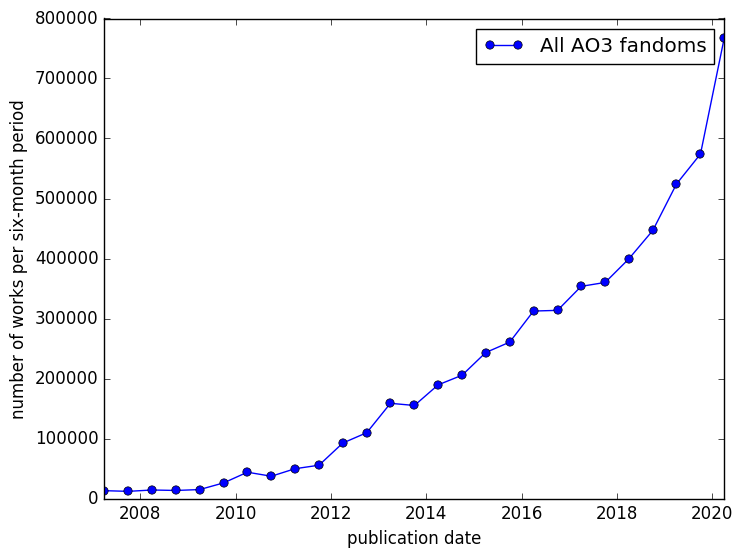 Clearly the number of active AO3 users is constantly increasing, including during the period 2010-2014 where we saw increases in the numbers of works being posted for various Holmes fandoms. However, lots of factors drive the migration of fanwork creators to AO3, and they are not all potentially interested in Sherlock Holmes fandom. If the number of user accounts on AO3 doubles, and the number of Holmesian fanworks being posted remains constant, then it doesn't make sense to say that interest in creating Holmesian fanworks has halved. So in the end I abandoned the idea of trying to use the total number of AO3 works to somehow rescale or normalize the graphics I posted above.

Next, I wondered whether I could use the Holmestice exchange to track the migration of Holmes fans to AO3. This exchange, which has been running twice-yearly since 2010, is open to fanworks for all versions of Sherlock Holmes. It was initially hosted on Livejournal. In Summer 2015, the exchange community experimented for the first time with the idea of having some works posted to AO3 instead of Livejournal, then in Winter 2015 switched back to hosting on Livejournal/Dreamwidth with optional cross-posting to AO3, then in Summer 2018 switched to the current model of allowing authors to choose between hosting on Dreamwidth or AO3. The period 2015 to 2020 doesn't match any of the periods of increase in the graphics above, in fact quite the opposite. So I abandoned that idea too!

Finally, here is the total number of works for all subfandoms of the "Sherlock Holmes & Related Fandoms" tag I found on AO3 with over 100 works as of August 2020. 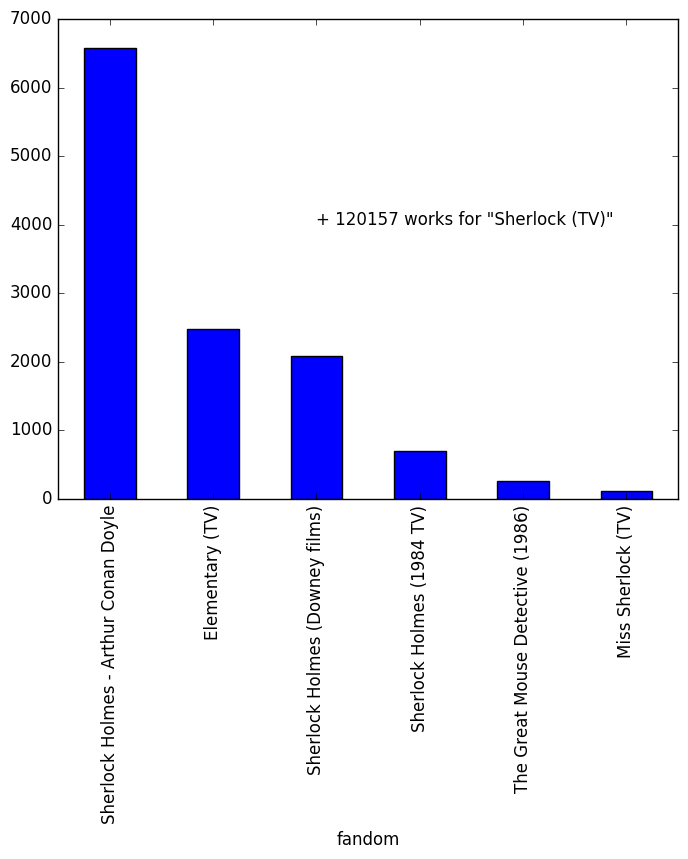