Stiles was minding his own business. For once he wasn’t working on some sort of weird plan, no one was threatening their peaceful lives and the hardest task he had to complete was picking a sauce for the nachos. He was just weighing up a bottle of cheese’s sauce and one of guacamole as Derek walked in the kitchen.

The world was facing a pandemic spread of a new terrible virus extremely contagious, and people were instructed to stay inside.

So he presented on Derek’s doorstep with a bag and a pizza demanding access to his big television. It had been a week since that and Stiles was feeling bored again.

He was so focused on his dilemma that he didn’t get Derek's intentions until two hands closed on the bottles and sent them flying over the room.
-
This story joins The Hot Wave
-
No nachos were hurt in the making of this story.
Can’t say the same about Stiles booty though. 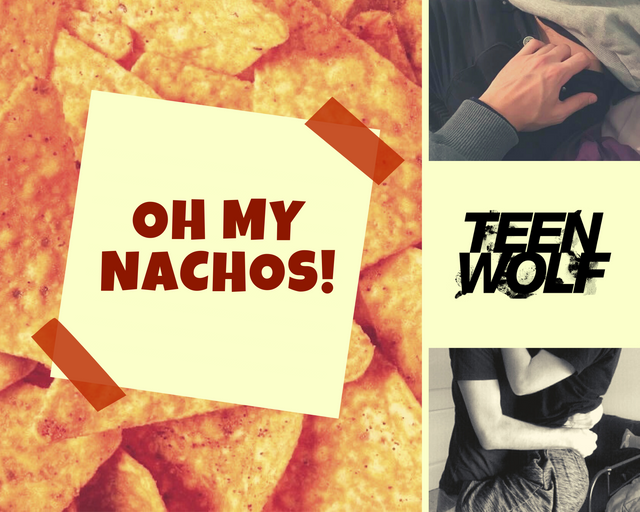 Stiles was minding his own business. For once he wasn’t working on some sort of weird plan, no one was threatening their peaceful lives and the hardest task he had to complete was picking a sauce for the nachos. He was just weighing up a bottle of cheese’s sauce and one of guacamole as Derek walked in the kitchen.

The world was facing a pandemic spread of a new terrible virus extremely contagious, and people were instructed to stay inside.

Since his father was very busy on patrol and the whole department was working overtime to face the emergency, Stiles spent most of his time alone at home. He lasted a couple of days then he collected his things and moved with his boyfriend in the middle of the night. He didn’t fancy staying at home alone with his worries so his father had mercy on him and gave his permission, aware that Stiles was going to do it anyway so he rather made sure he didn’t take any risk.

So he presented on Derek’s doorstep with a bag and a pizza demanding access to his big television. It had been a week since that and Stiles was feeling bored again.

He was so focused on his dilemma that he didn’t get Derek's intentions until two hands closed on the bottles and sent them flying over the room.

“We are already in that part of the relationship when food came first?” He growled on his lips before sucking his bottom lip.

He was smiling in the kiss and a rush of goosebumps went down on Styles back. He used that tone when he was going to wreck him.

“Mmmhh,” he moaned as the alpha went down mouthing his Adam’s apple. “Maybe you should do something to light up my interest.” He suggested teasing.

“If you light up more than this I’m afraid you may take on fire.” Said Derek thrusting up with his hips causing Stiles’ erection to brush against the leg he pressed between his. “Maybe I should punish you instead.”

Stiles liked very much where this was going.

“You big mainly alpha will punish his bratty boyfriend?” He said directly in Derek’s ear.

The alpha growled, flipping him and bending him over the counter.

He was already hard as a rock, his erection pressed against his ass through their clothes.

“Stiles,” whispered his dense voice, “I need something more… than the usual…” Stiles swallowed.

They had a talk about kinks, they even tried something but it felt like he had something specific in mind this time around.

“What are we talking about?” He asked, glancing over his shoulder. A smack hit him on his blind side. It wasn’t hard and it was muffled by the clothes.

But it went directly to Styles cock. He arched moaning.

Derek sneaked a hand around him, closing it on his hardness.

“Oh, someone is having fun by himself, do I need to spank you?” Shit, Stiles was already leaking, he wasn’t a damn teenager anymore but the strong grip that Derek had on him made him squirm. He felt so powerless, yet so safe.

“Use your words babe.”

“Yes! Please, I need…” He pushed his hips back against the alpha and another smack hit him on the right butt-cheek. He whimpered.

“Now now, you have to be extra good for me. Let’s see how the situation is.” He dragged down his sweatpants and his boxer in one go and left him butt-naked hanging over the kitchen counter, his feet barely touching the floor.

His hands left him completely and he could just hang in there waiting for the next move.

Which came as a direct strike which made him scream. Not because it was strong but he wasn’t expecting Derek to go straight to it.

A caress brushed over his offended skin.

“I want you glowing red,” commented Derek pitching him where the butt met his leg. Stiles whimpered in arousal, the forehead dropping against the counter just near the bowl of nachos long forgotten.

“Good boy.” Derek kissed the base of his back and let him feel just a hint of his fangs.

He trailed down until he was pressing his lips against his entrance.

His tongue came out to play lapping the ring of muscle before pressing forward. Derek really had a thing for eating him out. Making him come over and over until he was a mess. Styles had a theory, which was that Derek's real turn on was playing with his body and all of his kinks were just creative ways to do so.

He moaned as one finger went inside along with the tongue teasing his prostate. He had to grip the edge of the counter to not touch himself. He knew the alpha wouldn’t let his fingers get anywhere close to his cock.

Speaking of which, the pressure on his good spot was rapidly getting him close.

“Derek!” he screamed, feeling the orgasm building up fast.

He was going to come any second.

And just like that the stimulation was gone. Styles swore bucking his hips back but his orgasm was already subsiding.

“Someone is eager… be patient babe, I will make you feel so good…” He gave his entrance a last lap before he stood caressing his side and pressing himself forward until he could speak directly on his earlobe. “I will give you ten and I want you to count them. If you fail to do so we will start again. Will you be good for me?”

“I beg your pardon?”

“That’s better. You ready?” He lifted.

Styles simply nodded, looking tense and serene at the same time, and then shifted position slightly, bracing himself against the flat surface. He knew that Derek was going to give him a great time, all he had to do it was enjoy.

The first blow wasn't that hard, although his state of arousal made sure he felt it, and the next several blows landed at the same strength.

Styles did well, shouting the numbers loudly until he reached seven.

Then Derek suddenly hit lower, closer to his balls. He screamed arching, his feet scrambling to have some sort of purchase, but his toes barely touched the floor.

“Look like we need to start again.” Derek amusement was palpable.

Styles eyes widened, he could plead maybe. But somehow he felt like Derek loved his mistake, so he didn’t ask for forgiveness, instead he waved his butt.

“You are going to regret it so much.” The next hit was hard. He screamed panting hard.

“If you don’t count we may go on forever.” Stated Derek palming his offended ass. “I may not have time to fuck you before lunch.”

This time he was going to make it.

The strokes came down hard on his ass.

It felt like it went on forever but finally he screamed the tenth one trembling. His cock hard, his butt burning.

A finger opened him abruptly. He made a sound barely human.

Derek prepared him fast, adding a second finger almost immediately, scissoring them. The other hand was massaging his wrecked ass.

Suddenly, Derek took the fingers out and Styles realised that it was all the preparation he was going to have, Derek wanted him to feel it.

He rubbed his big cock in the crack of his ass, mimicking the sex act.

His head poke the entrance and Styles tried to follow the suggestion but it was hard. Derek was big, and even after all this time it kept feeling like he was splitting him.

At least Derek went slow. It took forever for him to bottom down. But he didn’t stop, he took it out slowly and pushed it in again at the same pace.

Soon it became unbearable. Styles was plenty relaxed now but it didn’t matter how much he begged Derek wouldn’t accelerate.

He tried to push himself back on the erection but another whip made him jump in surprised.

“Please…” He begged again and Derek rub his hands over his back to calm him.

“You have been good, I’ll fuck you as hard as you want.”

He took it out completely but before Styles could say anything he pushed it inside in one thrust. He groaned, the ball deep inside him starting an unforgiving pace keeping the boy pinned down with one hand between his shoulder blades and the other held firmly around his hip.

Styles screamed until his throat started to hurt. He was completely powerless under the superhuman strength of his boyfriend.

He felt his orgasm approaching and he reached down to stroke himself but Derek didn’t like it.

"You'll come from this, just from me inside you!" He ordered, his voice deep, holding his wrists up, pressing them on the side of his head.

Styles kicked blindly, moaning as the thick, hard length slid into him. He could feel his climax rising from his legs.

Derek grabbed his hips lifting them from the counter giving a series of strong thrusts up, nailing his prostate every single time.

His hands grip for purchase on the table, nails scraping along the flat surface that offers nothing for him to hold onto.

With a final strong thrust Derek pushed his forming knot inside and Styles came squirming as he was trying to get away from the overstimulation, not that he could escape Derek’s iron grip.

The knot grip grooving allowed Derek to give just small pushes until he pressed the smaller boy on the counter plastering himself on his back to push his cock as deep as he could.

Styles felt him tense and he was suddenly very full. Derek came hard biting his neck.

Unconsciously he noted that at some point he probably hit the bowl of nachos that now were sprawled everywhere. The bowl itself wasn’t in sight, there was the good chance it was on the floor broken in pieces.

The orgasm completely wiped out his mind.

Derek was leaving little kisses on his back stroking his sides.

“Sore.” Said Styles sleepy. He wished they made it on something soft instead of the hard counter, he realised he voiced his tough when Derek laughed behind him.

With some manoeuvring he managed to bring them on the couch where he curled around Styles to wait his knot went down.

“You own me nachos.” Said Styles at some point causing another laugh in his boyfriend.

“I’ll get them for you as soon as we untie, and you can mix guacamole and cheese sauce on it.”