Bad Luck and the Law of Averages

Nicky can't help assisting people in need, but this time he's being played and those duping him come with fangs. When he goes missing the whole team are frantic, particularly when they start having strange dreams, especially Joe. They have to find Nicky before it is too late.

Yes, of course I wrote vampires into TOG – it is my mission in life to write vampires in every fandom. 😂 You're welcome 🧛😂.
Seriously though – I hope everyone enjoys reading this one, I have so enjoyed writing it. Thanks to Soph for the beta (she keeps complaining that I am torturing her by sending her one chapter at a time 😂). 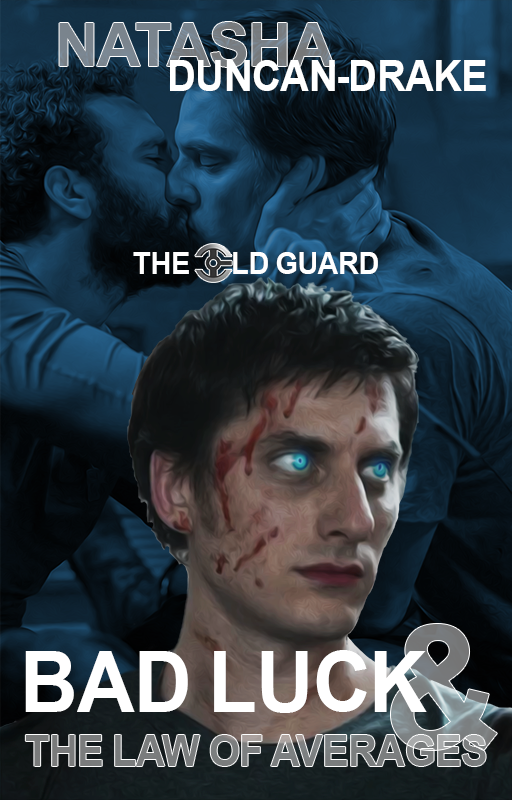 It had only been three months and two small missions since everything had almost gone to hell, but Andy had managed to get herself shot, again. It wasn't bad, not much more than a flesh wound in her upper thigh, but she was refusing to acknowledge that she actually had to rest to let it heal now. So, Nicky was on a mission of his own. If there was one thing that could bribe Andy into behaving, at least for a little while, it was her sweet tooth.

They were in Edinburgh laying low after their latest successful mission further south, one more drug ring would be looking for a new leader and new hierarchy for a while at least. Nicky had heard about a new little bakery that had started opening late when the clubs and pubs let out as a gimmick, but had grown to become a phenomenon and was now famous for pastries. He had left Joe and Nile trying to get Andy to stop reopening her wound with the promise that he would return with treasure that might get her to sit down for more than a minute at a time.

Of course, for a shop as hip as this one, there was a queue, so he joined it and pulled out his new phone (courtesy of Copely). He took a picture of the building opposite and sent it to Joe with the caption 'remember that little place in London'.

A few seconds later a text came back 'Of course, how could I forget, but please hurry, she is talking about leaving the house.'

'Will be as quick as I can,' he responded, and glanced hopefully at the queue.

It seemed to be moving at a decent rate.

He laughed when Joe sent back a gif of some slapstick comedy chase. He could only imagine how difficult Andy was being. He responded with a cat failing to cat and falling off a chair in a hilarious manner and looked down the queue again.

As he looked back at the screen he felt a momentary pang of loss, normally it would have been Booker sending ridiculous things, after all it was Booker who had insisted they all be up to date with modern technology, even if they weren't all one hundred percent good at it. Only Booker's considerable expertise had convinced Andy it was safe to have phones when he had first suggested them several years previously. These ones might have been courtesy of Copely, but it was the same principle.

He sighed and stared across the street for a moment. The anger at Booker's betrayal was still there, but it was no longer quite so fiery hot.

A scream shattered his contemplations. He looked up, eyes instantly zeroing in on a woman about one hundred metres up the road. She was on the edge of a streetlight and was struggling with a man who had grabbed her bag. Nicky noted two things instantly, the man was much bigger than she was, and her short coat was doing nothing to hide the bulge of pregnancy. When the man pushed her, she went down, and Nicky moved without even thinking about it.

He ran to her side, crossing the distance quickly, but the man was still disappearing round a corner when he reached his goal. For a moment he was torn between giving chase and helping the woman, but when she groaned, concern for her won out.

"Are you alright?" he asked, crouching down beside her.

She looked up at him, arm protectively around her baby bump.

"I will call an ambulance," he said, unlocking his phone again.

"The police then?" he suggested.

He really didn't want to deal with the authorities, but the poor woman had just been mugged.

"The moron only got my knitting bag," the woman said. "I had almost finished the baby blanket."

"It must have been precious," Nicky said, offering her his help as she tried to stand up, "you fought like a lioness."

She surprised him with a laugh.

"Pure instinct," she said as she was finally righted on her feet, "it's a shit blanket that I have made so many mistakes in that I should have unpicked it ages ago and started again. Thank you so much for helping. I'm Ruth."

"Nicky," he replied with a smile. "Are you sure you are uninjured?"

"Probably going to ache tomorrow," she said, "but nothing broken."

"Where were you going?" he asked. "Perhaps I can help you get there?"

"Maybe it would be best if you went back to your mum's?" Nicky suggested. "Just in case."

"Probably a plan," she agreed, "then I can blub on her when the shock hits."

"Would you allow me to escort you to make sure you get their safely?" he asked. "My husband would never forgive me if I allowed a lady to remain in danger, especially one expecting un bambino."

"Please," he interrupted her before she could say no. "It would ease my worry."

She smiled at him.

"It is nothing," he replied.

"Is she okay?" someone called from further down the street.

Nicky hovered very close to her as they began to walk, just in case, and kept his eyes out in case her assailant decided to have another go. What he really didn't expect as they turned into an alley was to find himself shoved up against the wall. Ruth was strong, very strong and he couldn't budge her grip as she flattened him against the brickwork, slamming his head into the wall.

"What..?" was about all he managed as he stared into her face.

Her eyes seemed to glow from within.

"Gets them every time," she said, and he couldn't look away.

He saw a large shadow out of the corner of his eye, and he recognised the trap he had fallen into.

"Sleep," she commanded, and her eyes seemed to flare in his vision.

Nicky tried to fight it, he really did, but it was like a tranq dart in the arm and his world faded away. His phone fell from his fingers and his last sensible thought was that Joe was going to lose it.

Joe was concerned the first time Nicky did not answer one of his texts, but he assumed his husband was busy buying the treasure he had been seeking. Joe sent another text a few minutes later, because occasionally Nicky became focused on things and forgot modern technology existed. When that received no response, he was worried. He picked up his phone and dialled.

"Nicky's not answering his phone," he said, striding into the kitchen where Nile was valiantly doing her best to keep Andy engaged in conversation.

"Twenty minutes," Joe replied, and it was beginning to feel like a lifetime.

When they had to go without communication for a valid reason, Joe was fine, but when it was unexplained, he went straight to 10 on the anxiety metre. After what they had been through recently, he was probably at an 11.

"You know where he went?" Andy asked, standing from where she had been sitting at the table.

"Let's go," was the simple command.

They were staying close to Edinburgh's old town and the bakery was only a short walk in the historic area of the city. Nile tried to suggest Andy stay at the house, but Joe didn't even try, he knew their leader would never sit this out.

"He must have been right here," Joe said as he saw the building Nicky had taken a snapshot of, "that was the bakery he was going to."

There was still a queue, but Andy marched right past it and through the door, glaring at the one person who chose to try and challenge her. She reappeared a second later with a young man in tow.

Her companion looked vaguely terrified, but when it came to making sure Nicky was safe, Joe didn't care what methods Andy used. The young man pointed up the road.

Andy nodded and strode off with Joe and Nile following quickly.

That sounded just like something Nicky would do. Actually, it sounded like something they'd all do, but no doubt Nicky had gone the extra mile, he was like that, just one of the things Joe loved about his eternal husband.

"The coverage isn't great everywhere here," Nile suggested as they zeroed in on the alley, "maybe he's out of cell range?"

Joe really hoped it was that simple and any minute Nicky would call and tell him he could stop worrying. However, the second he stepped into the alley, that hope died.

Andy put her arm out as he went to retrieve it, stopping him before he could move past her. She scanned the area quickly as Joe dug his fingernails into his palm to keep calm. The alley floor was tarmac, but covered in light mud where rainwater clearly ran down it regularly. There were footmarks all over it. All Joe could see was a muddle, but Andy had to have spotted something more.

"Two," she said, walking forward and reaching out to touch the wall above were Nicky's phone was lying. "There's blood here."

There was little light in the alley to distinguish anything, but Joe believed Andy one hundred percent.

"They went this way," she continued and pointed at the other end of the buildings.

Bending down she picked up and handed the phone to Joe before setting off.

"We'll find him," Nile said, touching Joe's arm. "They can't have got far, and they have no idea what they're up against."

He appreciated the sentiment, and he prayed she was right. He was already cursing himself for not going with Nicky on the excursion. He could not take Nicky being kidnapped, not again, not so soon, not without him.