The four-instalment story, in which Molly spots the couple three times, and witnesses the three different aspects of their relationship, not always on light and idyllic notes. Five years after the events on the cliff they are finally on a romantic trip, and so is Molly...in Barcelona.

The couple via Molly's perspective, while she is going through her personal revelations regarding their relationship and her past relationship with Will.

Can be read as a stand-alone - Instalment 4 - Caprice - What Molly didn’t see. 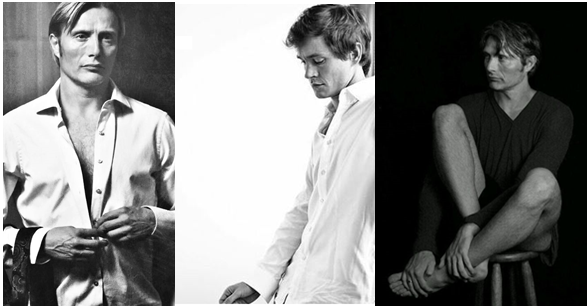 This is my first Hannibal fanfiction and contribution to BottomHannibalDay that happened thanks to great support from my beta, wonderful and patient theLadyLazaruss, who helped me to whip the story into shape. Hope you'll enjoy :)

This was supposed to be a romantic trip for two, but she has never felt more forlorn. The feeling of loneliness had nothing to do with the attitude of her new partner and everything with the absence of Walter. The first time in her life, she left her baby boy behind.

Undoubtedly, he is at an age where a family holiday is hardly an exciting thing, but the real reason for his unwillingness was …’  he is not interested in playing son to another dad. In fact, he has no interest in her partner at all.’

Walter’s words were harsh but genuine and certainly nothing new, yet they resonated in her mind all the way on the plane from Washington to Barcelona.

So she steps out into the morning street of this vibrant city with a plan, to transport herself from her reality into a different world, full of different people with different lives, she wants for a moment to lose herself in. What would they feel like?

She still has some time while Bruce is negotiating their accommodation with the receptionist. He is, generally said, a nice guy… and she, being a social butterfly, could not stay away from him. Yet, she is reluctant to marry again.

He is different though, by no means above-average bright, charming, nor attractive, but nor are his flaws close to the extreme, unlike Will’s. This time, she has got herself an average man for a normal life, her own Pier Bezuchov from the “War and Peace,” the story Will made her read once in an attempt to prove that ‘average’ was a most desirable trait. Somewhere deep inside her bruised soul, Molly still tries to understand him.

She sweeps her eyes around  Carrer de Rossello , glancing here and there at the passersby, but ensures no lingering looks, because she does not want to catch their attention or appear to be gawping.

In late September, the tourist crowd is not heavy; life in slow-motion is going by, like a strolling movie, people lounging around, or just sitting for coffee and tapas in beautiful restaurants. The Modernista  town gave her ample opportunities to observe the travellers’ fashions and attitudes, as she notices that almost every venue around has outdoor seating, or wall-sized windows, providing her with the best of views.

The upscale hotel across the narrow road is what she is aiming for. With its ghostly fingers, the morning mist rises up like a breath of the city and swirls around wild and curvy architecture, around nearby trees, giving the building a romantic, almost fairytale air.

Its street-level cafeteria is full of tourists, and the one sitting closest to the glassy wall - like they were in a showcase -, has caught her attention. Easy on the eye, he is casually elegant, svelte, his long legs are comfortably stretched beneath the small table as he is engrossed in reading a newspaper. A poster-perfect vacationer. He will hardly notice if she decides to pay him a little extra attention.

Yet soon, the scene from the static advertisement of a leisurely vacation morning in Barcelona springs into motion when… Will  brings two plates to the table with the main protagonist of her fantasy commercial. He is carrying croissants and some intricate delicacy for Hannibal Lecter.

At the display, the time chases to eat up seconds, minutes or maybe hours of her busy planned day for what she cares. She finds herself frozen in shock, ensnared in someone else's moment, in a simple act of her presumed-dead husband and his…  something  having breakfast.

Without Will by his side, she never would have recognised him, only from his dark, ominous depiction by the news or social media at home. More emotional than realistic, she developed her own image of Hannibal Lecter, a man sleek in appearance, with an aura of malevolent intent.

But none of that fit. Her concept of him, fed by journalists and Jack Catford’s scarce supply of characterisation, was rather a fit of fiction than an actual image of this man. Here, in the Spanish sun, is a regal gentleman who stole the show in the window front of the restaurant by his sheer presence.

His stubble is neatly trimmed and speckled with grey, alike his fair longish hair, left freely to ripple about his neck. His relaxed countenance deceives his age and the age gap between the two men. But this all pales in comparison to his eyes. Dark. Molten amber and earth, (beautiful; she finally understands why such a word appeared in a few comments she dared to read on his appearance in the Tattle Crime). Their undivided attention now is fixed on Will. Against her best imagination, they exude no threat or cold-calculated quality, but only fond appreciation, as Will gently nudges the plate with a heap of pastry and fruits against the newspaper in his hand. Instead of getting irritated, the serial killer flashes Will an utterly delighted smile.

Wandering back into the valley of their broken marriage, with a sting of pain, Molly admits, they had never complimented each other like this; in such genuine, affectionate ways. Yet, she shakes herself into the reality she has learned about the doctor Lecter and into his world where the word genuine  has no room.

He is just a carefully constructed façade -  and with a sudden cold jolt she must consent, as is Will.

The years have not spared him from a few more wrinkles. They are more profound around the eyes when he smiles back at his friend - his partner in crime . Here, a fitting appellation has naturally come to her mind.

She desperately wants to focus on Lecter while the opportunity lasts, learn as much about the man she has blamed for five years for ruining her life, but she can't. Her eyes are inevitably drawn to Will. Not because of the abundance of the unruly curls falling in his eyes, or the absence of his beard, not even because he cuts a stunning hunk, all in dark and ritzy casual, no. She can't look away because there is no careful politeness to him. Will looks  home  at Hannibal's side. (Has she already slipped onto first-name terms with that man?)

Will moves in and out of Hannibal's personal space, and Hannibal does the same in perfect sync. Without a preamble, he pushes his head next to Hannibal's, to see what is unusual in the news that he cannot put them away, and Hannibal lets him, and leans back to neatly fold the paper when the plate slides into the place in front of him.

The man is looking searchingly, with a skeptical face at his meal's content, certainly asking what it is; perhaps he does not like sweets for breakfast, unlike Will. And she watches how  her  Will, brusque and defensive toward a critique, only dashes him a rascal smile, then reaches out and with a single finger pushes up the spectacles falling low on Hannibal's nose when he wrinkles it in a pout. She is transfixed by this swift delicate touch, a deliberate move he was rarely generous with... towards her.

Reeling from a blow to blow, her mind feels arrested; she cannot react, cannot think. She just stands by, idly watching.

A waiter comes over, handing them the two steaming china cups, and there is another, bolder touch. Hannibal's nose hovers over freshly brewed coffee, as he inhales, what must be, an incredibly pleasant aroma. The steam courses up from the rich dark beverage, misting his spectacles, and Will reaches for them carefully, drawing them down and off Hannibal's face.

Hannibal holds still, patient, while Will neatly folds the frames, and when he secure them on the top of the newspaper, his mouth shapes - thank you - and bestows Will a subtle affectionate smile.

After that, she stares as her lost husband gazes over the rim of the cup at his partner, and she is not sure about the in crime or friend only  part of his assumed status anymore.

Will is neither awkward, or nervous, nor is he jerkily dropping his soft gaze in embarrassment. She observes his every smile and nod, scowl and grimace at something Hannibal says, while the other indulges in every expression Will’s animated face offers. Drinking coffee as he drinks from the sight of his partner.

At some point, with a feeling of rising sickness, she expects them to feed each other during their undying debate, but perhaps, Will stealing a piece of fruit from Hannibal’s plate does not count. It appears, as if they are engulfed in an aura of gentleness and affection, aside from which the outer world has ceased to exist for them, consuming their breakfast and their relationship.

“Molly, honey! The deal is done! You have the room you have originally booked. Come on, we must find a chocolate store; we owe big to this nice gal.” Her new partner sounds so proud of his accomplishment. It takes a great effort to shake off her first sightseeing adventure. Still, she manages to force a hearty smile in place, contrary to the ill-feeling in her stomach.

Bruce moves in front of her, into the crowd of people, hunting with their phones for the treasures amongst the city’s attractions, and she follows. A stray thought wanders by her; how come, upon seeing Hannibal Lecter, the word ‘monster,’ attached to him in every serious newspaper or tabloid, never entered her mind?

Perhaps, the moment she has stolen from their morning was too short for his façade of an amicable persona to slip, but even this reasoning sounds weak.

This is my take on S4 after the first time properly watching Hannibal on Ntflx and somehow, naturally it has ended up with Molly's POV. Hope, it's worthy to continue reading ;) Thanks!