Upon returning to a planet he'd visited long ago, the Doctor doesn't receive the welcome he'd anticipated. Worse, his new traveling companion is wrongfully accused of a serious crime and thrown into prison. How far must the Doctor go to prove his innocence? Second in the Twist of Tartan: The Next Chapter series.

Disclaimer: Not my characters, except for the original ones. This story and the series it belongs to are written for entertainment purposes only. No copyright infringement is intended. 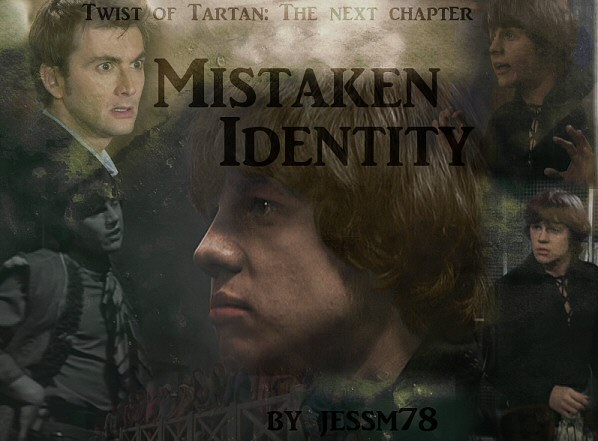 “Yep,” he replied, popping the 'p.' “Same nice, old planet.” He gave a casual shrug as he stuffed his hands inside his pockets. “Probably same nice, boring bunch of people ...” He trailed off and searched the area again, wondering where everyone was.

He didn't have to wait too long to find out, however, as a man in familiar garb suddenly appeared from behind the large obelisk at the center of the room and regarded them in horror.

“Hello!” the Time Lord greeted with a disarming smile and a wave.

The man said not a word and instead ran shouting in the other direction. Within moments, he was joined by a group of about six other civilians and three guards. None of them looked too pleased to see the travelers as they rushed forward, shouting angrily.

Eyes widened in disbelief, the Doctor felt his mouth drop open. “Hey!” he cried indignantly. “Last time I was here you at least treated me like a welcomed guest! What's all this for?!” He gestured to the weapons the guards had trained right on him and Jamie.

“You dare return after the heinous act you committed?” a middle-aged man spat out angrily, his eyes narrowed in a severe glare.

“Hey, hey, hey!” the Time Lord objected. “What 'heinous act'?!” He gently pushed the barrel of the guard's laser gun back from his chest. “Well, I think it's quite obvious what's going on here: Mistaken identity. I mean, yeah, I've aged a teeny, tiny bit since my last visit and I've decidedly gone ginger.” He gestured to his hair. “But you've clearly got the wrong bloke here!”

“Not you,” the man returned snidely, lips curled in a sneer. He turned and pointed to Jamie. “Him!!”

Jamie's eyes widened in shock and his jaw dropped to the ground. The Doctor looked on in horror as his young friend stared helplessly at the angry crowd who shouted and spit at him.