Sana and Leia get a chance to discuss Han, much to his consternation.

In the issues right before this we’d been introduced to Sana Starros, a smuggler and Han’s ex. Last time she’d seen Han he’d run off with her side of the money from a job so she’s determined to get her money back and will hang around until she does. She’s an awesome character so I thought it would be fun to explore the blossoming friendship between her and Leia.

*Not fitting with the movie Solo mostly just cause I had not seen it when I wrote this but also cause I like my story of Chewie's rescue better. 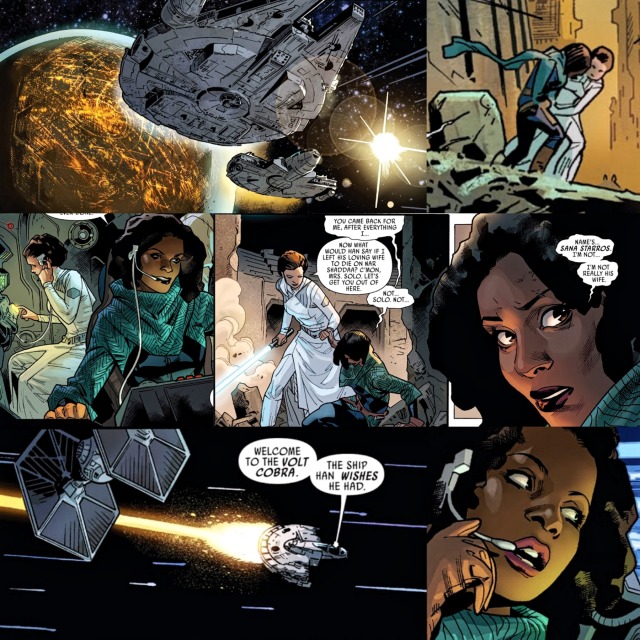 Leia helped Sana onto her ship and, despite Han’s vehement protestations, she decided to help Sana pilot to the Rebel Fleet, since she was badly in need of medical attention.

“Yesterday she was planning on turning you over to the Empire!” Han followed behind the two women as they limped into the Volt Cobra.

“Calm down Han, she’s hurt and I can take care of myself.” She settled Sana in one of the passenger seats and turned to take the pilot’s chair, but she was stopped in her tracks by Han. He was not budging.“Get out of here, Solo. I won’t blast your girlfriend, I can hardly move.” Sana said through gritted teeth.

Both Han and Leia started protesting at the same time but stopped when Sana started laughing.

Her laughter cut short as she grimaced in pain. “Ouch! Can we please leave?”

Leia shoved Han out of her path and took the pilot’s seat.

Refusing to leave, Han leaned over the controls, watching Leia. “Can you drive this thing, Your Highness?”

The look she gave him would have killed lesser men, but Han had dealt with his fair share of angry women and, while she was definitely in the top 5 most dangerous, he still was fairly sure he could take her.

“You should leave now before we get any idea about your bounty.” Sana coughed behind them.

“Whatever Sana, s’not too late for all of us to just take the Falcon.” He looked at Leia hopefully, who just rolled her eyes.

“I’m going to drop Sana and her ship off at the medical frigate and then I’ll meet you guys back on Home One.”

“We’ll fill the time with stories from your pre-rebel days.” Sana grinned evilly at Han, and he blanched.

“Sounds good to me!” Leia smiled brightly, “Now get off my ship, Solo.”

Once they reached hyperspace, Leia went to help Sana into the back to lay down. A couple pain shots later and she was in good spirits.

“So what d’ya wanna know about Han?” Sana asked as the princess finished sewing up a gash on Sana’s arm.

Leia shook her head, “Anything I can use to make fun of him will work.”

The smuggler’s grin grew. “Oh, I have plenty of those.”

Before Sana could start, Leia paused and looked up. “How did he earn his bloodstripes?”

Sana seemed to sag slightly but nodded. “He’d hate for me to tell you—”

A battle was fought in Leia between her curiosity about the Corellian and her grudging respect for his privacy. Curiosity won out, and it looked like Sana was going to tell her anyway, so Leia just nodded for her to continue.

“Well, how much do you know about Corellian bloodstripes?”

“They’re given out by the Corellian military for acts of heroism.”

Leia’s brow furrowed. “Isn’t that why he got kicked out of imperial service?”

“You have to understand that bloodstripes are given out for standing up to your own personal beliefs—Corellians are big on that kind of shit, even if it means going against the law. And it's not given out by the Empire, it is given out by the Corellians. The Empire can't strip someone of bloodstripes either, it’s a part of some kind of weird agreement they have with the Corellian military. The Empire will do almost anything to keep them as in line as Corellians can ever be. I guess as he was on his way out, some high ranking official was impressed.” Sana shrugged and then winced in pain from the movement.

“What about the first class stripes?” Leia asked after a silent moment.

“I actually don’t know that one. Far as I know, he’s never told anyone. Chewie might know, I guess. It’s weird because those ones are usually given out posthumously, they’re kind of a big deal.”

Nearly every time he opened his mouth, he was bragging about the kriffing Kessel Run or his old ship, but not once had he mentioned these major awards. He was certainly a conundrum.

Sana laughed. “You’re trying to figure out how such an idiot can be such a hero? Who knows.”

Leia smiled and finished up the stitches. “Alright Mrs. Solo,” she said, making Sana chuckle despite the pain, “time for you to rest up a bit.”

Leia made sure she was comfortable before returning to the cockpit, pondering the mysterious Han Solo.