A little something that could take place after Star Wars (2015) #42
The Rebellion teams up with the Partisans on Jedha to prevent the Empire from destroying the remainder of the planet. While there, Han reluctantly takes up the mantle of leadership. Leia is impressed, and dare I say turned on, by Han in a place of leadership.

Thank you to OtterAndTerrier for being my beta and debating the lack of good words for male genitalia :) 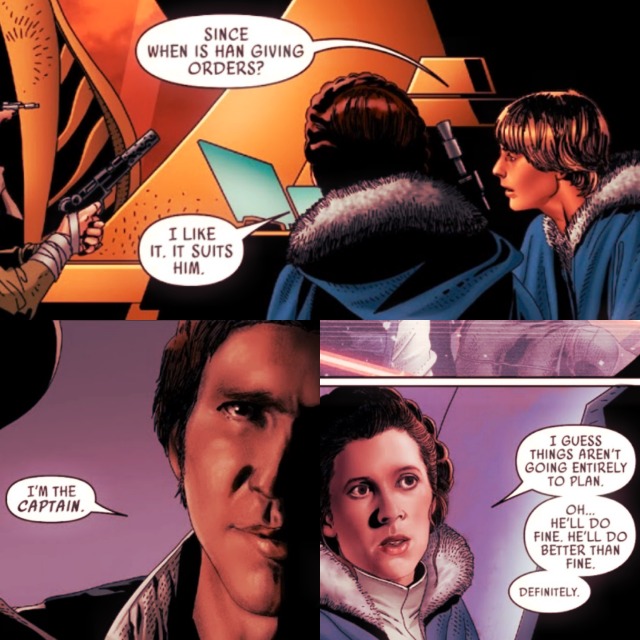 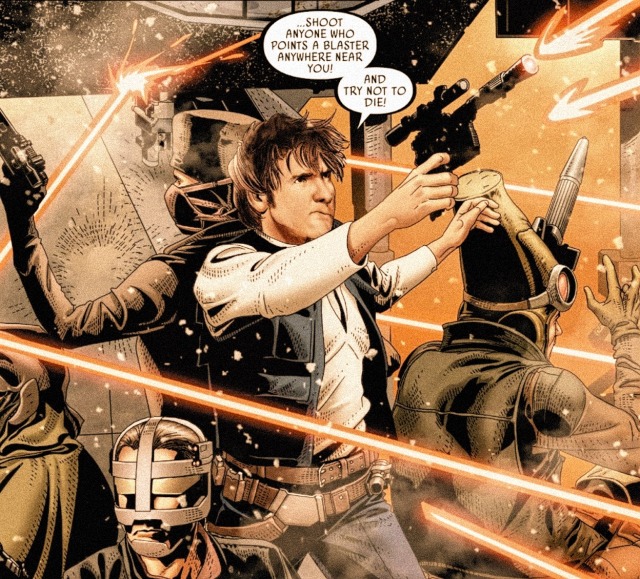 For all his whining about it, Han hadn’t minded being in command that much. He wouldn’t be racing to do it again but it felt good to lead the Partisans in their most recent strike on Jedha. When he thought back at the incredible responsibility of leading, his thoughts strayed, as they often did, to Leia. He reflected on her in silent wonder, as he began to prepare for sleep, the amount of strength it must take her to lead that many people into so many dangerous situations floored him.

Recalling the bright smile and kiss on the cheek he’d received from her with a smile, he wondered if he could try out command more often.

As soon as the thought arrived, he shook his head. It just wasn’t in the cards for him. He was a smuggler and, sure, Captain of the Falcon, but he was no leader.

He hardly had a moment to register the whooshes of the door opening and closing before Leia was on him.

Startled, Han’s head cracked lightly against metal but he didn’t complain. His mind was now elsewhere. He’d been unable to brace himself when the small princess had shoved him up against the bulkhead. He might have minded the jarring hit if not for the desperate way she was kissing him. The pain in his head seemed to evaporate as quickly as his cock started to harden.

When her mouth moved to his jaw, giving them both a moment to breathe, he finally asked, “What’s this all about Your Highness? I don’t think I’ve ever seen you this worked up.”

He tried to sound his normal brand of smooth and confident but, in the middle of his question, her palm flattened against his growing erection, ruining any attempt at smugness.

“Shut up Han,” she whispered harshly against his neck.

The part of his brain that loved to tease her was so tempted to continue but the smarter part kicked in before he could speak.

He gasped in a highly unmanly way when Leia, who had just finished working off his belt and unzipping his fly in record time, began lowering herself to her knees. Han looked around as if expecting someone else to verify he was alive and hadn’t actually gone over the edge of the hole on Jedha. But there was no one there; they were alone in the captain’s quarters, where he’d been ambushed by the princess minutes before.

He looked down at her with wide eyes while she smirked up at him and wrapped her hand around his erection. She moved her hand up and down with the natural command she brought to everything she did.

“Why so quiet, Captain?”

Han wanted to speak but no words came to mind---even if there had been any, it didn’t matter, because he lost the ability to speak when she ran her tongue up the side of his cock. Her huge brown eyes never left his as she took him into her mouth and moved her tongue around in a way that told him it was not her first time.

When her tongue brushed purposefully along the sensitive stretch of skin on the underside of his shaft, he couldn’t stop his loud moan. She gently slapped his leg to get his attention before shooting a meaningful glance at the closed door.

He nodded, silently begging her to continue. As if to confirm he wasn’t dead, he began to tangle his fingers into her hair. Her braids were loose after a long day of skullduggery against the Empire and Han wanted so badly to gently free the long brown strands but he resisted, remembering her reaction the last time he touched her hair.

Fearing she’d see his raging emotions, Han closed his eyes. Moments later, at the feeling of her thumb nail gently running against the underside of his cock, he came. His hand flew up to his mouth to stop from yelling her name.

Everything faded for an indeterminable amount of time. The next thing Han was aware of was Leia tucking him back inside his pants. He rushed to help her up, suddenly feeling uncharacteristically chivalrous.

Leia leaned forward to put her lips next to his ear and whispered, “I like you in command, you should do it more often.”

She followed this with a searing kiss that brought movement back to Han’s limbs as he prepared to gladly return the favor.

Before he could begin, she pulled away.

“Good work out there today Captain.”

With a final chaste kiss and a pat to the cheek, she exited the room, leaving Han ready and willing to lead the next mission.