Sometimes arrows miss and lead us to the truth

Rey is a fae. Ben is a lumberjack.

Chapter 1: I'll find some way through to you 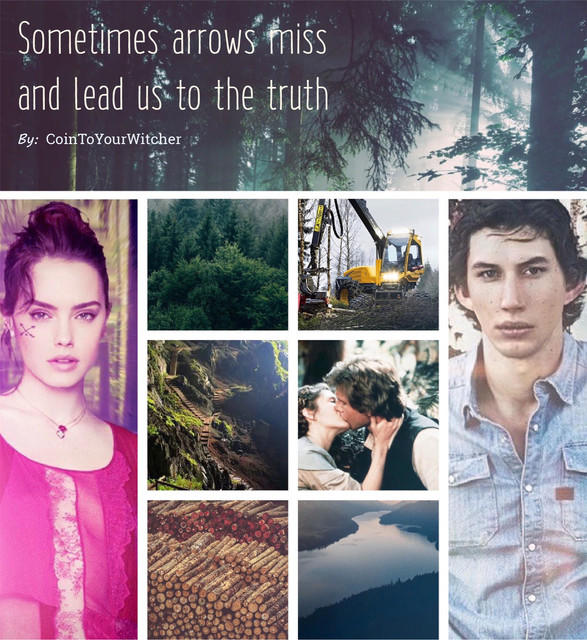 “Asshole,” Rey muttered to herself, watching the dark-haired human operate his machine.

It’s claw grabbed a pine, it’s saw sliced through the trunk, the claw released it’s grip, and the tree fell, it’s branches stripped on the way down. Then the claw tossed it in a pile next to the river where it would be floated down to the logging camp.

So efficient. A one hundred-year-old tree. Gone in ten seconds.

She knew his name was ‘Kylo’ because they called his name over the radio several times a day. The radio was loud as well. Not nearly as bad as his big bulldozer machine, but it was crackly and annoying just the same.

He blinked when he saw her, shutting down the machine and picking up the radio receiver.

“Uh..a young woman is coming towards me? Did we know people lived out here?” he said quickly.

“Is she pretty?” came a joking reply.

He didn’t respond, seeing Rey stop next to his machine.

“You can answer him,” Rey said, giving Kylo a smile.

He swallowed, raising the receiver back to his mouth. “Yes.” Then switched off his radio before his friend could speak again.

“Can I help you? Are you lost or...maybe doing a photo shoot or something?” He asked, nervously looking around.

But it was just them and the forest. There wasn’t anyone for miles and miles. His kind were back at the logging camp, where he’d come by boat today, and her colony was a three day’s walk.

Rey didn’t answer, simply biting her lip, letting the glamour do its job, hitting him with wave after wave of intoxicating pheromones at close range, until he stumbled, half-drunk out of the machine.

Maybe she had overdone it.

“My name’s Rey,” she said, looking down at him, sitting on his knees, swaying slightly. “And you’re Kylo, right?”

He was pressing his palms to his forehead now, looking like she’d taken him straight past the high and right into paranoia.

“Sorry, I’m new to all this,” she said, sitting down in front of him and crossing her legs. “I imagine I’m a bit like one of those baby snakes that doesn’t know how much venom to use. Deadlier, the younger they are.”

Waiting for him to calm down, she rubbed his blue-jeaned leg, comfortingly. “Do you need anything? Water? Human food?”

He chuckled then, watching her hand on his leg.

Oh, she should have just said ‘food’. But the Fae always referred to that packaged crap from grocery stores as ‘human food’, and it was a hard habit to break.

She’d only spoken to a few humans before: hikers, the children the colony was raising--because their human parents were doing a shit job of it, park rangers.

His eyes looked a little less glazed, so she started talking. “This is my forest. It was given to me a year ago on my third birthday and I’m technically supposed to kill you for taking what is mine.”

He tried to speak, his eyebrows knitting, but she held a finger to his lips, leaning closer, close enough to smell the cotton plants that were shredded to make his denim shirt. He sat back on his butt, his legs to either side of her as she inched right up to him, until she could see every beauty mark on his face, until he was looking at her almost cross-eyed.

“Shhh, just listen, because I’m not going to kill you. I don’t think you’re all bad. I think you might be able to change. I think you were raised to not care if someone killed an animal for you to eat and forests were destroyed for your paper. I’m going to make a fairy bargain with you. This is your one chance, are you listening?”

Rey straddled him, wrapping his arms around her waist, “I’m taking a very big risk for you, so consider my offer seriously.”

“What?” He said softly, very confused and squinty, his gaze on her lips.

“You have to look at my eyes, though,” Rey instructed, waiting for his adorable brown eyes to find hers.

“Good,” she said, starting the fairy bargain, speaking slow and clear. “You will dismantle this machine, so that no one can ever use it again. Then you will leave here forever,” she said, unblinking, drawing his air into her lungs, holding his shirt tight so he didn’t fall backwards.

“It gets lonely here. I’m going to miss you,” Rey whispered, tasting his lips once with hers, the kiss sealing the deal.

Kylo twisted to look at his machine, mad at it now, but she turned his face back to her. “Not yet, not yet,” she said, urgently, squirming in his lap. “I want to play with you before you go,” she said, kissing him again and smiling when his arms tightened around her.

He slipped his tongue into her mouth, which was very forward of him, but that was part of the charm--that human men took what they wanted.

His hands moved down to her hips, already inching her dress up, so she reached between them, fumbling with the strangeness of his human clothes, trying to free him because she could feel his want straining tight against the fabric. His hands moved down when she couldn’t figure it out and he did it for her, then he lunged forward, pinning her on her back in the moss and driving himself into her, a low groan escaping his mouth.

“Ah!” she cried, not expecting the pain, but then it was overpowered by the feel of slippery friction.

He probably would have gone slower if he were in his right mind. Fae weren’t supposed to do this with humans during a glamour, for their own safety more than anything. It did something strange to humans, blocked out their ability to think properly, made them hyper-focused on one thing at a time. Necessary for a fairy bargain, but turned men ravenous when their mind shifted to...this. Despite the risk, Rey couldn’t abide by glamour laws when it was so easy to do what she wanted. When she was on her own, watching him for three days straight, swimming in her river and peeing behind her trees.

She raised her hips to meet his thrusts, growing slicker, and enjoying his panting in her ear, his hair tickling her face, the dull fullness sliding in and out of her, his hip bones pounding into her thighs. And then something changed and she closed her eyes like him, her whole body tensing, and he kissed her, still curving his hips harshly into hers, and she pulled on his shirt, wanting more, wanting it all, because he was in her forest and everything in it was hers.

“Ah!” she cried again, but this time from pleasure, arching her back and reeling.

Kylo smiled, pausing, his hot, gasping breath on her throat, kissing down her chest and pushing her dress up until he could suck her nipple, licking down to her navel, and lower. He gripped her thighs tight in his giant hands and kissed her between her legs--with that tongue again--teasing her with a series of hungry, wet circles, then slipped two fingers into her, using that hand to drag her closer to him eagerly, his arm muscles working as he rubbed her from the inside, raising himself up to kiss and lick his way north again.

Her thighs shook as his fingers moved faster, his dark stare on her, fully focused now, and that was intimidating, so she closed her eyes and let it take her, almost sitting up this time as it hit, then laying back in the grass, her hair a tangle of moss strands and white dandelion seeds.

For some reason she didn’t feel satisfied, staring up at the sky through the trees, catching her breath, then he pushed into her again, his hands on the ground to either side of her head, his face replacing the sky as he looked down at her with that same intense look, his lips swollen from exploring her body so hastily.

Kylo rubbed a thumb over her cheek, getting a closer look at her tattoo. Two arrows crossing. One symbolizing humans, the other Fae, constantly at war.

But Kylo didn’t know that as he closed his eyes and thrust home, his face looking almost pained as he spilled into her, deep and warm and honest. And she knew what she was missing.

She wanted the human to feel satisfied too.

Maybe it was the fairy bargain.