Fill 2 of 9 for collab prompt table
Thanks to sparklycitrus (Not enough Gareth Mallory love) and lei-bin (Judi Dench M and Ralph Fiennes M having a moment) for the complementary prompts!
(Also fulfills scavenger hunt item #81 - perform a tarot reading for Mallory)

Mallory has a moment to himself. Except he’s not really alone.

Mallory glanced up from his computer as Eve knocked on his doorframe and popped her head in.

“Don’t stay too late,” she chided cheerfully. “I’m off! See you tomorrow.”

He gave her a tired smile. “Enjoy your ‘hot date.’”

Eve grinned and did an exaggerated cha-cha-cha out, closing the door behind her.

He sighed at the paperwork he was reviewing, and leaned back in his chair, feeling the evening stretching before him endlessly. Perhaps if he just closed his eyes for a moment...to rest them...

His eyes flew open as he tensed at the very familiar and much mourned voice. “Olivia.”

“You’ve missed me,” she said with a wry smile. She was lounging in one of his guest chairs, wearing her favorite soft blue pullover and shuffling a colorful set of cards. She tilted her head at him. “I told you they’d put you here when I was gone.”

“It should have been a long time yet,” he replied roughly. “Preferably never.”

She flashed him that brilliant smile that changed her whole demeanor and his breath caught. “Ah Gareth, are you still carrying around that silly torch? We gave up that aspect of our relationship a very long time ago.”

“As always, I will remind you that that was your decision and I simply respected your wishes.”

She dimpled at him and he sighed and rubbed his eyes, half expecting her to disappear. When he opened them again, she was still there, holding out the deck of cards to him.

“Why are you here, Olivia? I don’t believe in ghosts and this seems very lucid for a dream.”

He leaned forward and took the cards, shuffling through them. “This is a tarot deck,” he said flatly. “Superstitious wiffle-waffle.”

“Ah ah, don’t be close-minded, Gareth. We’re not trying to predict the future, just give you a little insight into what’s troubling you.”

He set the cards down on the desk and held the bridge of his nose, letting his eyes close again. “Olivia...”

“Indulge me,” she ordered with her habitual tight smile. “Shuffle them and cut them into three piles, all face-down.”

He blew out a long breath, forcing his shoulders down, and did as she commanded, as he had always done.

“Right. The first pile,” she tapped it with a short and perfectly manicured nail, “is for your current situation. Perhaps a specific problem that you are facing, or simply the environment you find yourself in. Turn the top card over, please.”

He obeyed, staring at the picture thus revealed — a figure standing on a wall or perhaps a castle battlement between two upright staffs of wood.

Olivia snorted. “Hah. No surprises there. The two of wands stands for decisions to be made, multiple paths opening before you, and forward motion. But this card is reversed, which would indicate indecisiveness or perhaps a lack of planning.” She looked straight at him. “Or fear.”

He met her gaze. “As you say, no surprises there, especially given the current leadership and state of world affairs. The second stack?”

She nodded, the corner of her mouth tucked up. “The second pile indicates what might be causing the situation or what may be blocking progress. Turn the card, Gareth.”

He turned the top card over and stared at the skeletal rider on the pale horse. “Death.”

“Which is rarely meant to refer to a literally lethal event. Remember that we are dealing with symbolism, Gareth. Death generally indicates endings or upheaval, yes, but it carries the implication of new beginnings, as well. Reversed, as this is, it would connote resistance or fear of change.”

She smiled at him. “Human nature should hardly be surprising to us by now.”

He gave her a wry smile back and reached for the third pile of cards, turning over two by accident.

She snorted. “In a hurry? The third stack represents a possible solution, or at least a key. And your solution apparently requires two keys. The picture cards are customarily supposed to represent people, and you have, hmmm, the Knight of Pentacles and the Knight of Wands.”

Mallory stared at the two cards, one showing an armored figure holding a pentacle and sitting on a calm dark horse, while the other knight flaunted a wooden staff and rode a rearing steed of a fiery chestnut color.

“Pentacles often stand for knowledge,” she said thoughtfully. “The knight of pentacles would be an intelligent and responsible person, one who is patient, hard-working, and persistent. Quite different from the knight of wands. That one is a risk-taker, someone who is adventurous, confident, charming.” She smirked. “Sexually adventurous as well.”

He transferred his stare to her as she leaned back and stretched, settling in a lazily cat-like ease he’d rarely seen in her while she was living. “Why are you here tonight, Olivia?”

She met his stare, her gaze bright and warm. “Because you needed an old friend, an ex-lover, an ex-mentor to sit with you and help you make a hard decision.”

He closed his eyes against a fresh stab of mourning. “It’s not my first choice to send Q and Bond into such danger.”

“No,” she said softly, her voice fading. “But it is your best choice.” 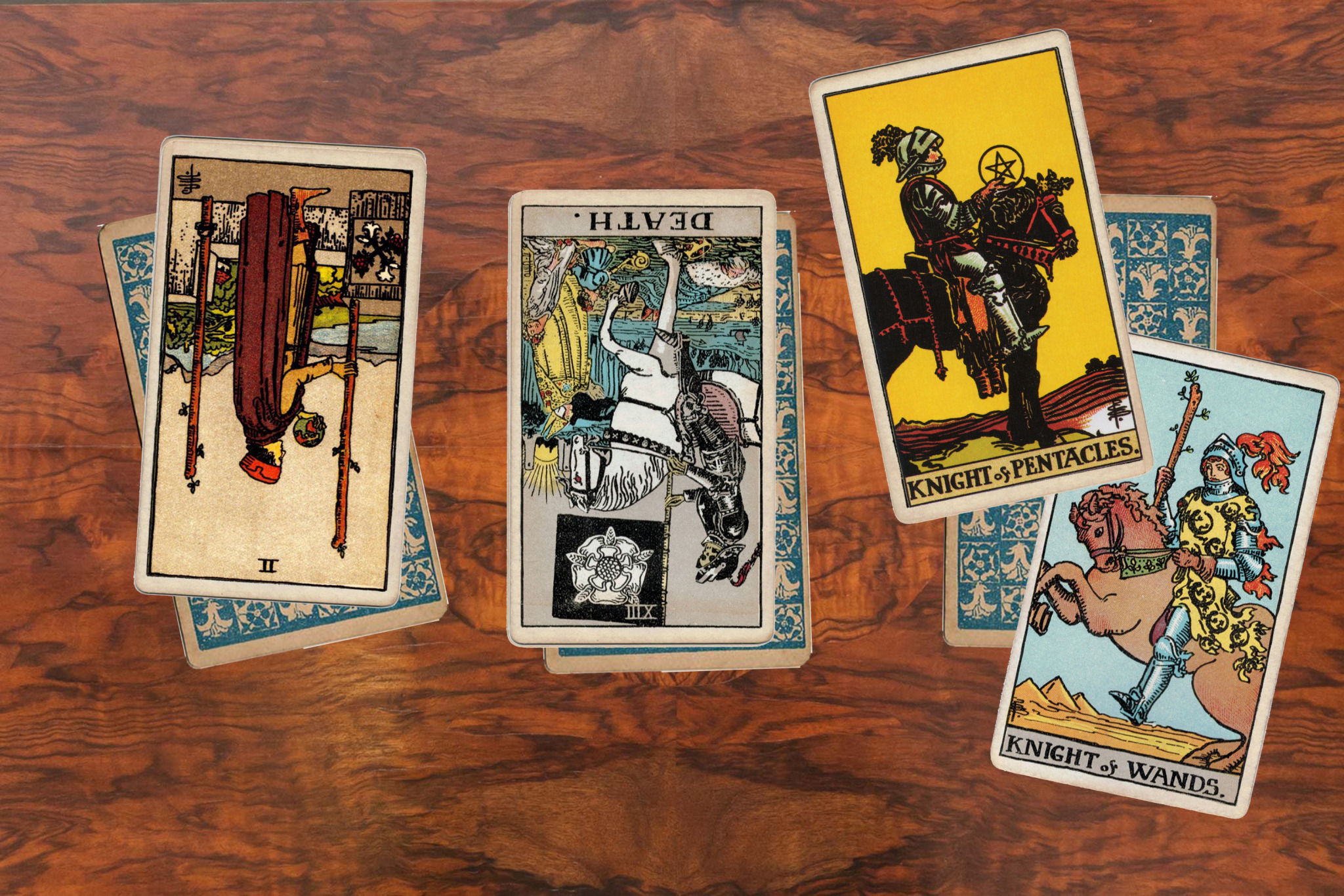