In which Steve plans his and Tony's 10th anniversary 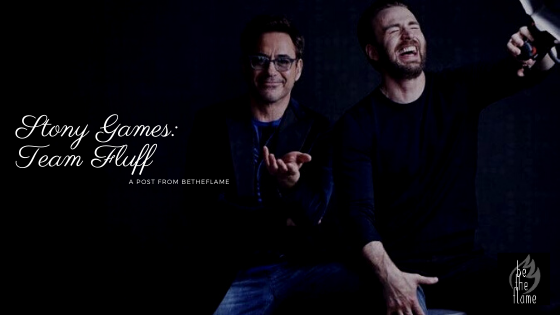 Sam smiled at Steve. “You know my pal Colicchio?”

“The chef guy, right? The one on the show? Bald head, looks real disappointed whenever someone doesn’t cook risotto correctly?”

Sam snorted as he guided the quinjet in for landing on top of the tower. “He’d be delighted to know that’s his legacy, but yeah. I can get you a table at one of his spots, why don’t you just do that?”

Steve shifted in his seat, thinking through his options.

“Listen, Steve, if you want something quintessentially New York for your anniversary, you have a few options and most of them involve either food or yelling at tourists in Times Square.” Sam grinned over at him. “Personally, I’d pick food.”

Tony and Steve had thrown a giant wedding party in Central Park on the first day that same-sex marriage was legal in the entire United States and had basically told anyone who wanted to get married to come along and they’d provide the officiants. It was international news and the photos of all the Avengers - newly minted licensed wedding officiants each and every one - still circulated on the internet. Steve’s personal favorite was one of Bucky and two women who also had prosthetics - all three had painted them in rainbow colors and Bucky was crying as he pronounced them married.

Their actual anniversary, however, was much earlier. About a year after Tony fell out of the wormhole and Steve realized that if he didn’t have Tony in his life every day, the future would be worthless, they gathered everyone they loved at Tony’s family house on Martha’s Vineyard and made a covenant to love each other for as long as they both lived. Steve had said in his vows that Tony gave him a home, and Tony had responded that Steve was his home and Pepper had broken her usual composure completely and sobbed.

Things had been dicey for a bit - Bucky’s resurrection was a detour for sure - but they were heading into year ten on solid ground and Steve had never felt more sure of him, his husband, or his life in general.

“I want to do the New York thing because it’s where we met,” Steve replied.

“Right, but short of us blowing up Grand Central, let’s not bring too many other elements, Cap,” Clint said from behind them.

Sam landed the jet at that point and they all exited the plane. Steve told them all they had thirty minutes before he expected them in the team room for a debrief, which got him the obligatory eye rolls from Clint and Sam and a complete lack of reaction from Natasha. Just before he and Sam parted ways to head to the showers to wash the gunk of the battle with the alien goo monster off of them, he called for the man’s attention. “He’s got a few joints, right?”

“Give me the one closest to the Financial District,” Steve said. “I want to go to Dead Rabbit first.”

“- I like all your suits, whatever material they’re made out of -”

“ - and the shoes with the lifts, so I’m assuming we’re possibly getting photographed -”

“We’re in Manhattan, Tony, and we’re us. It’s a distinct possibility.”

“ - which also tells me whatever we’re doing isn’t VIP or private so I’m thinking we’re having a Steve-fancy date and not a Tony-fancy date,” Tony concluded with a grin.

“In the ten years we’ve been married,” Steve responded, “we’ve celebrated our anniversary everywhere but New York. Since this one was my turn to plan, I decided we should do things that can only happen in New York.”

“No, wait.” Tony clapped his hands together in glee. “We’re going to a sports bar in Queens to hear people rail about the Mets?”

“Do you want to know what we’re actually doing?”

“Nah, would rather keep guessing.” Tony tapped his finger to his chin in thought. “Oh, I got it, we’re going to get trapped in a giant group of tourists in Times Square who all think Carmine’s is authentic Italian food.”

“I remember your feelings. Your problems with Carmine’s should probably be discussed with a therapist,” Steve replied.

“You cannot mass produce authentic Italian food, you just can’t,” Tony said stubbornly. “Authentic Italian has to be made by someone who will smack you across the face if you try to tell them that lasagna should have bechamel.”

Steve chuckled. “I think the rant you subjected Gordon Ramsey to is still circulating on Reddit.”

“Well, we’re not going to Carmine’s,” Steve said. He laced their fingers together as Happy cut across a few lanes of traffic to turn onto FDR Drive.

“Since we’re heading south, I would hope not,” Tony said.

“We’re going to start at an Irish pub,” Steve said.

Tony looked out the window quickly and then back to Steve with a sparkle. “You’re taking us to Dead Rabbit.”

“I’m taking us to Dead Rabbit,” Steve confirmed, which earned him a kiss. The Dead Rabbit Grocery and Grog was hands down their favorite bar in Manhattan. Started by two lads from Belfast who were world renown cocktail makers, it was three stories of excellent liquor, delicious food, and an atmosphere that always made them feel like they were humans and not superheroes. Tony was known to close the doors of a room behind him and pay for an open bar for that room for two hours, as long as everyone would hand over their cell phones to Happy.

“Then where are we going?”

“Sam called a pal of his and asked for a table at one of his places.”

“Sam knows everyone in this city who makes good food,” Tony said. “It’s like his personal mission so that does not narrow anything down.”

“Then you get to guess until we leave Dead Rabbit,” Steve replied.

“Is it Gramercy Tavern?”

“I’m not telling you,” Steve reiterated.

“Crying out loud, Tony, I’m not telling you.”

“I think I’m leaving you for that duck,” Tony said as they lay in bed later that night.

“I had no idea you liked rhubarbs that much,” Tony replied.

“Bucky’s ma made strawberry rhubarb pie whenever she could con someone into driving out of the city for the berries,” Steve replied. “It just tastes like home.”

They were quiet for a few moments before Steve spoke again. “I really loved the moment you offered Tom ten million dollars to come live with us and cook the duck every day.”

“That was a low ball offer,” Tony nodded. “Roasted duck with a black cherry reduction sauce that I could bathe in is not to be taken lightly.”

“Of course not, baby,” Steve said.

“In terms of a New York date,” Tony said, “I think we ticked a lot of boxes. Selfies with tourists, you getting into a fight-”

“It was a discussion-”

“- about the Mets season, a gorgeous dinner, and then a walk through the streets where everything smelled like hot garbage and stale urine.”

“Happy anniversary, baby,” Steve murmured as he pulled Tony in for a kiss.

“Happy anniversary to you, too.”

Full disclosure - Dead Rabbit and Craft are two of my and Mr. Flame's favorite places in New York and this was basically our 5th Anniversary date. Except I got into with someone over Liverpool vs Man U. Oops. And I would absolutely leave Mr. Flame for that duck and he knows it.

Find me on Twitter or Tumblr for more on these yahoos. You can also submit prompts and cajole me into writing faster - it usually works. If you're on Discord, I'm definitely there, too, and probably hanging in the Put on the Suit Stony Server or the PotsCast Podcast server . Oh! And FestiveFerret and I have a fandom podcast if you're so inclined.