The Haunting of the Midoriya's

Izuku runs home in a thunderstorm and feels like he's being watched. He returns to his apartment to find himself haunted by something straight out of a horror movie! Who is this ghost, and more importantly, what does it want with him?

A little crossover idea I had between My Hero Academia and Erma.

Izuku ran home through the rain. It was cold, he was soaked, he had no raincoat, and he’d LEFT HIS ALL MIGHT TOY AT THE PARK! He stopped and looked behind him.

Izuku played with his All Might toy. He brought All Might done for a Miami Smash against the dreaded Pinecone villain. Then All Might blocked an attack from the evil stick and hit him with a California Smash. Then he threw both of them together and hit them with a DETROIT…SMASH!. A drop of water fell on Izuku’s head. Izuku looked up. A few more drops fell and hit his nose. He should get going soon. It looks like it was about to rain. Now that he looked it would probably be dark soon too. Just before he got up to leave he heard the voices.

Izuku looked up to see what Kacchan wanted with him now. He saw Kacchan and his gang, but they weren’t walking toward him.

“Yeah you! I haven’t seen you hear before! Who are you?!”

A tree blocked Izuku from seeing who they were walking to. But who it was didn’t really matter anyway. Izuku got up.

“What! Not saying anything? You think you’re too good to talk to m-“

Kacchan turned to glare at him. “YOU GOT SOMETHING TO SAY DEKU?” The rest of his lackeys looked at Izuku and began snickering.

Some of Kacchan’s lackeys walked over to Izuku, who refused to budge despite his whole body trembling. Kacchan followed behind them. “Looks like you need another lesson Deku.”

Just as the lackeys began to grab Izuku, the rain began truly pouring. At the same time the temperature suddenly dropped so the other kids were shivering as much as Izuku. They all ran home, Izuku following.

He was almost home. Should he go back and get his toy? Should he just go home and get it later? On the one hand it would probably be there tomorrow for him but what if a squirrel or another kid took it or if the storm damaged it? On the other he was almost home and it would be raining soon and did he really want to be out in the rain and it was his favorite toy and no kid would really be out to take it and he could get up early to rescue his toy but on the other other hand-

A crack of thunder gave him his answer. He sprinted to his apartment building. Just as he got under cover he stopped. He turned and looked around, suddenly feeling like he was being watched. He saw nothing but empty streets, lit streetlamps, and trees rustling in the wind.

He climbed up the stairs, the feeling still in the back of his mind. He entered his apartment. No sign of Mom, she must still be meeting that family that just moved over from America. Izuku went to the window to look outside. Down in the streets a sole figure stood right below one of the streetlights. They were too far away for Izuku to make out any details. Izuku stared for almost a minute. The figure did not move, despite standing out in the open in the middle of a rainstorm. Unnerved Izuku closed the curtains, dried off and began watching TV.

The lights went out. Izuku looked up just as they came back on. Could the storm be that bad? They flickered again. And again. And again. They kept flickering faster and faster, with less and less time between each flicker. Izuku frantically looked around the room. What was happening? Thunder clapped. There was a fierce knocking at the door. Izuku jumped and hid behind the chair. The knocking went on for several seconds before finally, it stopped.

Izuku listened. He heard nothing except the buzzing of the lights going on and off, the pitter patter of the rain outside, and the static from…the…TV. Izuku slowly turned back toward the television. Static flashed across the screen like a snowstorm. He’d seen older TVs do that. But his TV never did, so why was it doing it now? The temperature of the room dropped. Izuku crossed his arms and began rubbing them. He could see his breath What was happening?

Was it a villain attack? Why would villains be attacking his home besides how would a villain make lights flicker, create static on the TV and make the temperature drop unless it was multiple villains butwhygotoallthistroubleandhehadn’theardofanythinglikethishappeningbeforebesidestheydidn’thavemuchmoneyand-

Out of the TV came a white. Soaking. Hand. After it came the arm. And after the arm came a mess of black hair, covering its face like a shroud. And after the hair and head came the rest of the ghost crawling out of the TV, dressed in a plain white dress. It looked up and despite its eyes being hidden Izuku could tell it was looking right. At. Him.

Izuku was not a fan of horror movies. He didn’t watch them. But he had seen parts of some on TV. And he’d seen one just like this. It did not end well for the person in front of the ghost. His usually endless stream of thoughts could only form one word: run. He scrambled out of the chair and began sprinting across the room.

The ghost flew over his head and stuck itself to the wall. Izuku skidded to a stop and began to run down the hall. As he turned he saw the thing begin to scurry across the wall like a spider. He sprinted down the hall past his Mom’s door, past the bathroom, toward the front door, all the while hearing that thing’s skittering behind him. The thing flew over his head again and landed on the front door before turning its head toward him. Izuku stopped himself by grabbing his own doorway and swinging himself into the wall. He flung the door open, threw himself inside, slammed the door shut and began backing away, his heart pounding. He began listening.

He looked down. He didn’t see any shadow behind the door. He couldn’t hear the scrabbling of the ghost on the wall. Where was it? Had it gone away? Was it fine with just scaring him? Was it waiting for him to come out? Or was it messing with him, trying to make him scared. He happened to glance to the side and saw the wall stretching inward, like it was a spandex sheet someone was pressing against. He bunched his legs to run. The wall snapped back as the ghost floated through it, hands outstretched. Izuku ran out his door again down the hall. He stopped at the kitchen.

The lights started flickering again. He looked around, trying to see where the ghost would appear next. He looked to the left, to the right. He heard breath behind him. He leapt forward and whirled around. The ghost was there, form flickering with the lights, its hand stretched right where he’d been standing. Izuku backed away and pulled a stool in front of the ghost. With a flick of the ghost’s head the stool moved to the side. With what he was sure would be one of his last thoughts Izuku wished he had telekinesis too. The ghost floated closer, and closer. Izuku pressed his back to the wall. He squeezed his eyes shut.

A little hand tapped his arm. Izuku opened one of his eyes. The ghost was holding out its arm. Izuku looked at its hand. An All Might figure? He stared at the veil of hair covering the ghost’s face, and at the toy, and at the ghost’s hair again. The ghost tilted its head and moved closer to him. Its bangs parted slightly, revealing half of its, of her face. Aside from the white skin, the eyes with the black whites and white pupils, it was a completely normal face of a girl his age with a confused expression.

Izuku picked up the toy from her hand. He looked back at the girl. She was smiling now, happy he’d taken the toy. He turned the toy over to see in marker Izuku written on its boot. His All Might figure from the park. But how had she known about it? He’d just forgotten it today when he ran home from the rain just after Kacchan-

“You were the one Kacchan was starting to pick on.”

She looked at him like Izuku had just asked if All Might had lost a brawl with an insect and shook her head.

“That’s good. Did you come here just to return this to me?”

“Did you have to make it that scary?” Izuku grumbled.

The girl looked upward in thought, like not coming in like a horrific spectre here to rip Izuku’s face off was a completely new idea. She shrugged. Izuku sighed before remembering something.

“Oh! You’re soaking wet! Aren’t you cold?” She glanced at the water dripping from her like she’d only just remembered it and shook her head.

The girl opened her mouth just as the front door opened. Izuku heard his mom’s footsteps alongside someone else’s. “Thank you for showing me around Mrs. Midoriya.”

“Oh its nothing Emiko. I hope you and your husband really enjoy living here.”

Next to Izuku the girl looked terrified. Izuku turned to reassure her that his mom wouldn’t be mad at her.

Izuku looked at the woman standing next to his mom, she was tall, had black hair, wore a white dress, and her bangs completely covered her face. Erma’s mother. She crossed her arms and gave her daughter the “mom look” (Apparently having your face completely covered in no way weakened the “mom look’s” scariness). “Care to explain what you’re doing here?”

Erma found the nearby wall very fascinating to look at while Izuku stepped in to give the most succinct, dignified, panicked rambling that he could.

“W-wait it’s my fault really! I mean I left my toy at the park while she was there and she came back at gave it tomebecauseshe’sactuallyreallyniceandshehasn’tdoneanythingwrongatall!

“Well I’m proud of you for bringing his toy back. It was a very good thing to do.”

Erma smiled and breathed a sigh of relief.

“Unfortunately, it doesn’t explain why you were at the park instead of waiting at home like I asked.”

Erma stepped forward, cleared her throat, raised up her hand, and dolphin dove for the TV. She only made it halfway before her mother’s hair shot out like a tentacle, grabbed her, and deposited the very annoyed looking Erma under her mother’s arm.

“That’s what I thought. Now let’s get going. Remember to say goodbye to your new friend.”

Erma smiled and waved at Izuku as her mother carried her out.

Erma’s mom took out an umbrella and turned back toward Izuku’s mom. “Bye Inko! We should have our children meet again soon!”

“That sounds wonderful! Goodbye, and have a nice walk home!”

And with that the two left.

Mom turned to Izuku. “I’m so glad you got to meet a new friend Izuku. They just moved into this neighborhood and I’m sure you’re going to make them feel so welcome. How was Erma? Emiko said that she was an adorable little sweetheart.”

He walked back to his room and took out his current “Hero Analysis for the Future” notebook and began an entry on Erma. He finally had a new friend! And she was pretty cool… 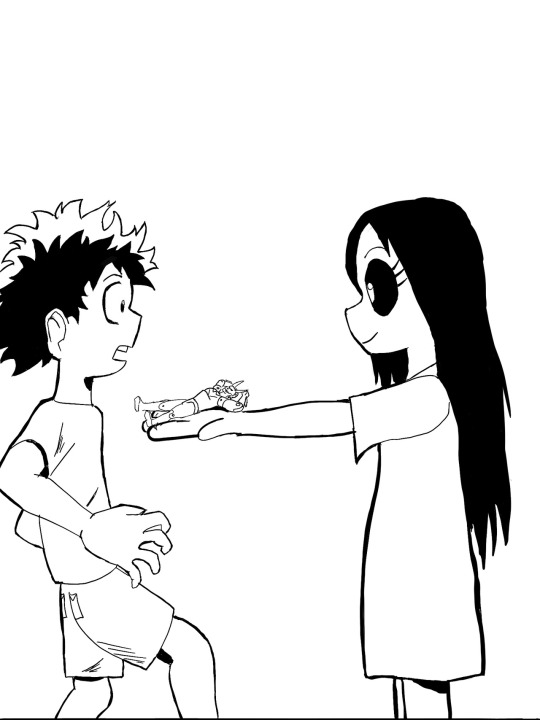 Hope you enjoyed! This took a lot of inspiration from the animated short where Erma met her teacher: https://www.youtube.com/watch?v=u6QpFgxwzQE