Not Alone After All

Claire is widowed after a tense 20 year marriage, and with her newfound freedom she decides to start over in the small tourist town of Boone, North Carolina. Little does she know her bright future will bring her face to face with the ghosts of her past and force her to confront what two decades of deception and isolation have grown in her heart. 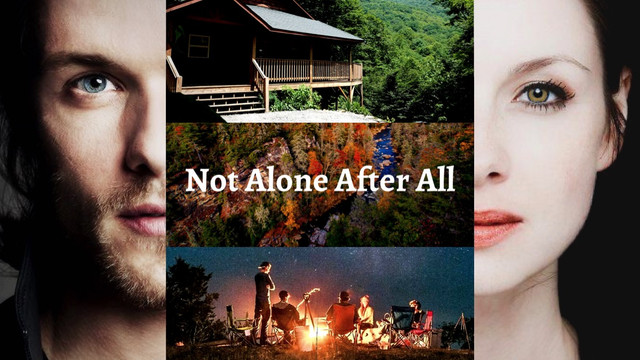 “We did everything we could, but his injuries were too extensive. I’m sorry, Mrs. Randall. But your husband has died.”

The emotion bent me in half, and I staggered to my knees under the weight of it. The young doctor held my shoulders as I sobbed, seeing and hearing everything through a buzzing fog in my head. He helped me to a chair and sat with me until the first wave passed. He asked if there was anyone he could call.

The irony that on the outside my reaction looked like grief kept striking me over and over. It wasn’t sorrow or loss that overcame me in that moment, but relief.

I tried to calm my breathing and fresh tears filled my eyes. He had asked if I wanted to see Frank’s body, and I hesitated, but then shook my head. No, I couldn’t stand next to his corpse and pretend to mourn him. Even I couldn’t stoop that low. After a few awkward moments and a sympathetic pat he left me in the waiting room with instructions that someone would get me for the next steps.

I should call Candy... or Sandy, whoever the latest one was. She would probably want to see him.

That snapped me out of it. Our daughter needed to know what happened, she needed to be here with me at the hospital, and she needed me to act like a normal wife, grieving her husband as would happen in a normal marriage.

It wasn’t her fault that our marriage hadn’t been normal.

And now it was over.

I ignored the surge of hysterical relief in my chest and pulled out my cell phone to dial her number. My thumb hesitated over the call button and I closed my eyes to steady myself. I had years of experience breaking terrible news to families who lost loved ones, I just needed to summon that part of my training to tell Bree that her father was gone.

“Hey, Mama!” Her cheery voice came over the line. “I’ll be home in 20. I’m just finishing up at the library and I ran into…”

“Bree,” I interrupted her happy chatter, injecting urgency into my tone. “You need to come to the hospital, baby. It’s your father.”

I hesitated, and that split second was enough.

By the time Joe had picked up Bree and got to the hospital I had my mask firmly in place. She walked through the sliding doors with wild eyes, tears flowing, and I caught her in a hard embrace.

Her bright hair was braided down her back and hidden under a cap, but little tendrils of that deep copper danced in front of my face. Bree was a tall girl, nearly six feet. She commanded attention wherever she went, and tonight was no exception. I could feel the collective gaze of the hospital lobby on us.

Joe Abernathy’s presence calmed me instantly. He had been a close friend since our med school days, and he was the only person I trusted, the only person I’d call in times of trouble. He was the only person who looked at me straight in the eyes and acknowledged the conflict there. When I called him tonight to ask him to pick up Bree and bring her to the hospital there wasn’t a question of whether or not he would help.

“You can go in and say goodbye, if you’d like.” My arm was tight around my daughter’s waist, but I deliberately excluded myself from the invitation. Joe caught it and nodded, taking Bree’s arm and leading her down the hall that bustled with activity, doctors and nurses walking quickly from place to place.

I stood awkwardly alone, feeling empty and purposeless. Then I slowly walked over to sit in a chair positioned for privacy behind a fake plant. That’s what normal wives did when they were grieving, I thought. They sat and stared off into space. I’m sure a normal wife would be overcome with shock and pain, thinking of the past, but my mind was consumed with the future and spinning with all the possibilities that Frank’s death opened up.

Even as I chastised myself for doing it, I couldn’t help but let myself imagine what his absence meant for me. I could leave Boston. I would probably be getting quite a sum from Frank’s life insurance which would help me move somewhere nice and quiet. If I sold the house as well…

I knew Bree would be in college this fall, so that would factor in. But suddenly my whole being ached to be rid of that cold stone townhouse with its old fashioned Victorian elegance.

A cottage with a garden. Maybe not by the sea, that might be out of my price range. But in the country, or maybe the mountains. Somewhere warm, where I could sit in the sunshine without neighbors ten feet away. Where I could dig in the dirt and not have someone berating me for working so hard to grow vegetables and herbs that were readily available at the store.

I took a deep shaky breath. I had to slow down. None of this could happen until an appropriate amount of time had passed. I wouldn’t hurt Bree by rushing to change her whole world overnight.

But I could see it. Thank god , I could see it so clearly in my mind and the fact that it was possible brought fresh tears to my eyes.

Late that night I lay in bed with Bree asleep beside me, but I couldn’t relax. The room smelled like Frank. Like that overpowering cologne he used that all the college girls went wild for. I wanted to open the windows and air that smell right out of my life, and I made a mental note to wash all of the bedding in the morning.

I sighed and studied the ceiling fan spinning above the bed. I really should let Candy know about Frank. I wouldn’t want to hear something like that through the grapevine about my lover, and if I waited until morning it might be announced in class or something else that would be a shock for someone who cared about him.

Leaving my daughter peacefully snoring with tear tracks down her cheeks, I tiptoed down the hall and the grand wooden staircase. My mind, which had been held so firmly in control for so long, rebelled on me now that I had given it some rein.

Pretentious. Fucking snobbish, that’s what this place is.

This house screamed Frank Randall and his family legacy. It had never been my taste, and it was never my decision how things were in this house. Whichever ancestor built it in the 19th century had left their mark with the name “Randall” carved into the stone above the front door and the damned family crest on every piece of millwork inside.

Almost like they jizzed all over the house deliberately, to ruin it for anybody else.

I had laid the plastic bag of Frank’s personal effects on the entryway table, and I picked it up now and carried it to the dark kitchen. I sat at the ornate marble island and pulled out his phone, wallet, wedding ring, and a handful of change and business cards. His clothes had been ruined. I examined the evidence of my husband’s last day of life with a jaded eye.

His phone powered up right away and opened without a password. He hadn’t needed one. There was nothing to hide from me.

He had 37 missed messages and a dozen missed calls. 28 from Sandy who appeared to be having a panic attack that he was ignoring her, 3 from Brianna asking if he would help her with a history project that weekend, and 6 from someone named Michelle who he had stood up for a date that night.

Michelle can find out in class tomorrow.

Probably a cold-hearted thought, but I didn’t care much. I copied down Sandy’s number and typed it into my own phone. The thought of texting from his phone crossed my mind, but I dismissed it. Too morbid.

This is Claire Randall

Frank was killed in a car accident tonight.

Thought you should know.

I paused, considered, then added,

Sorry for your loss.

Then I blocked her number so I wouldn’t see it if she replied. I powered off Frank’s phone and laid it back in the plastic bag, shoving in the rest of his belongings and zipping it closed. Bree might want to look through that later.

I sat there in the dark wondering if I should delete his texts in case she looked into his phone, but decided against it. His affairs were his business. If his daughter thought less of him it wasn’t something I cared to contain or control.

The house was cold and unwelcoming around me, almost like it knew I planned to auction it to the highest bidder. And I sat in the dark letting my disdain and hatred for the place flood through me. Fuck this house. Fuck the years I spent here feeling trapped and longing for an escape. I couldn’t wait to leave it behind me, even if I had to bash in every stone myself. Randall legacy be fucking damned.

I wondered how long until I could change my last name without causing a ruckus? It would probably be tasteful to wait till Bree married, I wasn’t sure. But I would separate myself from him—slowly perhaps, but surely—until I was my own person again with nothing of him to hold me down.

There wasn’t anything of Frank Randall’s that I cared about enough to keep except his daughter.