Method in Her Madness

Natalie has a new theory of Nick's condition, and she needs his help to treat it.
"Well, it turns out you were right all along." Natalie took a deep breath. "You're dead."
(Original: January 2011.  Modified: March 2011.) 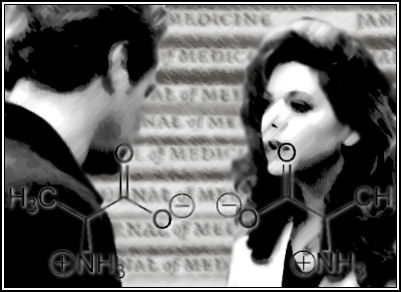 "I managed to snag some more time on the tunneling electron microscope at the institute," Natalie said, checking the hallway for stragglers from the shift change. She pulled the morgue door shut behind her and crossed to her desk, where Nick leaned against her file cabinets. Natalie plunged her hands into the pockets of her white lab coat and looked up at her favorite — only — vampire patient. "I have good news and bad news. Which do you want first?"

"The bad," Nick grinned. "I can take it." He was wearing his leather jacket with the bullet holes in it again; Natalie's observations remained inconclusive on whether that meant he was feeling more human, or less — or just aware of the weather.

"Well, it turns out you were right all along." Natalie took a deep breath. "You're dead."

Natalie waited for a question. None came. She sighed. Understanding why Nick kept himself so contained did not keep it from frustrating her. She was determined to break through this time. "Or, speaking much more precisely, chirality — the 'handedness' of molecules — reveals that you're inanimate on the atomic level. All living things have left-handed proteins. You, Nick, are made of right-handed proteins. If we thought the scientific world would go bonkers for you before, well, hah!" She pulled a diagram of the optical isomers of an ordinary amino acid from a folder on her desk and handed it to him. "For example, this here is what you've got, and its mirror image over here is what I've got. It's been known since Pasteur that chirality is the difference between biochemistry and chemistry, between organic and inorganic matter, but it just never occurred to me to look for it in your condition."

"I've heard of chirality before," Nick said. His expression took on the distant, absent cast that often preceded a reminiscence. "The thalidomide tragedy in the '50s, right?"

"That's right." Reminded that Nick had lived through more history than she could ever learn, Natalie shivered; she had been born the year after that notorious drug had finally been outlawed in Canada. "Thalidomide was synthesized with both left- and right-handed isomers. One is effective against morning sickness, but the 'wrong-handed' one is teratogenic. They didn't understand that at the time."

Nick handed the paper back to her with a sad smile. "You promised good news, too."

"Right!" Natalie took a deep breath; so much rode on his reaction. She plunged ahead. "We should consider treating you with a rhodium catalyst to reverse the chirality of your molecules."

"And that will make me human again?"

"It should make you chemically animate again. Beyond that, I just don't know. We could be looking at a change perceptible only on the molecular level, or a life-long therapy — or a genuine cure."

Natalie closed her eyes briefly. There it was. She dropped into her desk chair and looked up at Nick in rueful wonder. "You'd really let me do it, wouldn't you, even after the Lydovuterine? No questions asked?"

"Oh, Nick." Natalie put her elbow on her desk and rested her head on her hand. "Where to start? Rhodium is the rarest and most expensive precious metal on earth, not something from the supply cabinet down the hall. And yeah, it's inert as an element, but it's toxic in compounds. Most importantly, while rhodium is regularly used to synthesize molecules with a desired chirality, it makes no sense whatsoever that I could just, you know, shoot you up with rhodium and change the shape of your existing, functioning molecules!"

Nick's expression hardened. "You were pulling my leg?"

"No!" Natalie dropped her hand and raised her head. "Your chirality really is backward, and I deserve the Nobel Prize for figuring that out. But Nick, you can't just bow to my authority. If I told you to jump off a bridge— no, bad example, you can fly. But working under this level of secrecy, I have no peer to review my ideas, and you have no one to go to for a second opinion. We can't — either of us — go on this way!"

The sudden silence rang in Natalie's ears. She looked down at her shoes, and then up at the clock above the hallway door. It meant the world to Natalie that Nick trusted her, but blind faith had no place in the scientific method.

Gently, Nick's hand covered hers. "What do you propose?"

"You're a smart man." She squeezed his hand, stood up and met his eyes. "You're a detective; you've been a professor and a doctor. I need you to bring that to your own health, to be the peer review and second opinion. Challenge me! I'm not asking you to become a biochemist, Nick; I'm asking you to recognize a bridge when you see it, and not to jump without a net — not even if I say, not even though you can fly."

"Fair enough." Nick's smile reached his eyes. "Hey, did I ever tell you that my father employed an alchemist when I was a boy?"

"Well, welcome to the mad science club." Natalie dropped his hand and picked up a folder of photocopied journal articles and textbook chapters. The corners of her lips twitched. "Here's your first homework assignment."

Disclaimers. Parriot and Cohen created Forever Knight; Sony owns it. I intend no infringement. Naturally, all characters and situations are fictional. (Vampires don't exist. Molecular chirality does, though.)

Citations.  Canon: This story diverges from canon after "The Fix" and before "Last Knight."  Science: I encountered a brief history of the science of chirality in The Disappearing Spoon: And Other True Tales of Madness, Love, and the History of the World from the Periodic Table of the Elements by Sam Kean. From there, I hit Wikipedia.

Inspiration & Beta-Reading: I wrote this mini-story for Odditycollector in the 2010/2011 Fandom Stocking game; she observed that Natalie is "a mad scientist at heart." My thanks to Natmerc for checking the story!

Thank you for reading! Constructive criticism is welcome. Let me know what you think?