The DSS Hootsforce is traveling the galaxy, fighting for the light. But in the back of his mind, the heroic Prince of Fife is faced with a shadow of evil intent and soon thrust into a fight against a merciless foe on a battlefield of darkness. A battle with rules unbeknownst to him. Can the wizard at his side help him win this fight, or will he be the reason for his downfall?

So.
While I kept the canon events for this, this is a backdrop for the Universe: Law of Fire Comic, set after the end of the Terror Vortex conclusion. The idea is that this is what happens somewhere in the background over the course of the planned comics and explains how it's a thing in the first place (you know, with Angus being all crispy).

While the comic and most art are more light hearted and fun, this one hits comparatively emotional and angsty notes. Things will turn very grim for a while, including some serious mental health issues being brought up. For anyone struggling with this, stay safe and please take the tags seriously, because I mean them, this will be dark.
M rating because it also contains mild gore at certain points. But it will end with a well deserved happy end.

The first four chapters are rather short for effect purposes, average chapter length will hover around 2.5k after that.

Beta and polish has been done by the one and only, the wonderful LigeiaMaloy! 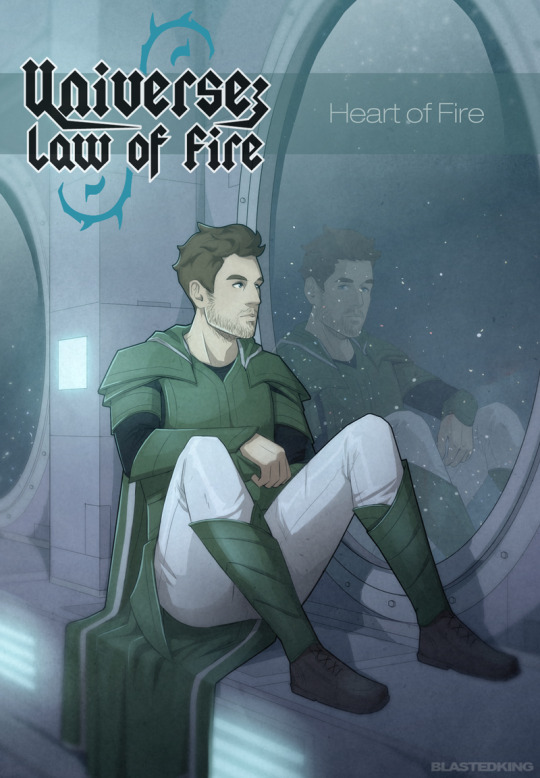 "And lo, Zargothrax was finally defeated.

But in the epic final struggle with the dark sorcerer, the valiant hero Angus McFife realised he had been impaled by the Knife of Evil.

As he watched the lifeless corpse of Zargothrax dissolve into liquid dust, Angus knew that soon he himself would be corrupted by the dark power of that cursed blade.

And so he resolved that he must make the final sacrifice for the Glory of Dundee, he would end his own life by descending into the raging volcanic fires of Schiehallion!"

Unbearable heat pressed onto his body. Fingers of molten stardust grasped at his limbs, pulling him down, down into the abyss, where raging flames embraced and impalled him.

He felt the fire and yet he was freezing cold.

He shivered, ripped from the nightmare by the mercy of his brain, his breath flat and staggered. His fingers trembled as he wiped the ice cold sweat from his face.

Casting the thin blanket aside, Angus sat up and pressed his bare feet against the smooth metal floor. It was warm against his cold skin. Through it, he felt the low pulse of the submarine and for a moment he kept his eyes closed, taking a few deep breaths, trying to calm his still shaken mind.

This nightmare wasn’t new to him. On the contrary, since the beginning it had felt strangely familiar. Although he couldn't even remember when it happened the first time. Horrible, unpleasant and allconsuming nightmares - and there was something deeply unsettling about them he couldn't quite put his finger on. More unsettling than the concept of death.

He slipped into clean, light clothing that would keep his honour intact while walking the ship and left his cabin. There was nothing royal about it, the room was as functional as everything on the DSS Hootsforce and not much beyond that. It didn’t bother him much. He liked this ship because it was a great ship, a powerful force of the light. Nimble and quick - royal standards be damned, this was a good ship to be on.

And he was here with the people he trusted the most. Powerful allies and the best of friends.

He took the ladders to the command deck. To this day he still struggled to orientate the submarine interior with its hull. The large, round windows were in truth convincing screens, displaying the outside from viewpoints that sometimes didn't quite aligned with the sub’s actual orientation.

Fortunately, there was little risk of getting lost between the quarters and the command deck while under trust. He simply had to go up to the very top of the conning tower. Or front, from whatever angle one was looking at it.

He met no one on his way. He hadn’t expected to. The Hootsforce operated under a simulated day night cycle - even though most of her crew didn’t seem to have much use for it - and the according work shifts. With the graveyard shift came empty corridors and the cold blinking lights of deserted stations on autopilot.

Angus wasn’t surprised to find Ralathor on the command deck, sitting in front of one of the front monitor panels.

Why he wasn’t surprised, or how he could possibly have known that he would find the man here wasn't important, Angus was glad about it either way.

“Did you fall asleep?” Angus asked, his voice carrying a cheerful pitch that betrayed the turmoil his nightmares had left.

“I did not.” Ralathor wasn’t startled. He didn’t turn to face Angus who walked up to him and sat down in the seat next to the commander. He only briefly looked at the bright screen. Whatever Ralathor had been looking at was, to Angus, nothing but important sounding wizardry.

“You look like you did, though. What woke you up?”

Angus blinked, only really looking now at Ralathor, and he somehow couldn’t shake the feeling that Ralathor had expected him. But really, would that surprise him?

“Just dreams.” He waved the idea away with one hand, partly to convince himself that it really was nothing at all. It did not help. Neither did the silence that followed. Ralathor looked away from him, so he turned his attention back at the screen.

Ralathor had never been one of many words, and it had never bothered Angus before. He was quite comfortable to fill a conversation for two if he had too but this time, he didn’t know what to do with this silence. When it stretched to the point of discomfort he finally said: “It’s the same dream, actually. For a while now.”

Never so much did he long for the bait to be taken, to be asked, to be noticed . For a reaction that’s more than a simple acknowledgement of his words. “It’s an inferno. Flames everywhere, tearing me apart. I can feel it on my skin, but inside of me, too. Quite horrible actually. A little bit like that poison Hootsman brought with him the other day, heh.” He laughed, but it was a weak sound, his eyes searching for Ralathor’s. But his eyes only reflected the bright screen. He wasn’t laughing.

“Ah, you know what, it’s silly, I know. Just dreams right?” Angus' hands were restless, as was his tone. He tried to lean back but was leaning forward almost immediately again, uncertain if he should stand up and leave or not.

“Angus. Do you know where we’re going?”

“Sure,” he answered without missing a beat, he didn’t have to think about it. Of course he knew. They were on an important mission after all. For a moment a light frown drew his brows down while he tried to remember what that mission exactly was. He was sure there had been a briefing. God, he should have paid more attention.

Ralathor finally looked at him, and Angus was startled by what he saw in his eyes that looked so much darker today in his exhausted face. Not a single emotion betrayed the pale features, and yet it was as if a deep, endless ocean opened up behind those eyes. Something that didn’t seem human and yet made Angus feel deep sorrow.

There was something, maybe it was the hint of a smile as the commander answered, but if it was, it was the most somber smile Angus had ever seen on Ralathor’s face.

“You’re right. They are just dreams.” It wasn't a smile. “Try not to think about it too much.”

Angus tried to find solace in those words and failed. “I’ll try.”