only a moment away

It's still light out when Kirishima heads back inside to meet up with the rest of the class. Bakugou stays outside for just a little while longer, watching the sun slowly sink into the horizon.

He leaves the sliding door open just a little bit when he goes back to his room, and sleep comes to him easier than it has in days.

Bakugou, Kirishima, and the three years at UA they spend bridging the distance between their balconies.

Written for the Krbk Ascent anthology (check out the rest of the collection!), with art by the lovely abbyslullaby.

The room— like the rest of the dorms— smells of fresh paint and the untouched clean of just-polished finishings. The floors are unscuffed, the walls immaculate.

In a corner, three mid-sized boxes are stacked neatly on top of each other, backed against a large suitcase. The rest of the room is sparse, a narrow bed against one wall and a simple desk-and-chair set on the other. It's a hot, sticky August day, but he starts unpacking with the kind of slow, methodical labor that draws beads of sweat from the heat simmering beneath his skin, igniting irritable pinpricks of fireworks from his palms. The AC stays off, the humid summer air pressing against him as he moves furniture and unfolds clothing and wonders how many people worked themselves to the bone to build these walls in three days' time specifically for his sake. For his safety.

It's too hot in the room, his chest too tight, the air too dead—

He pushes himself to his feet, stumbling out toward the sliding door and wrenching it open, taking the first gulp of fresh air like it's spring water in a desert. It's just as hot outside as inside, but here the air is thinner, and when he leans against the railing to soak in the sun, the heat that seeps into his pores is welcome warmth.

He glances over when the balcony door in the next room slides open and Kirishima steps out with a tentative greeting, his usually blinding smile soft and hesitant. Dulled.

That's because of Bakugou too, but he swallows the lump lodged in the back of his throat to respond. The class wants to get together downstairs, Kirishima's saying, and there'll be yakiniku for dinner if he wanted to come—

Bakugou snorts. He'd rather go to sleep, but Kirishima takes that in stride, doesn't push or wheedle, letting the conversation meander away.

It's still light out when Kirishima heads back inside to meet up with the rest of the class. Bakugou stays outside for just a little while longer, watching the sun slowly sink into the horizon.

He leaves the sliding door open just a little bit when he goes back to his room, and sleep comes to him easier than it has in days.

The room is dark— dimly lit by a sliver of moonlight— and a little cold, the chill of winter keeping the air inside stale and dry. It's late and he should sleep— had been meaning to since he got in hours ago, closed his eyes only to toss and turn and stay awake anyway— but he can hear the thump-thump-thump of the punching bag next door and the ache in his muscles sings not of exhaustion but a different kind of restlessness, so he shoves his blanket down and pulls a thick sweater on before he opens the balcony door for some fresh air. He rests his forearms against the railing, leaning forward eyes closed, lets the rhythmic beat of Kirishima training deep into the night lull him to some kind of calm.

He doesn't hear Kirishima stop or the door slide open or Kirishima step out until he's apologizing for being too loud, sheepish smile toothy and bright against flushed cheeks and brilliant eyes. Bakugou shakes his head, tells him there’s nothing to apologize to him for.

They were at the same mission with their internships that afternoon— they know why Bakugou can't sleep, why Kirishima can't stop training.

It's too cold for either of them to stay outside, but it's better than in. Out here Kirishima can launch into a tangent about post-workout cooldowns and Bakugou can lecture him on the importance of high-fiber diets to go with it, the conversation a different kind of rhythm but the same kind of calm, familiarity bred from habit and the countless nights they'd spent just like this.

They stay out as long as they can.

The room is empty, stripped back down to its spartan furnishings, walls faded where the sun found it, scuffed where the edge of a bed or a desk or Bakugou's palms reached it. There are two stacks of five boxes total where there had been three, two suitcases next to them where there had been one. A single duffel bag with extra room for the toiletry in the bathroom and the clothes he’s sleeping in tonight. He'll pack the rest in the morning, then they'll be taken down sometime during the graduation ceremony, or before it, or after. It doesn't matter.

Kirishima's already outside when Bakugou decides he's packed what he can, the smell of fresh rain still thick in the cool spring air.

Kirishima’s heading to an agency headquartered in Osaka and Bakugou's taken an offer in Tokyo, but when Kirishima turns to him with an easy smile and starts talking about how roomy the apartment he's getting is, or what weekends he'll come visit, the 500 kilometers between Osaka and Tokyo looming ahead of them shrinks to this, the less-than-a-quarter-of-a-meter between their balconies, the comfortable quiet and understanding that hangs in the air between them. It's always been like this, and it will always be like this— could always be like this.

Bakugou looks up, because Kirishima's chatter has gone soft and nervous, the flush in his cheeks a deep shade of rose, stumbling over his words in a way that makes Bakugou reach out, fingers curling around the back of his neck and drawing him closer, until finally, the distance between them disappears completely.

And it gets easier to breathe. 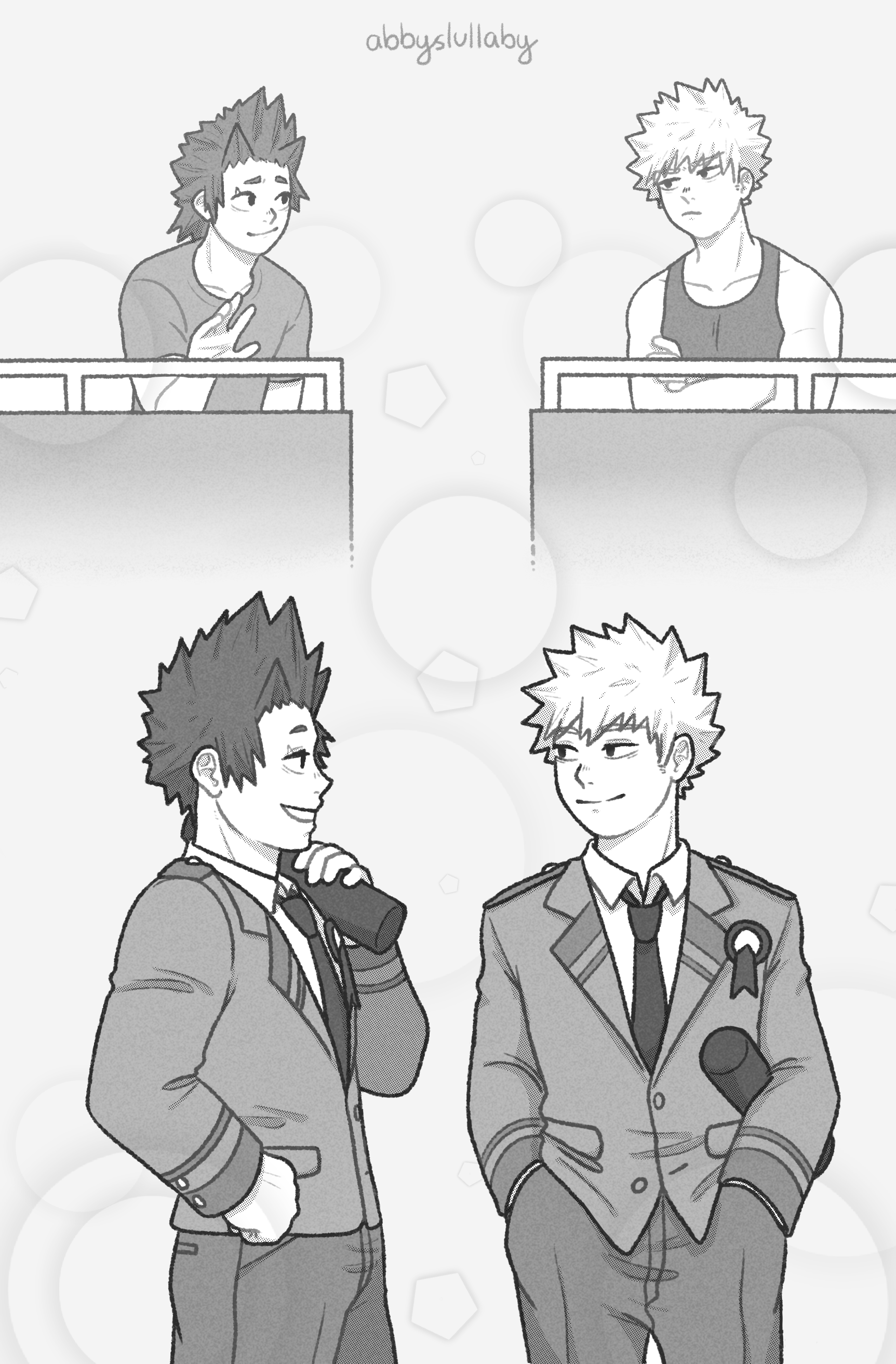 Thank you for making it here! Kudos and comments are always appreciated! ♥

If you like what you read here are my other Kiribaku fics.

Abby and Slumber are on Twitter if you wanna say hi!