It's a rainy night when Gilbert receives his love letter from Anne.

First kisses, torn letters.
A romp in the hay, the rain pitter-patters,
And in the twilight,
Two lovers unite

A reimagination of what might have been if Gilbert had read Anne's letter on time.

We all know the turn of events after Gilbert doesn't receive Anne's letter. But have you wondered what might have been if he'd read her letter on time?

The events in this story take place mid-way in episode 9, season 3.

This is a joint collaboration with the amazing artist, Joss (@jossrezz on twitter and instagram). Her wonderful artwork gives life to this story and sets the mood perfectly.

The story will be updated frequently, with the artwork acting as the perfect accompaniment.

Chapter 1: The Odd Bridge That Linked Day To Night

He stared up at the sky, now a cool purple marred by some ominous dark clouds. He'd always disliked this part of the day, the odd bridge that linked day to night. Dusk was not a time he was particularly fond of. What good could come out of something that was ending?

Yet, for the first time, he realized that while the day might have ended, the night was only beginning 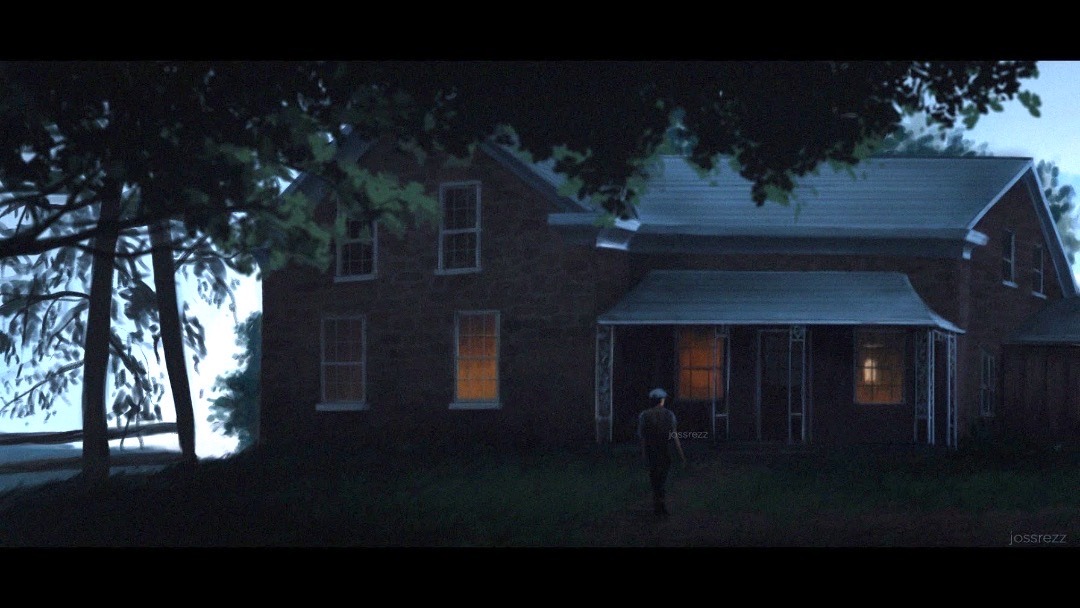 Gilbert trudged back home, his legs weary but his heart light.

He'd spent the better part of his day wandering the pathways of Avonlea, as if marking his spot with every step, with every breath. He had to admit that a certain red-headed girl had dominated his thoughts the entire day.

He'd seen her as he helped clear up what little remained of the schoolhouse with the rest of the boys. Seen her taunting smile as she raised her hand up to answer a question before him. Seen her eyebrows turn downwards in anger as he procured one mark more than her.

He'd also wandered amidst the forest, taking in the sights and sounds around him. He hadn't the slightest clue where his future would lead him, and so he wanted to make sure he had memories of Avonlea to keep him company. Yet there, as he stood in the center of what was once a sacred story club, Gilbert only had memories of her. He'd heard her sharp intake of breath as she gasped excitedly when a new idea took form in her mind. He'd heard the scratches of her pen as she quickly jotted down her fervent thoughts.

And then, as the day neared to an end, he stood at the clifftop overlooking the vast expanse of the sea in front of him. Yet he hadn't felt the sea breeze rustle the curls at the back of his head, hadn't felt the blaze of the sun, warming his stressed self. Instead, he'd felt her. Felt her hand in his, delicate and small, as he spun her around to the tune of the Dashing White Sergeant. Felt her eyes bore into his as her inquisitive mind questioned him about the latest medical breakthrough.

Anne, his Anne with an E, was the only one for him. It always had been and always would be Anne.

Now, as he slowly walked back home, the sun having winked its last light a few minutes prior, he wondered what he ought to do next. He'd already penned his letter to Anne earlier, as he sat overlooking a group of young children play at the shoreline. He knew what he wanted to tell her yet hesitated on whether to act on it. He still couldn't forget the look on her face that night at the bonfire. How he'd left her at a loss for words and how she'd tried hard to let him down easy.

As he ambled along the pathway to his house, he kicked a loose stone in frustration. A small, nagging part of him worried that maybe he hadn't understood her correctly that night. That perhaps her speechlessness was due to a pleasant surprise rather than an unpleasant shock.

He stared up at the sky, now a cool purple marred by some ominous dark clouds. He'd always disliked this part of the day, the odd bridge that linked day to night. Dusk was not a time he was particularly fond of. What good could come out of something that was ending?

Yet, for the first time, he realized that while the day might have ended, the night was only beginning.

Savoring his last few minutes of blissful silence, Gilbert quickened his pace. He could hear the Lacroixes having their daily argument, and he berated himself for not arriving home earlier. Usually, these heated discussions started a little later, with enough time for him to be safely placed in his room. With a soft chuckle, he wondered what would become of him once Delphine started to babble as well.

However, as he opened the front door, he was greeted with steamy silence. Bash sat at the kitchen table, forlornly staring off into space, a smiling Delly in his hands. Mrs. Lacroix sat near the back window, furiously attacking a piece of knitting.

"Uh, hello?" said Gilbert, hanging up his jacket and cap at the coat rack.

"Blythe," grunted Bash, looking up at him. "Good day to you! Where've you been all day, man?"

"I..was helping out at the old schoolhouse,' muttered Gilbert, going to pick up Delly. "And how have you been, young lady?" He tickled her under her chin, the sounds of a delighted Delly filling the kitchen.

"Going mad with her grandmother's ramblings, I'm sure," said Bash.

"Oh, is that it?" Mrs. Lacroix set down her knitting with force. "I'm the bad one now?"

With a sigh, Bash raised his arms. "Please, I surrender. I cannot do more of this tonight."

Mrs. Lacroix huffed, coming towards Gilbert. "Mr. Blythe, can I set the table for you?"

"Please call me Gilbert," he said with a smile, placing Delly in her high chair. "And no, that's fine. Have you all eaten already? If so, I can take my dinner up to my room."

Bash pushed back his chair and stood up with a sigh. "No, and I don't plan to. I'm going to take Delly for a walk. Gilbert, I'll speak with you later." Without another word, he picked up his daughter and left through the backdoor.

Gilbert stared quizzically at his now empty spot. "He seems very angry today." He looked at Mrs. Lacroix, a small smile on his face. "Must have been one hell of a fight."

"This is nothing. That boy needs a nice whack on his head, is what he needs," she said, shaking her head. She made to head out of the room, backtracking at the last moment. "Oh," she turned around, removing a note placed under the vase on the table. "This is for you, Mr. Blythe." 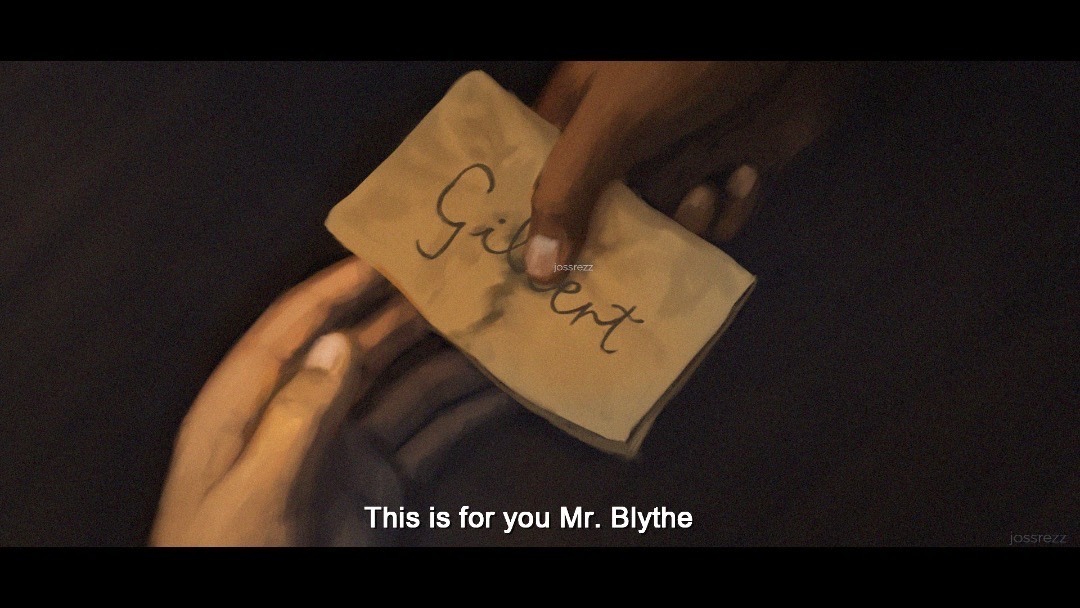 "Me?" He looked down to find his name elegantly written on a small piece of paper. He slowly took the paper from her hand, the beat of his heart suddenly increasing in tempo. He had a similar note tucked into his pocket at that very moment, but he dared not hope. "Who is it from?"

"A young girl came by this afternoon. Said her name was...Anne? She seemed to know you and Bash," she said. "Was quite familiar with the house, actually." When Gilbert kept silent, she continued. "Wait, Mr. Blythe, you do know her, right? Oh, I hope she wasn't a vagabond. She did seem a bit odd...but she was also very kind. Mr. Blythe? Mr. Blythe, are you alright?"

Though it appeared that Mr. Blythe wasn't quite alright. He held the piece of paper with a grip so tight, Mrs. Lacroix was sure he would tear it. 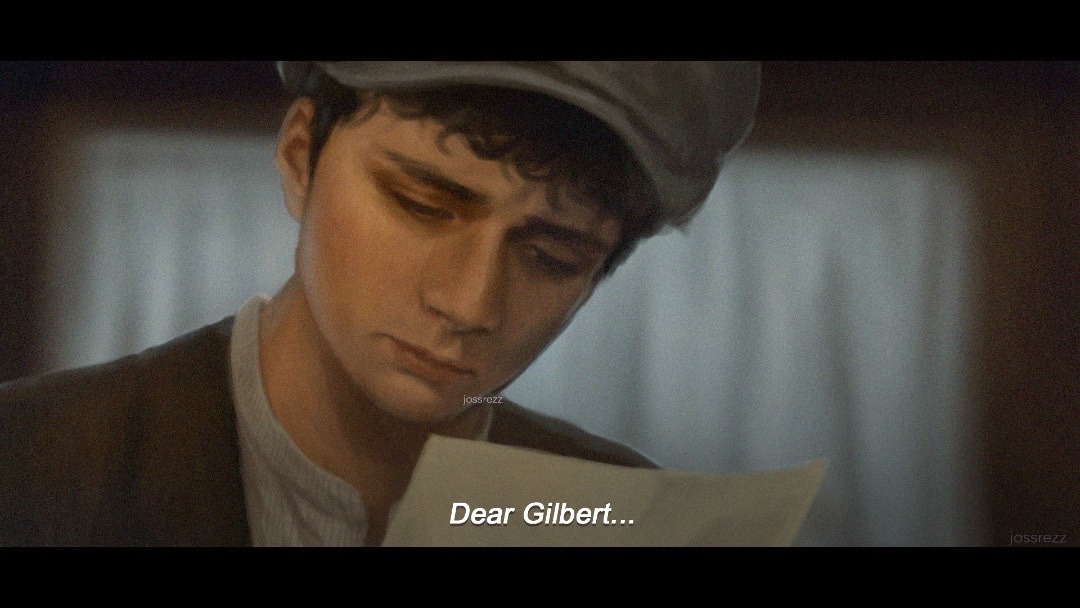 For the next few minutes, Gilbert's increased breathing was the only sound in the room.

Mrs. Lacroix, for the very first time, was at a loss for words. What in heavens was in that note, she wondered.

Pen? She wants her pen back when she's stolen my heart?

Gilbert stood at the kitchen table, clutching the note in his hand. Was it possible? Were the words in his palm thoughts from Anne? 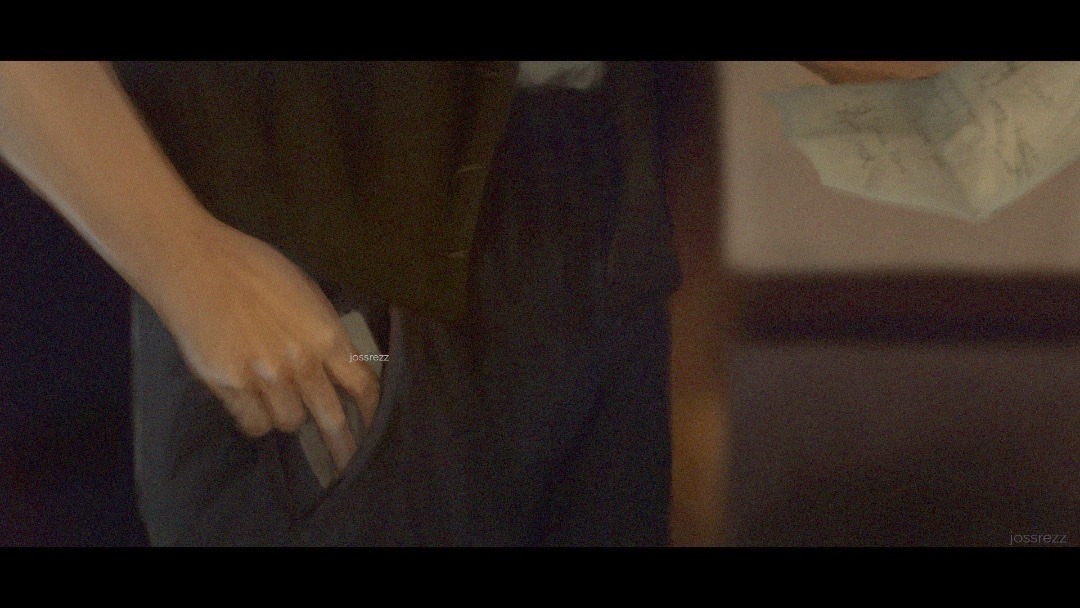 The words before him swam in his head, his face flushed hot, and he was sure he was in a state of delirium. Yet all he cared about was Anne, his Anne.

Before he could second guess himself or force himself to think things through, Gilbert ran out of the house. No, he needed to hear these words from Anne herself. He wouldn't believe it otherwise. Wouldn't dare.