it just takes some time

I made a rec list yesterday, and then I followed my own advice and reread "Teenage Kicks." After bouts of crying, I drew this.

The text below the picture is what the dialogue I drew it for. This is probably my favorite scene. It shouldn't spoil anything, but it is a revelation that Rodney has about John. 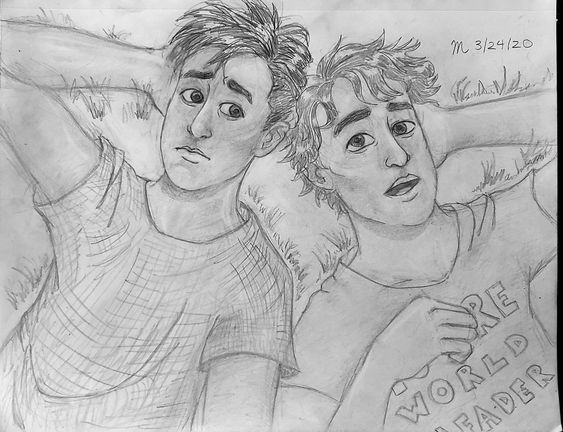 "Didn't you have better things to do?" Rodney asks.

"I don't know." Rodney waves a hand. "Hanging out at the mall or whatever you cool kids did."

John looks at him oddly, and doesn't answer. Suddenly, Rodney realizes he's been carrying around his own set of assumptions about what Sheppard was like when he was growing up. He's always subconsciously tagged Sheppard as one of the popular kids: smart, good-looking, wealthy—someone whom Cheryl Blanchard wouldn't have called the idea of dating silly. It hits him now, in a kind of paradigm shift, that he's been wrong all along, and that John was just as much out of step with his peers as Rodney was. Sheppard grew up inside a bubble of isolation which was more materially comfortable than Rodney's, but no less lonely.

Title taken not from "Teenage Kicks" but from "The Middle" by Jimmy Eats World.