On the new PBS reality show "Star Trek," eleven highly trained contestants will team up for a simulated space voyage, completing challenges that test their mettle as explorers.

All updates will be posted here in chapter format, but you can also follow on Twitter, where I'm posting the bulk of the multimedia content. I'm planning a 50/50 split between tweets and traditional fic in AO3.

Note about images: If you're having problems viewing the images, try deactivating your ad blocker. If this doesn't work, all images will still be available on the Twitter thread! 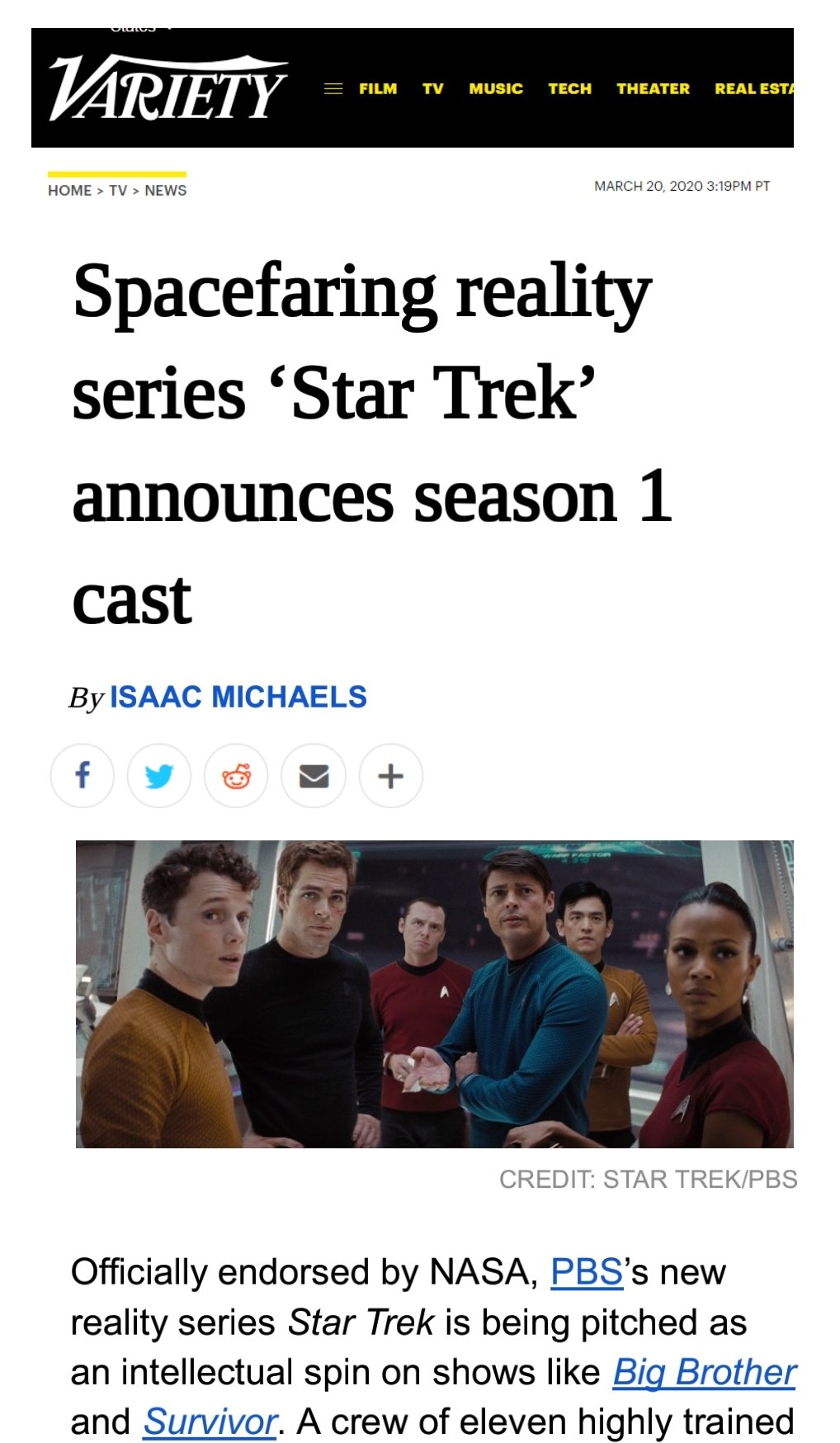 Officially endorsed by NASA, PBS’s new reality series Star Trek is being pitched as an intellectual spin on shows like Big Brother and Survivor. A crew of eleven highly trained individuals will spend six weeks on a simulated space voyage, completing challenges that test their mettle as scientists and explorers.

Unlike most reality shows with an ensemble cast, Star Trek will be more about teamwork than competition. Captained by 28-year-old mountain rescue pilot James Kirk, the crew includes astronauts, physicists, anthropologists, and Olympic athletes. Aimed at the 18-34 market, weekly episodes will be accompanied by live social media updates from the cast, who are otherwise cut off from “Earth.” 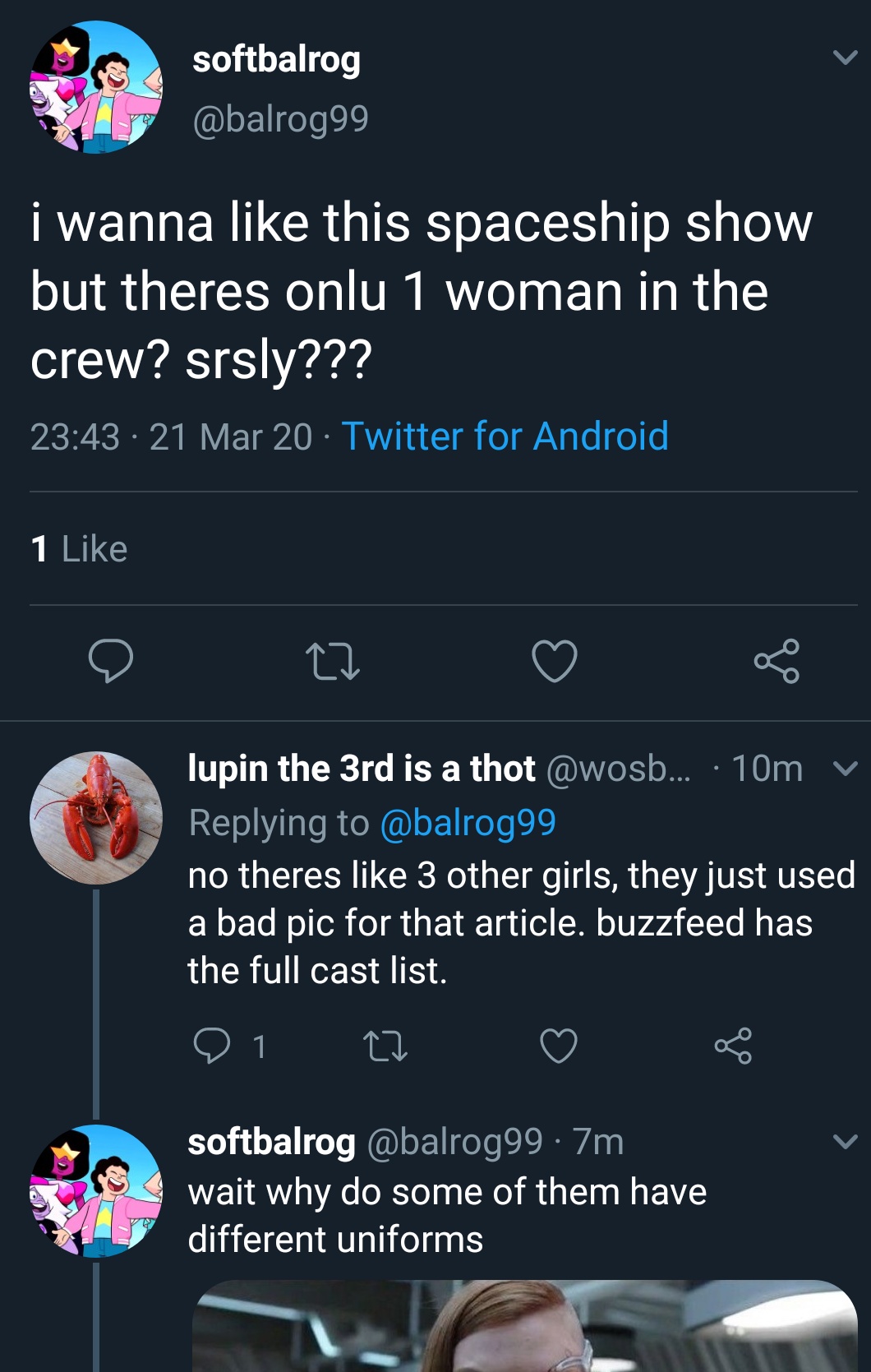 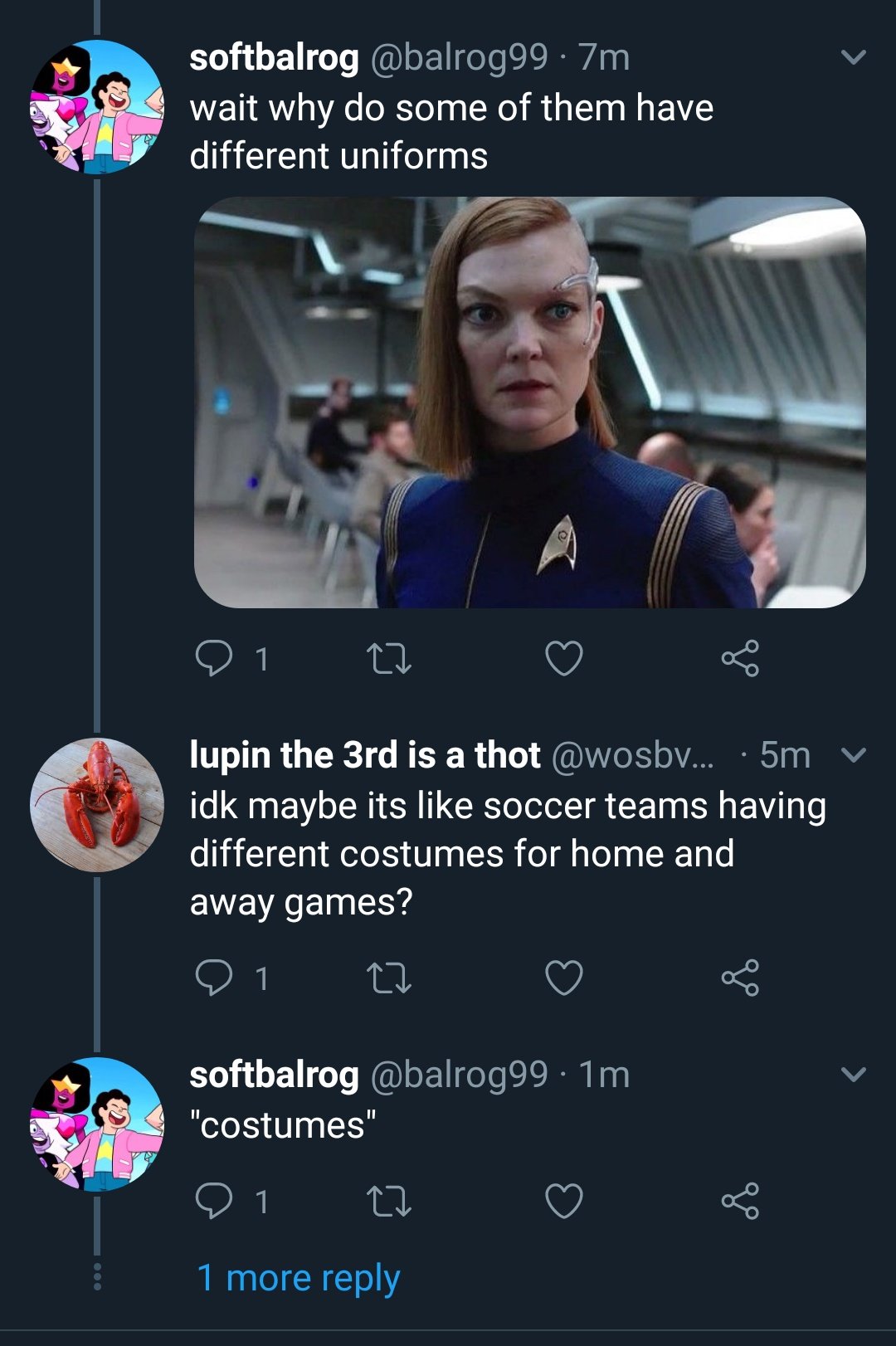 @softbalrog: i wanna like this spaceship show but theres onlu 1 woman in the crew? srsly???

@wosbv72: no theres like 3 other girls, they just used a bad pic for that article. buzzfeed has the full cast list.

@softbalrog: wait why do some of them have different uniforms

[Image of Keyla Detmer in a Discovery-style Starfleet uniform.]

@wosbv72: idk maybe its like soccer teams having different costumes for home and away games? 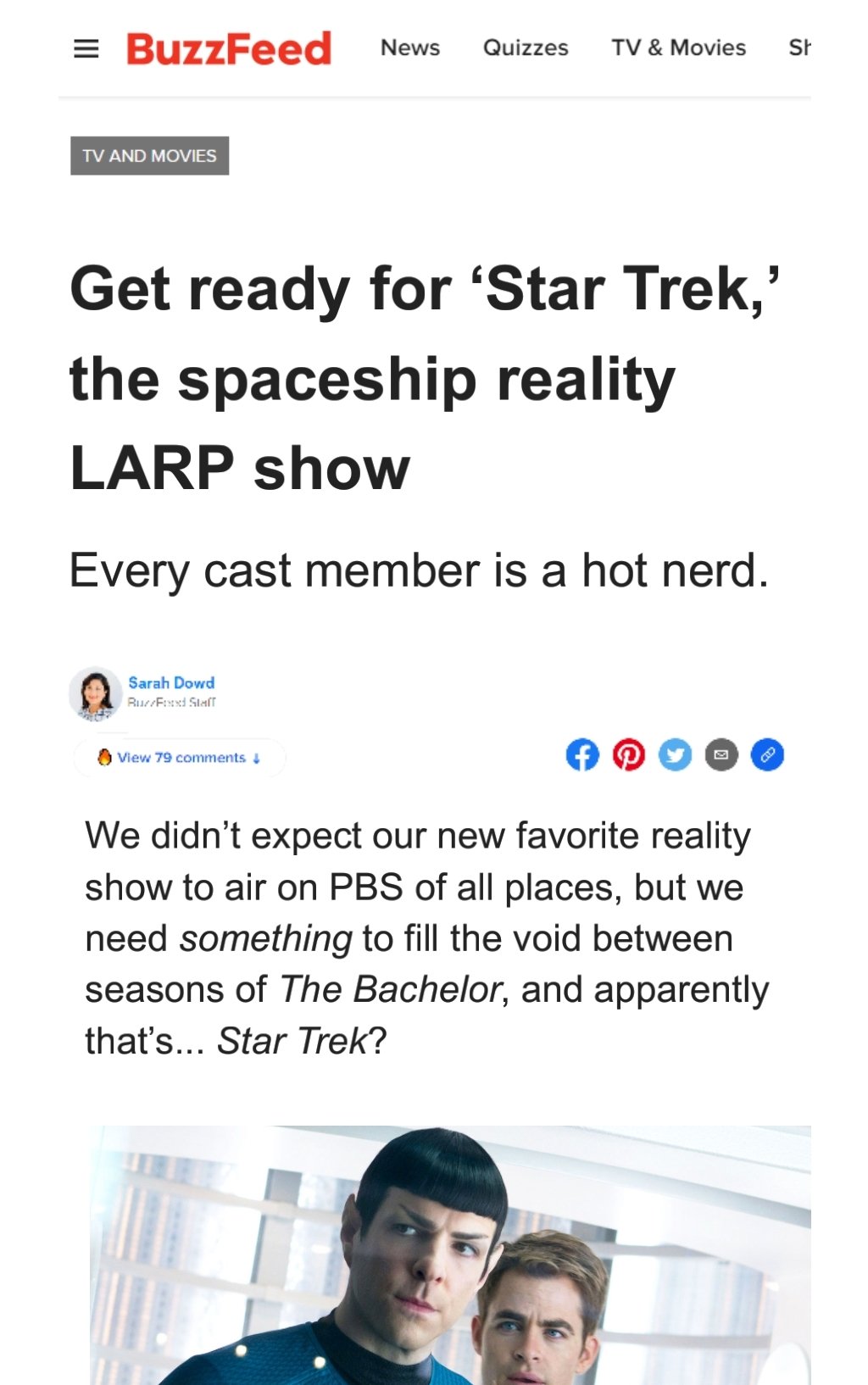 We didn't expect our new favorite reality show to air on PBS of all places, but we need something to fill the void between seasons of The Bachelor, and apparently that's... Star Trek?

This show is meant to be an educational look at the future of space exploration, but let’s be real here: it’s a big-budget LARP. Its creators clearly had fun with the worldbuilding, because there's a whole backstory involved. Star Trek's cast of sexy nerds are officers on the U.S.S. Enterprise, tasked with exploring the galaxy. They’ll go on missions to (fake) alien planets, following orders from a peacekeeping organization called Starfleet.

We kind of expected to see some Z-list celebrities in there, but PBS went for a crew of... actual smart people? Check out this exhausting squad of high-achievers: 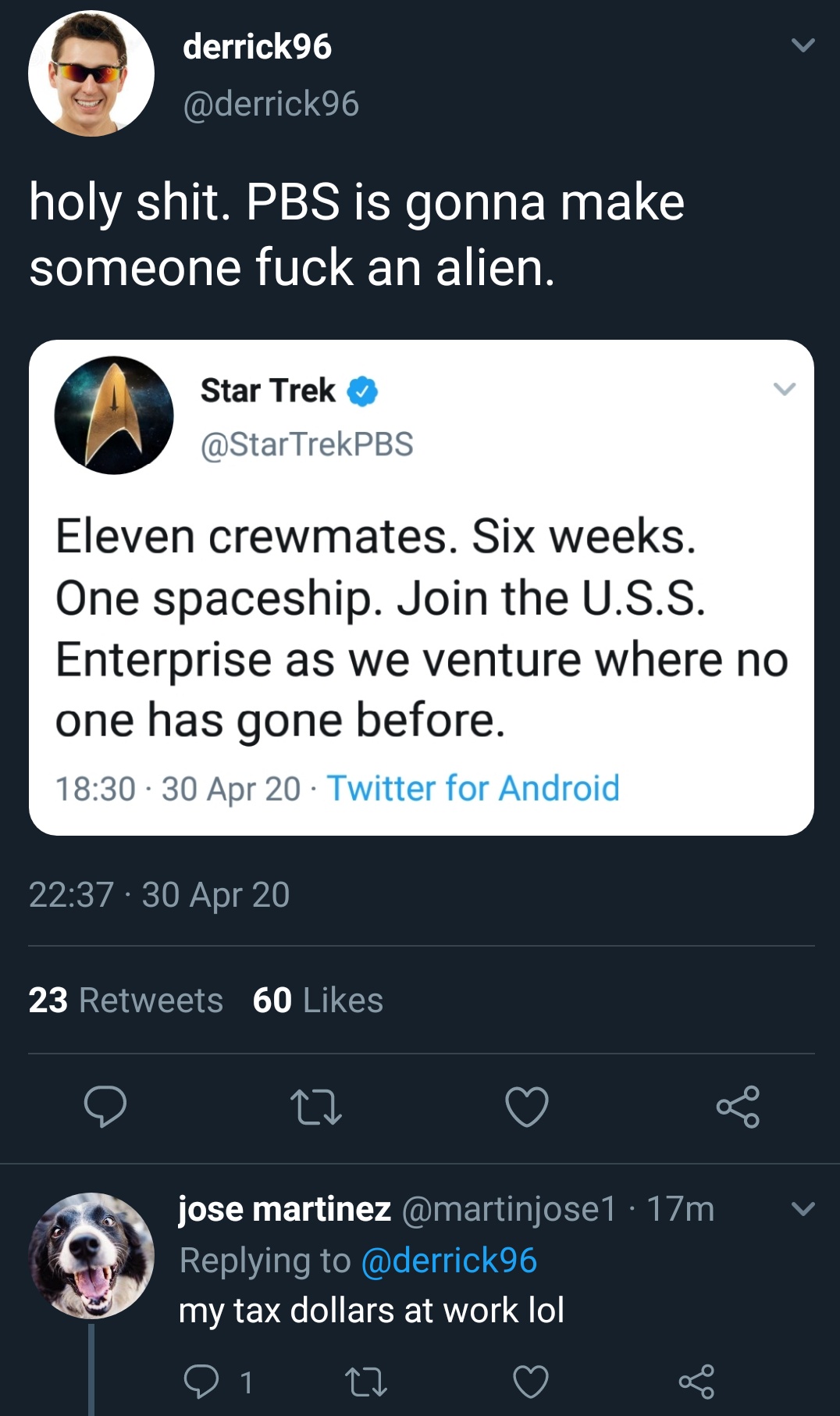 @StarTrekPBS: Eleven crewmates. Six weeks. One spaceship. Join the U.S.S. Enterprise as we venture where no one has gone before.