I’m here for you

Katherine finds love in the arms of her best friend Darcy

“It’s over Eddie, we are over!” Katherine pushed the bottle of whiskey on his chest, and walked out of the door. Eddie looked at the bottle, once again the monster had come out, it was too much to learn what had actually happened to Alex, how his involvement with her got her killed, he relapsed, instead of talking to Katherine he chose his very own poison.

As Katherine closed the door to the place, she called home, the place she had been so happy, the place she has raised her son in, she felt like closing the final chapter of her marriage. Theo was at Gary’s for a sleepover, she wouldn’t have to worry about him seeing her like that, and most importantly seeing his dad like that. But she needed someone, someone she could trust, someone who loved her unconditionally, and would have her back, someone who could understand. Darcy.

Katherine knew already that Darcy was at her home with Liam, after her friend broke up with Gary, seeing how much him and Maggie loved each other, she was staying home more than usual. Katherine knocked on her door, but nobody answered, was Darcy not home after all?

“I should have called first,” she murmured, and then shut down on the carpeted floor, next to Darcy’s door, tears started falling down her cheeks, her body shook from the silent sobs that escaped, she hugged her knees to her chest, and let her mind go astray. Katherine didn’t know how much time have passed, when she heard her name.

“Katherine? Katherine! Oh my god, are you okay? What happened?” Darcy dropped on her knees, and took Katherine’s face in her hands.

“Shh, come on, let’s go inside,” Darcy helped her up and opened her door. She grabbed the bags of groceries she had set on the floor a moment ago, and got inside.

Katherine walked in small circles, while Darcy put her groceries on the kitchen counter and grabbed a glass of water for her.

“Hey, come,” she said softly and led Katherine to the couch.

“I left…” Katherine whispered, not looking at Darcy and pause, not sure how to put into words what had happened.

“You know, you can tell anything,” Darcy told her after a while, as she brushed her hair behind her ear to see Katherine’s face clearer, the raised her head gently with her palm.

“I left him, Eddie…I…” Darcy’s comforting hand stroking her cheek, and her kind understanding eyes, gave Katherine the courage, to continue.

“I broke my marriage with him and walked out the door.” She started sobbing again and Darcy took her in her arms, hugging her tightly, trying her best to show her all the love and care she deserved.

They stayed there for a while, Darcy only telling her that “it’s okay, everything is going to be okay” to sooth her friend through this pain. Katherine cried and cried until she fell asleep, exhaustion taking a toll on her.

There have been days, weeks even since Katherine crashed at Darcy’s place, they have been living together for as long, Gary dropped off Theo there the day after, when Darcy called. The kid didn’t understand completely what had happened, but seeing his mom so distressed, he soldered up, he told her about three days in, at staying with Darcy, that “I miss daddy very much but right now mommy really needs, so I’m not going to complain…” Katherine cut him mid-sentence, her kid was so brave, so she had to be too, “no baby, you can see your daddy whenever you want, and he needs you too you know,” he nodded and she kissed his head, and hugged her little boy.

Darcy was watching from the other room, no matter how much Eddie had hurt her, she never said anything bad about him in font of her kid, she was once again the bigger person, and Darcy couldn’t help but love her a little more than before.

“Look, we were never friends, and don’t think I care one bit of what you do with your life, but you got a kid, and Katherine tries her hardest to make it easy, for you, so do yourself a favour and go into rehab, do your son a favour and be the parent your brilliant kid deserves!” Darcy was good few inches shorter than Eddie, but looked like a giant standing up for what was right. She pushed her finger hard on his chest with every word. It was morning and he was obviously hungover, and she had had it. She didn’t know what came into her and decided to come visit him this morning, but she sure didn’t regret coming here and telling it to his face. She gave him one hard look, and dropped a paper with a phone number, and a flyer on the table.

“Call them, veterans I know have gotten better within this program, don’t blow it like you did with Katherine!” he was speechless, he knew deep down that Darcy was right. He watched her walk out the door, and the slam of it was like a wakeup call. He looked around, the house was a mess, he looked at himself, he needed a shower, he needed to get his shit together, he grabbed a garbage bag, and started throwing all the empty and half filled bottles of alcohol in it, he took the trash out, he cleaned up the mess around the house, and he got himself a long shower. He picked up the phone, his hand trembled, but he dialed the number on the paper. An hour and a half later, a car came to pick him up, a duffle bag in one hand, a letter on the other. He asked them to drive him to Darcy’s, he asked them to leave this letter on her mail box, it was addressed to Katherine and Theo.

Katherine was feeling better, less guilty for leaving Eddie when he needed her the most, Darcy had helped her with that, the fact that he had gone to rehab helped with that. But there were days, she missed having someone, Eddie was the man she fell in love with, and she married him, and she had a son with, she was with Eddie for longer than she wasn’t with him, in her adult life.

Darcy was an ex-marine, she fought in wars, her bravery was something she was proud of, but when it came to expressing her feelings for Katherine, she felt like a scared little girl. With Gary it was easy, he was a dude, he was single, he liked women, but Katherine? Katherine had been married to a man for so long, Darcy realized that it had never come up whether either of them fancied women. What if Katherine…

No, she didn’t want to think about it, she just had to be brave, it was now or never.

“I can kiss you,” Darcy blurted out, Katherine chuckled and kissed Darcy’s cheek.

“I’m serious…” Katherine moved her head back and looked at Darcy for a long moment. The moment lasted way longer than it was comfortable so Darcy looked away and made to stand.

“Wait, are you actually serious?” Katherine’s brain went into overdrive, Darcy looked at her and nodded, tears started forming in her eyes.

“For…for how long…?” Katherine didn’t know what else to ask.

“Ever since I met you?” Darcy averted her eyes again, not willing to face Katherine’s reaction. But her best friend put a palm on her cheek and pushed her head lightly so they could look at each other.

“You never said anything…” she said softly, Darcy leaning on the palm and closed her eyes just for a moment to gather her thoughts, to shallow the lump forming in her throat as more tears escaped her eyes.

“You were married, to a man, I don’t even know if you could ever like me like that, how could I risk damaging our friendship, risking losing you in the only way I could have you.” Darcy was fully sobbing now.

Katherine was silent, but took Darcy in her arms, the other woman held her friend for dear life, relieved that she had not completely destroyed everything she had with Katherine.

“I would have never stopped being your friend, Darcy.” The soothing words made Darcy sit up and wiped her tears away. Katherine smiled.

“Do you still want to kiss me?” she asked, and Darcy stopped what she was doing and looked at her as if she grew a second head.

“Granted I haven’t been with a girl since I got with Eddie, so excuse the awkwardness, but I would really like to kiss you too, you know” Katherine smiled and took Darcy’s face in her hands. She looked at her eyes to make sure Darcy really saw her truth, and then she looked at her lips. It was all Darcy needed to lean in, to connect with Katherine in a way she longed for.

It started slow, and Darcy melted into Katherine’s arms. They kissed for a while; Darcy was the one who broke the kiss first.

“Is this really okay with you?” Darcy asked, still not sure how to approach her friend.

“Yeah…” Katherine whispered and leaned in to touch forehead with her,

“I would like you to take me to bed…” It was barely audible but Darcy heard it,

“Are you sure?” she was terrified but so hopeful, so her heart skipped one too many beats when Katherine nodded and then kissed her again.

Slowly they walked to Darcy’s bedroom. She lowered Katherine on the bed, kissing her, when hands started to roam under t-shits and fancy button-ups, Darcy would make eye contact with Katherine to be sure they were both into it before going further. They made love, it was slow, it something they both needed, the intimacy, the tenderness, the love and care.

They didn’t know what it would mean for them tomorrow, but tonight it was all about them.

A/N: LOOK AT THEM AND THEIR DIMPLES: 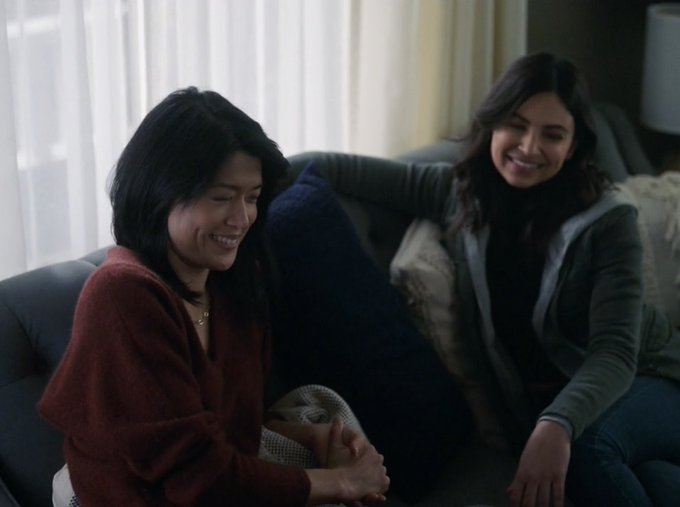 AleXxander as well as 2 guests left kudos on this work! (collapse)