A Man Upon the Land and a Silkie in the Sea

In Norway land there lived a maid, and to her child this maid began: This is complicated, and I’ll try to use my own words, but there are so many words and most of them aren’t mine.

In Norway land there lived a maid, and to her child this maid began: This is complicated, and I’ll try to use my own words, but there are so many words and most of them aren’t mine. It is my story but it belongs to you as well, and to your other mama Jessica, so it has to be more than one thing at a time. A story is a bridge between perspectives. It connects. It is a man upon the land and a silkie in the sea. I met a man of double deed, who sowed his garden full of players, and one man in his time plays many parts. I’ve done that. You’ll learn.

Most people don’t double themselves. It’s easier that way— not to look at yourself from outside. O wad some power the giftie take from us. It’s a gift to be simple, it’s a gift to be dull, it’s a gift to have no brain in your skull. Doesn’t make you a bad person, not exactly. They’re all made out of ticky tacky and they all look just the same, and they think simple thoughts about things:

Must we? The mind is its own place, and in itself, can make a heaven of a college dorm, a hell of a suburban three-bedroom. A demon lover out of a bad breakup. I don’t use that word, by the way. I prefer sheyd, plural shedim.

What’s in a name? That which we call a sheyd is flexible. Morally ambiguous. Prone to feats of memory and bad puns. Shedim throw shade. Shed inhibitions. Sheyd auld acquaintance be forgot? Or shall they, seeing me, forget, that they are old, and I a sheyd? I can do this all day. Don’t test me.

I worry. I really do worry. You’ll come to me someday, I’m afraid, once you’re old enough to realize and you’ll ask me: Oh tell me this, now, Jellon Grame, and pray you do not lie: Why did you take me away and teach me to be half-human, half-sheyd? But I’m too hard on myself. I’m not Jellon Grame— I didn’t kill anyone. I was angry, and I’m still angry. A soft answer turns away wrath, but threatening me with salt and the names of— never mind. I'll forgive her, one day. If she asks me to. It’s not a murder ballad, this song of ours.

Let’s go back to the other story: the silkie, the seal-man. The man of double deed, who comes in the night and takes his little son away. It happened on a summer’s day, the sun shone hot on every stone, he took his little son with him and taught him how to swim the foam. A double-edged gift, I have to admit. The boy’s mother— she marries a hunter, and he shoots down the silkie and her son. That could happen. You’ll learn, someday, how salt can burn, how a name can ring in your ears for days till your head splits with it.

You’ll have to decide whether it was worth it, in the end. You’ll draw some conclusions about me. I have a vicious temper and a short little span of attention and an addiction to other people’s words. Songs stick in my head like burrs. I’m so hard to handle, I’m selfish and I’m sad and I lost track of you for years, trapped under the hill, sailing the seas, whatever you want to call it, trapped in my own goddamn head. That could happen again too.

I’m trying to sort my shit out. It doesn’t always work. Sometimes the songs get ahead of me. Mother, mother, read my dream, I fear it means no good. They speak with an evil, they speak with a hate, they speak for the devil that haunts me. I walked back into your life and I didn’t even call ahead. I pushed Jessica too hard and she snapped. Maybe I am a demon after all. I try not to be.

Here’s what I can teach you: there’s freedom in chaos, wisdom in doubleness. The sea and the land know one another better than they know themselves. The light shines brightest in the sheyd. I made mistakes, but I’m doing my best. I was sitting at my window, looking out at the rain— something grabbed ahold of me, and it felt like love is like a melody that’s sweetly played in tune, like a birch tree at the Burn of Hallaig, a birch, a hazel, a slender straight young rowan— Like you.

I’ll teach you another song. No, not a ballad. It’s a song my mother taught me. It comes from far away over the sea, and it’s in another language. Yes, you can learn to speak it. Shedim are good at languages. Yes, you’ll meet your grandma soon.

In Norway land there lived a maid, and to her child this maid began:

All this whole world is a narrow bridge, and the important thing is— not to be afraid. 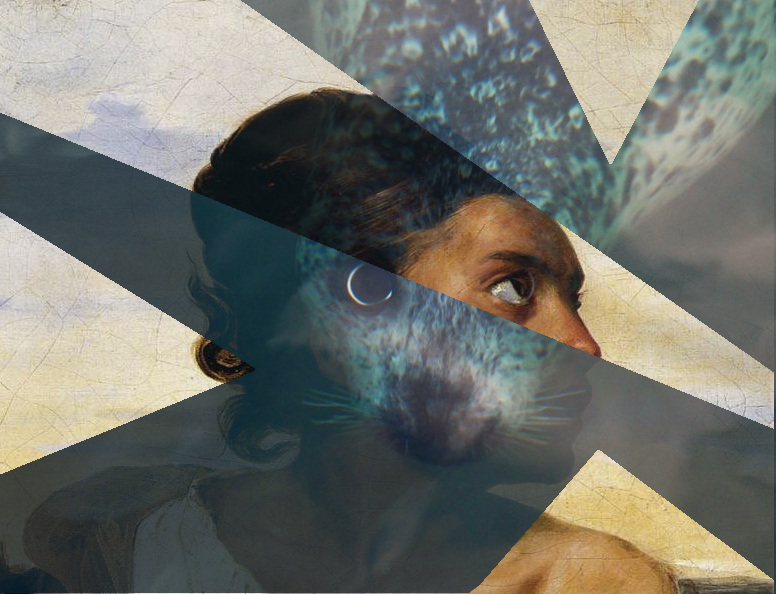 The Great Silkie isn't as ubiquitous as the Demon Lover, but here's June Tabor and Broadside Electric

My beta reader suggested I give the rest of the playlist for Lia's other quotations: