Discovering new things in the bedroom is one of the main side effects of finding out your boyfriend is actually an alien with tentacles.

Having an alien boyfriend changes surprisingly little for Arthur. There are the little things, like the way Eames doesn’t care anymore if Arthur notices him edging the thermostat up until it’s almost unbearably hot, or the fact that more and more often he doesn’t bother pretending to look human. There are those things, and then there’s the sex.

The sex has changed a lot.

“Eames,” Arthur says, clawing at his shoulders and trying to grind down harder, knees digging into the mattress, “Eames, move.”

Eames just growls, one tentacle twining Arthur’s wrists together behind Eames’s head even as the others curl tighter around his body. “Wait.”

Arthur tries to remember to breathe as the tentacle tugs his wrists down, just far enough for him to really feel the stretch in his shoulders. It pulls them closer together, chest to chest, and Eames nips at the exposed line of his throat when he tips his head back and moans.

"God, you're soft," Eames says, squeezing a little tighter. He says it like he usually says you're gorgeous, low and reverent.

The constant warm, slick pressure wrapped around his torso is a gentle counterpoint to the sharp stretch of Eames's cock inside him, and Arthur struggles a little to feel the tentacles pulse against his skin. "Yeah, but you're not about to break me. Fuck me, come on."

Eames laughs, a rush of warm air against Arthur's cheek. "How many years has it been, and you still haven’t gotten any more patient.” His fingers slip over Arthur’s lower lip.

“You act like it’s a bad thing that I’m still desperate for you to pound me sooner rather than later.” Arthur squirms as he laps at Eames’s fingertips. The pads of his fingers are rough, pushing in to press down on Arthur’s tongue until all he can do is suck around them.

“So you’re desperate for it, are you,” Eames murmurs, shifting his hips, and it’s got to be a deliberate tease, mocking Arthur with the fact that he can’t move, can’t get any leverage against the strong muscle twined possessively around him.

The tapered tip of a tentacle edges into his mouth, smooth beside Eames’s fingers, so Arthur just nods in response and sucks a little harder. He opens his eyes when Eames pulls his fingers free and trails them down the exposed parts of his spine, cool and wet, until they’re stroking at him where he’s already stretched open, teasing him with the prospect of more but not pushing in.

Arthur tilts his head back until the tentacle in his mouth slips out. “You are such an asshole,” he grits out, but he gives the tentacle still curling just in front of his lips another lick anyway, biting his lip when it makes every other tentacle wrapped around him shiver and tighten just a little more. Fuck, it feels good, slick heat holding him anchored.

“You don’t like it?” Eames asks softly, letting the tentacle brush gently over Arthur’s lip until he licks at it again.

This time Arthur relaxes into the quick squeeze of the tentacles instead of tensing against it, and the pressure forces out his gasp. “No,” he says, trying to shift his weight only to have the lone tentacles curled around his upper thighs tighten their grasp, pulling his legs a little further apart. He moans when Eames pushes in deeper. “No, I... it’s good. Tighter. Please”

“Tighter?” Eames slips the very tip of a finger into him.

“Yeah,” Arthur says, shuddering. The pressure around his torso increases, not much, but enough to make his cock jerk against Eames’s stomach.

“You really like that,” Eames whispers. The warm weight of his other hand settles across the nape of Arthur’s neck. “Breathe out for me, love, on three. One.”

Arthur knows, he knows as soon as Eames says it what’s coming, and the thought alone is enough to drag another moan out of him.

“Two.” Eames’s fingers rub soothingly at the ridges of Arthur’s spine, just below the hairline. “Three,” he murmurs.

Arthur breathes out, hard, and the tentacles tighten even more. Enough to stop him from gasping even though it’s good, so good, so entirely and utterly surrounded and filled.

Eames squeezes him rhythmically, testing, his own own breath coming in harsh bursts against the skin of Arthur’s throat. “Fuck, you really can take anything, can’t you.”

It’s not true, it’s not even close to true. Arthur can take anything Eames gives him, but he can’t even suck in enough of a breath to say so now that Eames is rocking up into him with shallow thrusts.

“Bite me,” Eames says, broken, and the tentacle tip slides into Arthur’s mouth again. “Bite me if I hurt you, I’ll let go, okay.”

Everything constricts again, delicious pressure, and making Eames let go is really the last thing on Arthur’s mind. Especially with the way he’s moving, slow, measured rolls of his hips, pulling Arthur down harder on each thrust up.

Time stretches out on the insistent tension of Eames’s tentacles squeezing every short, sharp breath out of his lungs, the slow pleasure pulsing just beneath his skin. Eames bites down on the slope of his shoulder when he comes, adding sharp pain a mix that is already too much but not enough at the same time.

“Eames,” Arthur sobs, overwhelmed with sensation but still not quite close enough to come.

Even as Arthur nods the tapered tip of one tentacle brushes over his hole where he’s still spread open and slick with Eames’s come. He can’t even suck in enough of a breath to moan and its torture, amazing, skin-tingling torture as it teases over sensitive skin.

The tentacle pushes in finally, opening him up a little more, enough to let Eames’s come leak out and slide wet down his inner thigh. Arthur shudders, writhing against Eames’s grasp as he comes, surrounded and filled and held so tight that it aches.

He sucks in a breath as the tentacles loosen, but they don’t let go; a firm touch all over his skin that’s becoming more and more comfortingly familiar.

The sex is definitely different.

With art by Platina 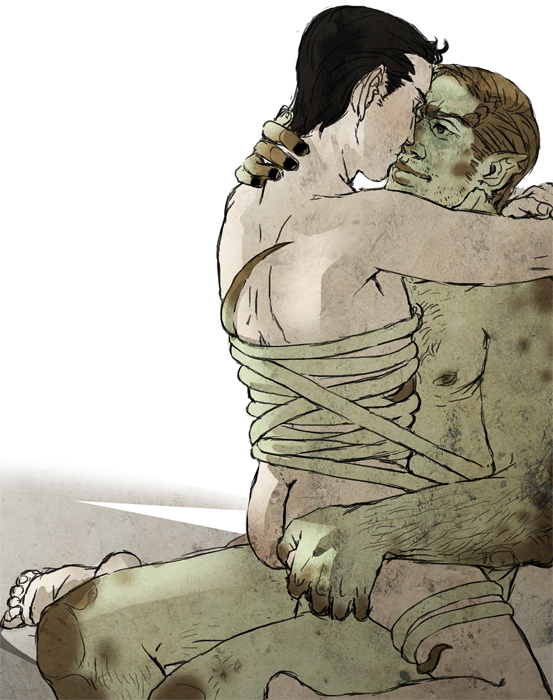