He is a Ghost who likes to dream. She's a Guardian who wishes she didn't.

Book 1 When he found his Guardian, all he could think of was how they'd be great together. How they'd be heroes. Make a difference. Those sorts of things. But what he hadn't expected was just how badly he'd mess up. Because she remembers. Her name. Her death. And everything she lost. COMPLETE

Book 2 The Last City isn't home. Her Light is wrong. But her Ghost insists she give him time. Time to make her see she's meant for this.

And while Nicole struggles to accept her second chance at life, the Vanguard has struggles of its own: Murders. Guardians and their Ghosts have turned up dead within the walls, their Light ripped from them and their bodies no more than empty husks.

Completed and abandoned. A conclusion is provided.

Update schedule: Once every month or maybe twice. Who knows?

Cover art by the fantastic @rocket-away. The first chapter is right below it :) 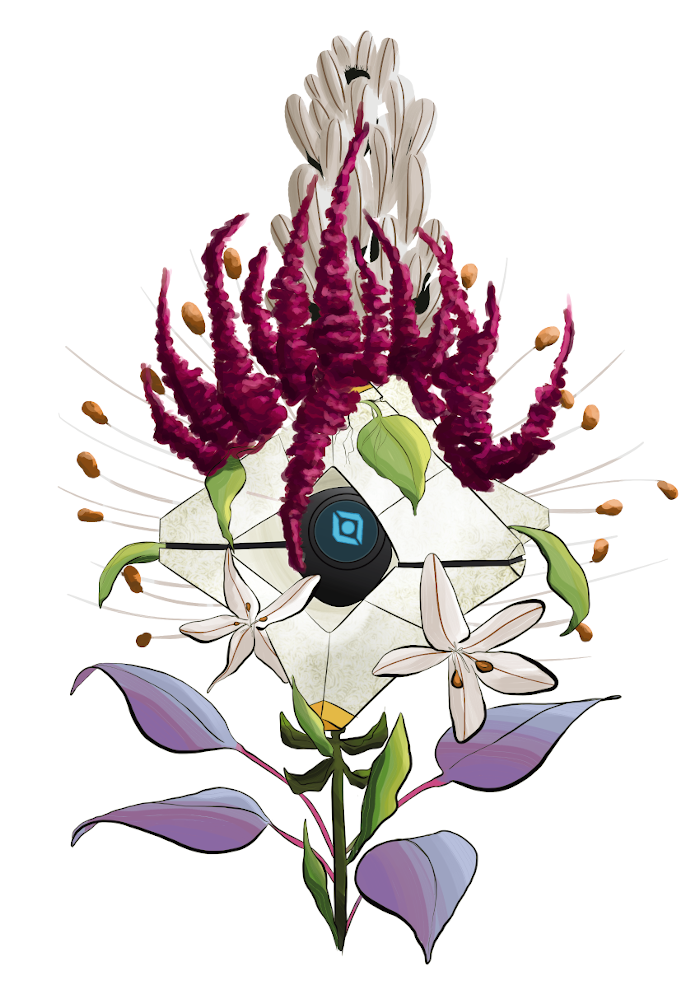 Life on Earth is stubborn. Relentless. It eats at a derelict past, at civilisations that have come and gone, often leaving nothing behind but dust and ashes. Ashes, which it feeds on, greedy and green and defiant against a universe choked by darkness and war.

You’ll find it where the ground is scorched, spiting the destruction one blade of grass at a time, and where thick vines and moss now strangle what’s left of walls that’d been meant to keep rain and wind at bay. Flowers, bright and hopeful, cover battlefields once drenched in blood. Trees shove through asphalt. Bushes, laden with fat berries, grow from the skeletons of cars, and birds nest in the barrels of long-dead war machines.

Though, sometimes, things old and forgotten bloom, too.

And, sometimes, they’re really noisy when they do.

A flock of birds takes off from the rusted roof of a car. Scattered by quick, electric guitar riffs and a staccato of sharp drum beats, they part around the small, white Ghost flitting between them. He’s the source of the music, a tune older than the bone dust in the cars below him.

He rises and falls with the beat of it. Rolls and weaves to its lyrics about a cosmic castaway, sung by some forever-ago dead man. But he never stops moving. Sometimes, he stutters and slows. Doesn’t lose his rhythm though, not once, even as his front plates twitch open and the whirr of another (and another and yet  another) scan is swallowed by the music.

Life on Earth is stubborn. Yes.

Nothing. Nada. Niks. Tidak ada. Rud a..a..ar.. b-ith? That one was probably all wrong, but yeah, nothing. He couldn’t even find the soft tickle of golden age tech to dig into anywhere. Far as he could tell, everything, everything, along the stretch of old road he’d picked for today’s round had rusted and fallen apart. What he got were bushes weaving in the wind, insects buzzing to and fro, and birds who got all offended they couldn’t out-sing his music.

Unlike him. He was a great loser, always gracious when he came up short (which didn’t happen often, really), but that was beside the point since he hadn’t lost anything. Just, ah, not found what he needed. Who he needed.

Not that that bothered him.

It didn’t. He’d swear to the Traveler’s shiny underbelly that it did. not.

Ghost jerked left, dove around a horribly bent, but miraculously still standing, lamp post, and propelled himself off the graveyard paved by asphalt and the ghosts of an age past.

He whizzed down a steep, wooded slope, crashing through lush leaves and barely skirting trunks and branches until the foliage spat him back out into the open. Right atop what’d probably once been a town. Way back when. Before it’d been... flattened. All of it. Yeah. Flattened. That seemed about the only word that aptly described what was left of it. A quick scan of his records showed it’d been host to a bitter last stand — right before being wiped off the map.

Which had happened a lot back then and truth be told he should have felt horrible about it. Instead, it stirred a spark of warm hope, because that’s where you found heroes. Someone stubborn. Like him. Someone who hadn’t given up. Someone who wouldn’t bend to what destiny put on their shoulders. Someone to share his light with. Come what may.

He slowed, dimmed his music to a mere whisper, and swept around the town’s outskirts.

First, he bounced over a stubby fence. Right into a field of wild, tall grass brushing his shell. He’d cover that first. Had to start somewhere, right? Might as well do that here, where islands of weathered concrete poked from the gently wafting green sea — and — Oh.

Not the sort that Earth had turned into, to the point where you didn’t know where one ended and another began.

The music stopped. He had manners, after all.

Ironic, he thought. How the monuments to the dead liked to outlast the vestiges of the living.

His shell twitched again, plates folding in over his eye in a frown. “Well, that’s grim. You’re turning grim, Ghost, and that’s not a good look on you.”

And then he froze.

A burst of something knocked into him. A jolt of warmth, maybe. Or a spike of electricity shocking his core so thoroughly, he couldn’t move a single joint. Try as he might. And he tried as he hung there, the sun suddenly heavy on his shell.

It’s like finding what you don't remember you lost.

Like picking up the thread to a thought you have long forgotten, and mending what’s been torn in half.

He knew what to do. Didn’t need to think. Or worry he’d get it wrong. No Ghost had ever gotten it wrong. Far as he knew, anyway.

Replaced by a gentle current, the jolt faded. He followed it, drifted along its soft pull, his shell quivering until it took him to the far edge of the graveyard, where the rusted, hollow, bulbous remains of a helicopter played host to a family of foxes.

They scattered in streaks of dirty red.

And maybe he did have nerves because it wasn’t every day you found who your light led you to. Found the end of a search so long, even he’d stopped bothering to count.

Light welled from him, first through the cracks of his shell and then parting it to make room for a steady, silvery-blue pulse. Until the Traveler’s light — his light — pulled back together what’d been torn.

Then, his shell snapped back together, he hovered there and stared.

There she was. His Guardian. Huddled against the dead helicopter. That was fine. She was probably really disoriented. He spun slightly left. She was dressed in… baggy clothes at least a size too big (so he’d gotten that wrong, no big deal)  and had tangled, long brown hair. Or maybe red. Redish. Her hands, balled into fists, pressed into the ground.

“Guardian?” he asked, dipping lower to float into her field of vision. If he’d had a stomach, that’d probably been falling through the earth at that point. That’s what excitement felt like, he’d been told.

It took a moment, but she did it.

And then she… ah… screamed.