The Case of the Ascending Angel

Spike and Xander run A.I. Sunnydale – the weird and wacky cases that walk through the door.....

This was the beginning of a new series by myself and The Lady Merlin, my co-writer. We ended up writing three stories in all but we never imported them over to AO3, so here they are. You may have read them originally over at 2Storytellerz on Livejournal.

Remember the Hardy Boys? That's where the original idea came from.

Based in Sunnydale, these are the stories of the weird and wonderful cases that Spike and Xander try to solve whilst running A.I. Sunnydale based on prompts taken from our fc_smorgasbord table below. 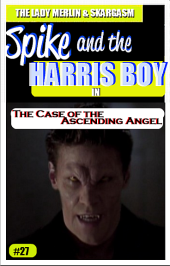 "I can't believe we haven't had more cases - Sunnydale is full of weird stuff going on. I mean, just last week, Giles lost a delivery at the Magic Box in mysterious circumstances."

"I think it might have something to do with Buffy - she's taking our cases and doing stuff for free. I think we should be asking her for more referrals."

"Pet - it's hardly complimentary that I'm down here giving you a rather spectacular blow job even if I do say so myself and you're talkin' 'bout work!" Scowling, Spike looked up at Xander.

"Errrr - yeah, it IS truly spectacular honey, it's just - well aren't you frustrated?"

"Well I am now - looks like I ain't getting a shag til we've talked." Making no secret of his dissatisfaction, Spike slithered up the bed to lie next to Xander, automatically reaching for his cigarettes as he tugged the sheets up to his waist.

"Well, apart from the vision cases we've got from Cordelia, they're hardly banging down the door are they? And have you noticed that all the cases Cordelia is sending us involve nasty, messy demons? We've spent more money on detergent taking care of her Sunnydale visions than in the last three years hanging out with Buffy!"

"Xander, focus!! You're right - we haven't had a lot of cases. I dunno - maybe we need to look at where we're advertising. Want me to beat Willie up again?"

"No, no - I think he's motivated enough from last time. And can I just say, very handy that Willie has demon in his family going back aways cos otherwise? You would have the mother of all headaches based on what you did. I didn't even know people's ankles could turn that way and not snap, and as for what you did with his ear - whoa!"

"It's a talent, luv, Angelus taught me well! This one time, Angelus, Dru and I spent a weekend with this family! I could tell you some stuff that would just turn your stomach, pet – those were the days!"

"Ugh with an additional eww! I hate it when you start reminiscing about the good old days with Angelus and Drusilla."

"I lived with the Harrises for God knows how long - don't see why I can't talk about my family. And I put up with you talking to the Cheerleader all the time"

"That's different! Cordelia calls us with work for a start, and hey, playing on the male side now - tends to mean I'm not going to be interested even if she does have nice boobs. And it's different - you're a vampire – you've already told me that vampires are interested in anything that walks!"

"You're not walking and I'm very interested in you!" Spike turned and leered hopefully at Xander.

"Oh yeah?" Suitably distracted, Xander found himself smiling at the look on Spike's face – hopeful and lustful at the same time.

"Monseigneur, all of the planets are in alignment. The portents have all come to pass, and the relevant signs are all there. Now is the time. We merely await your order to perform the first part of the ritual."

"Bastien, are you sure?"

"Very sure. We have checked and double checked."

"Then yes. It is time to release the demon."

Closing and locking the door of the hotel, Angel walked slowly down to his apartment. It had been a long, boring day with very little in the way of cases which was good because no painful visions for Cordelia; bad because it meant no money in the A.I coffers. Yawning, he headed straight to the fridge and grabbed a package of blood. Looked like otter for dinner tonight - Cordelia had taken to ordering him some exotic types of blood. He refused to say anything to her about it, but he was enjoying the surprise of what type he had today. Filling his 'I'm the Boss because She Says So' mug, he stood by the microwave and waited for that all important ting. Another yawn cracked his jaw and he stretched, enjoying the feeling of his spine realigning. It was a good job he didn't have a date with Cordelia that evening - he would be a complete wash out and she always insisted on 110% of his attention when they did go out.

He was trying to think of where to take her next - the ballet was out as it bored her rigid and he didn't think he could stand another night listening to her snore right in his ear. Actually, not true - there were some nights he was perfectly happy for her to snore right in his ear. With a smug smile, and an internal correction - never perfectly happy - Angel grabbed the mug from the microwave and sat down at the table. Life was good, life was very good. Even his irritating childe was proving helpful - being able to palm off the Sunnydale demons to Spike and Xander meant he could avoid those awkward meetings with Buffy and her soldier boy. He couldn't stand Riley and not just because of what he and his damned Initiative had done to Spike. The boy was so earnest he set Angel's teeth on edge and there was no way he even wanted to think about what Angelus would do if he ever got his hands on him. Riley was just Angelus's type - he would just love to twist and mould that earnestness into something evil....

Taking a big gulp, he stopped to consider how it tasted. Otter was ..... interesting. Another sip and he wondered if Cordelia would give him the name of her supplier because it was really good. Leaning back on his chair, he took a longer draught, enjoying the spicy taste on his tongue. This was -

"ARGH!" A sharp pain in his chest like he'd been stabbed by lightning and Angel lurched to his feet. God, what the hell was this? Maybe the otter had been spiked or something because the pain was excruciating, building and building until he could barely stay on his feet. It felt just like the last time he had lost his soul and Angelus had been released but that just wasn't possible - it made no sense at all.

Angel fell down, the mug smashing to the ground beside him and splattering otter blood all over the kitchen floor and his trousers. Clutching at his chest, he struggled to his hands and knees before another wave of pain sent him back to the floor. Biting back screams of pain, Angel began to crawl towards the living room, desperately trying to reach the phone. This couldn't be happening - there was no rhyme or reason for it, it just couldn't be happening. He needed to warn people - needed to talk to Cordelia and get her to leave L.A; he needed to talk to Spike because after Cordelia, Spike and his lover were the next 'possessions' that HE coveted. Tears streamed down his face as the pain mushroomed and he realised that he wasn't going to make it to the phone - he wasn't going to be able to warn any of them. They were all going to be in danger and there was nothing he could do about it.

"Hey Cheerleader! Xan and I were talkin' 'bout you the other night. How come all the stuff you send us is so bloody messy?"

"Spike, this is serious. It's about Angel."

"Oh don't tell me - he's run out of that flippin' hair gel he uses and needs advice as to whether super-glue will keep his hair standing over his mono-brow?"

"Angel lost his soul." All sense of humour disappearing, Spike sat up straight on his chair.

"I - look, it's not too clear, the visions never are. But what is clear is that Angel's soul has gone walkies. Wes thinks it's to do with a French prophecy, something about an ascension. One of the requirements is a formerly souled vampire - ringing any bells in the bleached emptiness that is your head?"

"You seem mighty calm about this love - thought you and Peaches were a bit closer than this."

"You don't want to know how I'm feeling right now, Spike, so don't push me. The reason for calling you is that we think Angelus is heading to Sunnydale."

"Why the hell would he be coming here? Sorry but that makes no sense luv. I woulda thought the first person he'd be headed for was you, sorry if that scares ya."

"Oh believe me, I know what he wants with me. I've heard from the leather-wearing one and he made it perfectly clear what he wants to do with me once he's sorted out a few things. I have absolutely no intention of making that possible so my location will remain a mystery to all."

"Two reasons - he mentioned something about rounding up his childe and his consort - I assume from that he means you and Xander, although we're gonna be having a chat about this consorty thing Mister!"

"Boy's not my consort." Spike's voice was sharp, the subject not something he wanted to get into. "What was the second thing?"

"This French prophecy? It involves the Hellmouth."

"When doesn't it?!" Spike sighed. "Okay, I'll get a message to the rest of 'em. How long til he's expected to hit the welcome sign?"

"We're not sure. He called me from a cell - not something we expected since Angel can barely turn a cell phone on let alone use a hands-free while driving. Why?"

"No reason - just wanted to get a rough idea of when he might hit town. Look, I better get hold of Giles and them lot - you make sure you stay safe, yeah? Boy's attached to ya - would rather nothin' happened to you."

"Oh I intend to be around to make sure that soul is shoved so far up Angel's ass he can taste it. And I want in on when we find out who's done this. Nobody messes with my boyfriend, especially when I've put in so much work to get him up to scratch. I didn't get this demon upgrade for nothing."

"'right, Pet. I'll get Rupes to give Percy a call, get their heads together and figure out this prophecy shit."

"Will do luv." Putting the phone down, Spike sat in a state of shock. Angelus was free and heading for the Hellmouth - Xander and he knew better than to complain about how quiet things were and this just proved it. Spike couldn't help but hope it was a more sane version of his Sire than the one who had escaped following Angel getting his leg over with the Slayer. That Angelus had more than one screw loose and Spike did not relish the thought of meeting him again - no doubt, there would be retribution for Spike teaming up with the Slayer in the first place, and there was the matter of a few hits with an axe he might have to pay for as well. But first off, he needed to get Xander glued to his side and warn Giles and the girls - things were about to get scarily interesting in Sunnydale.