Finn goes looking for the Stormtroopers’ lost families, and Poe tags along.

Warning: This story is about ex-Stormtroopers finding their families. It involves stolen children and themes of grief. There will be really, really sad parts. I promise it has a happy ending. 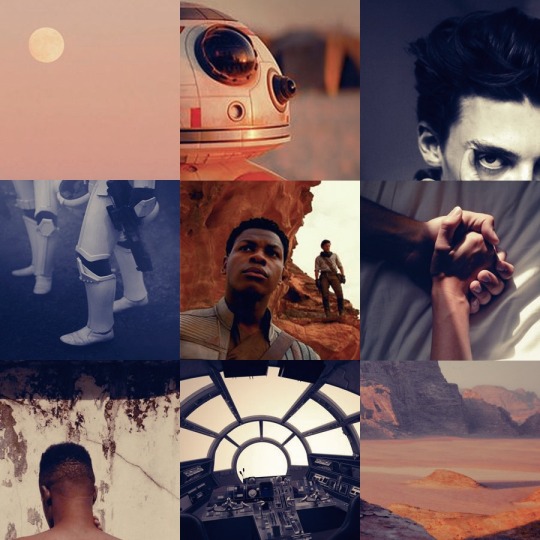 Chapter 1: The Taste of Dust

Part One: The Calling

The world keeps turning, because that’s what worlds do.

Poe Dameron wakes up the morning after the celebration with a hard-earned hangover. He stumbles after BB-8 to the Resistance headquarters, mumbling an apology for being late. Finn shoves a cup of caf under Poe’s nose, and Poe squints gratefully at him.

Poe doesn’t roll his eyes, because Finn is the god who brought him caf.

‘General,’ D’Acy says, and Poe’s back straightens automatically. He looks over his shoulder, and it hits him again.

‘Yes?’ Finn asks. He shifts slightly in front of Poe, so Poe can hide his face in his cup and act like he’s okay.

D’Acy launches into a comprehensive status report. The Final Order is destroyed, but they cannot forget the dregs of the First Order. Poe nods while Finn confers with D’Acy, guessing which warlords will rush to fill the current power vacuum. There are refugees from the war, and decisions to make about whether the Resistance will remain on Ajan Kloss. There are still a hundred worlds to rebuild and a thousand loved ones missing.

There are too many funerals to plan.

Finn is the natural leader that carries the whole Resistance on his shoulders. Poe knew he could: Poe promoted him because he knew he could. It takes a week of grief and exhaustion and struggling to keep up before Poe can start to pull his weight. He takes point on authorising missions, picking who to dispatch and filling the gaps in Finn’s knowledge. The morning he arrives early at Finn’s quarters with two cups of caf is the morning he starts thinking maybe things are going to be okay.

The way Finn smiles at him, it’s hard not to believe.

Even sharing the load, even with the Final Order defeated, it’s still more work than Poe’s ever done in his life. It’s dark before they leave headquarters at the end of each day. The evenings on Ajan Kloss are sticky and warm. Finn’s chin sometimes drops to his chest during logistics debriefs. Poe leans on him, feeling Finn get gradually heavier as he lists sideways until Poe’s gentle elbow startles him awake. Finn doesn’t shift away when it happens: he’s steadfast by Poe’s side, shoulder to Poe’s somewhat-shorter shoulder.

It’s a little too warm for an evening on Ajan Kloss, but Poe’s not going to complain.

Some nights it’s only the Generals left at headquarters, poring through reports. Poe hasn’t once regretted promoting Finn, but he’s especially glad when he has someone to hunch over a datapad with.

Until he wakes up, neck aching and mouth full of wool. He snuffles, nestling closer to the soft wall beside him. Then the wall starts squirming, because it is Finn.

Poe reluctantly peels himself away from Finn’s body, realising as he does how his legs were on Finn’s lap, and his head tucked under Finn’s chin. Too late, Poe notices the datapad sliding off his lap and clunking loudly on the floor. Finn snorts awake.

‘We didn’t finish reading the reports,’ Finn fumbles for the datapad.

Finn’s laugh shakes Poe. ‘Maybe we can get away with skimming them.’

‘Or delegate,’ Poe suggests. Finn hums in agreement. He lifts the blanket that’s been draped over both of them.

‘No...?’ Poe tugs it away. Dawn is barely peeking through the trees, and the overnight chill is already dissipating.

Finn thought Poe had tucked them in. Poe dwells on it, for as long as it takes to fold the blanket.

Poe starts to translate: ’He says it was—‘

Poe ducks his head so Finn can’t see him smiling. Finn’s binary is getting better all the time.

BB informs them it was after midnight, and that they’d better freshen up if they don’t want the rest of command to catch them cuddling.

Poe chokes and Finn coughs, so apparently Finn has also learned the binary for cuddling. Poe tucks the blanket under the bench and puts the datapad back on the desk. Finn is smoothing out the wrinkles in his pants when Poe turns to him.

‘You might wanna, uh…’ Finn trails off, hand gesturing vaguely at Poe’s chest. Poe looks down, and realises how far his shirt has fallen open. He spreads his arms.

‘What?’ he’s still half-asleep, and it’s the only reason he’s brave enough to joke: ’Too sexy for a General?’

‘How’s my dust taste?’ Finn smirks, reaching out to button the shirt himself. He straightens the chain around Poe’s neck and tucks it back out of sight.

This is a thing they do, now. Weeks of missions on the Falcon together, and at some point, ribbing banter became harmless flirting.

Well, harmless for Finn. Poe doesn’t mind the way it stings when Finn laughs it off. He loves Finn’s laugh.

It takes a full month before they wrangle a morning off. Poe’s in his X-Wing the minute he can get away. Then he’s up, laughing like a madman as he clears the jungle canopy. Surrounded by sky, he follows the lines of the clouds, chasing a flock of birds to the beach. Then he dips down into the canyon he’s only seen on the charts, almost clipping a wing on a vine as he weaves under it. BB is singing with glee and Poe sends them up, straight into the sky with his back to the ground, until the atmosphere changes colour and he sees a hint of stars. Then he’s whooping as he dives toward the sea, pulling out so close that the water kicks up around him in waves.

He lets out a breath he’s been holding for longer than he’d realised.

When he gets back to base, it doesn’t take long for Finn to find him.

A stone plummets through Poe’s stomach. Nothing like those three words to yank his head out of the clouds and nail him to the ground.

Poe slaps on a smile, because that’s not Finn’s fault. ‘Of course, buddy.’

Finn shifts from foot to foot. He rubs the back of his neck, and Poe has to stop himself from reaching out and replacing Finn’s hand from his own.

It makes sense. Leaders need professional boundaries. They can’t mix work and pleasure, and Poe must have crossed the line from a game between shipmates to something inappropriate.

Poe considers other ways this morning could have gone. He could have flown his X-Wing into the sea and never returned. ‘Oh yeah?’

‘We’re gonna spend some time together,’ Finn crinkles his nose, looking guilty. ‘If I can leave the General-ising to you a couple of mornings a week?’

‘Good, great,’ Finn claps his hands together. ‘Thank you.’

Poe shakes his head. ‘Not a problem. Not at all. I’m happy for you both.’

He’s lying through his teeth.

‘Well, spare a thought for Rey,’ Finn grins. ‘She’s the one teaching me.’

‘Buddy, don’t be ridiculous, you’re the fastest learner on the—’ Poe’s brain catches up with his mouth. ‘Teaching you what?’

‘The thing that you didn’t wanna talk about when we were dying?’ Poe confirms. ‘That thing?’

‘Yeah, that’s the one,’ Finn stares at the ground.

‘Well, I mean, if it’s a private thing between you and Rey, I totally respect—’

‘I’ve got the Force,’ Finn interrupts.

Poe opens and shuts his mouth. He frowns at Finn, then at a nearby shrub, and then back at Finn. ‘The thing you didn’t want to tell me was that you can use the Force?’

‘I don’t know!’ Finn throws his hands in the air. ‘It’s embarrassing.’

‘You think so?’ Finn gives him a little smile.

‘Come here,’ Poe pulls him into a hug. Finn’s shoulders rise, tightening, then fall as he settles into the embrace. Poe closes his eyes, breathing in the smell of him. ‘I’m so proud of you.’

‘I was thinking, maybe…’ Finn murmurs near Poe’s ear. Poe holds his breath. ‘You might want some afternoons off? In exchange?’

Poe laughs. ‘Sure, buddy. If you can handle the General-ising.’

It’s only later, when Poe’s cruising around practicing formations with Black Squadron, that he has time to be a pessimist.

Finn always comes back from Jedi training bright-eyed and glowing with sweat. He and Rey sit together at mealtimes—that’s not new, they always like sharing new food with each other—and talk Force business. Or what Poe assumes is Force business, since the Force has never had any business with him.

There are things Poe knows about Jedi, from growing up on Yavin IV. He knows Jedi weren’t allowed to love, at least in the old days. The training doesn’t seem to be something you can do as an extra-curricular activity, at least in the long term. He doesn’t want to discourage Finn, or drive a wedge between them by asking, but the thought has lodged in his mind.

There are things he knows about Jedi from the last few weeks. They’re always going off on their own after some higher calling. They’ve got abilities that are—Poe will admit to himself if nobody else—terrifying. And, the worst part: they tend to die.

But Finn is Finn, and of course he should have known. Finn is somehow more than anyone Poe has ever met. It makes sense that Finn has a power, a calling, a destiny. Poe would have told anyone: Finn is going to save the galaxy.

Poe was just his getaway pilot.