Angel Dust is a name feared throughout the nine circles, a titan of an overlord. Alastor is a budding jazz singer and burlesque artist in a high class cabaret. Charlie is the hot-headed Princess of Hell, determined to make her dreams come true and ready to fight anyone who stands in her way. Vaggie is the optimistic voice of reason, bringing a much needed light side to Charlie's PR disaster of a campaign. The one thing that unites them? A vested interest in the rehabilitation of corrupt souls.

Chapter 1: Life is a Cabaret

Angel Dust rarely frequented his own clubs. He hated the way the patrons would whisper his name and the music would stop. The way everyone watched him, gauging the kind of mood he was in that evening. The way men and women alike would fight for the opportunity to be his arm candy for the night. Sure, the first few decades after his rise to power, it had been thrilling! But the novelty had worn off and now, all he wanted was a gin fizz.

This was one of his classiest establishments- an old fashioned cabaret style establishment, where oddly enough, the most risque things that happened were naughty little burlesque shows. Even more unusual, however, had been how much money this relatively clean little club was pulling in. In the last month alone, it had outsold every strip club and jive joint in Angel Dust’s turf, so he felt an obligation to see what all the fuss was about. According to his bartender, it was all due to one little new hire, and Angel was all about fresh blood. He sat himself down at the best table in the house, giving his order to a trembling waitress as the lights went down.

Ladies and Gentlemen, guys and ghouls, demons and tempters, imps and boozers, we humbly welcome you to the Silk Stocking

A disembodied emcee with a velvet voice announced with debonair flair. Something about this place always made Angel a bit nostalgic. Perhaps that’s why he hadn’t changed it one bit when he’d….taken it off the management’s hands. He sipped his gin fizz thoughtfully, lost a little bit in memories of little Italy and smokey speakeasies he’d snuck into in his teen years.

Tonight, you’re all in for a real treat. We have Hell’s finest selection of lovely ladies, handsome heartbreakers, and budding virtuosos, all under one roof and ready to give you the time of your life. Opening for us with a jazzy little number is our very own Bayou Belle, your fan favorite, Alastor!

Great. Another one-named performer who thought they were the next Madonna because they could get a gig at the Stocking where they didn’t have to flash their genitals just to keep their job. Angel smiled into his glass. He loved breaking the spirits of a budding newbie. The curtains raised, and the limelight focused itself onto the previously shadowy figure standing center stage. Angel’s eyes widened. Yowza.

Angel Dust found himself immobilized. Those brassy vocals, coming through as though crooned through an old radio set, the way those red eyes smouldered, finding him in the crowd and locking onto his as though he’d been expected, that broad, fanged smile. The singer took a step forward, strutting forward in a way that had Angel positively breathless.

“You drove me, nearly drove me out of my head, while you never shed a tear. Remember, oh I remember all that you said; you told me love was too plebian, told me you were through with me and~”

Alastor belted the note perfectly, taking the time to flash those flirty red eyes at a few other patrons, before training them back on Angel Dust, burning him with their intensity. He strutted to the edge of the stage, stepping off of it and onto his table. Angel could see clean up his skirt, and did not fight his initial desire to look. He caught the glimpse of some see-through lacy number before his professionalism got the better of him and he looked away. The singer’s smile grew ever wider at this, and he slinked his way down to a sitting position on Angel’s table, singing the end of the song directly to him, hand cupping the mobster’s face, limelight trained on them brightly.

“Daddy, go ahead and cry me that river. Cause I cried, oh how I cried a river over you~”

The orchestra petered out, the hand on his face retreated, and all at once, the magic of the moment was broken with an uproar of applause. Shit. Well, that cleared things up for certain. If all of this little dish’s routines were like that , it was no wonder he was pulling in so much moola. Angel wondered internally if the demon didn’t have some sort of power of hypnosis, cuz he certainly had never felt anything like what he’d just experienced before. Angel waved his waitress down again, giving her a little note to slip under the new guy’s dressing room door.

Angel Dust stood outside the stage door, unwilling to admit his nervousness. The alleyway was dirty, covered in all manner of hellish filth, but that was just the norm for this end of town. Most ends of town, actually. Unable to wait in this nervousness any longer, he lit up a cigar, inhaling deeply and blowing out a few rings of smoke, letting the nicotine take the edge off of things. God, what was he? A schoolboy? A “Secret Admirer”? Get a fucking grip. He was a proprietor, scoping out his latest asset. No need to get sentimental about it.

“Neat trick.” A voice buzzed from behind him.

Angel turned, magenta eyes locking once again with glowing red ones. Hooves clicked as he stepped out of the stage door, his movements practiced and fluid and seductive in a classy sort of way that one rarely saw anymore.

“‘Stranger’, huh?” Angel chuckled, watching him pull a long, elegant cigarette holder from his purse and load a cigarette into it. Without even being asked, he lit it for him. “You really don’t know who I am, doll?”

There was a little morse blip as the demon pondered the question, wracking his memory for some secreted information as he raised the cigarette holder to his painted lips.

“Oh? You must be a politician then. Worried that if a sensitive, lovely dame like me were to know how big and bad you are, I’d run away from you.”

“Oh, I completely understand, darling.” Alastor crooned, smile turning to a smirk. “Some people just aren’t cut out for it.”

“So how did you find your calling then, sweetheart?”

“Are we talking about me, then?” Alastor’s form seemed to darken a little. “Which version do you want to hear? That I was from a rich family and taught music from an early age? That I used to sing on the streets for money? That I was beaten as a child and music was my only escape? I have a wide range of pasts for a wide range of prying gentlemen.”

“I wanna hear the truth.” Angel said, looking the singer up and down. He looked cold. Or maybe just...uncomfortable. “But ya ain’t gotta share it right away. I know it ain’t easy.”

“How considerate of you.” Alastor said with very convincing false sincerity. “I’ll tell you this much: I’m from Louisiana and I could sing before I could talk. My only friend growing up was the radio. I’ve only recently returned to the stage. Your turn.”

“My turn, huh?” Angel smiled. “Alright, a little tit for tat is only fair I s’ppose. The name’s Angel Dust. I own most of this district, including your little club. I worked my way up to overlord from the very bottom and honestly? It’s boring as fuck at the top. I came here tonight to see why the Stocking had jumped to my number one moneymaker and got the surprise of my life when the answer was a saucy little cocktease of a deer who won’t show more than a little ankle.”

Alastor laughed out loud. A genuine sound, accompanied by a disembodied laugh track that made Angel equal parts intrigued and uncomfortable. When his head snapped back towards him, a sultry look had made its way back to Alastor’s face. One that sent a thrill straight through Angel’s spine, settling in his crotch.

“Come now, Angel Dust. You got to see a lot more than ankle tonight. Or were you not paying close enough attention?” Alastor’s hand reached for the hem of his skirt, pulling the tea-length evening gown just a little above his knee in a teasing manner, letting his thigh peek through the slit. “I could do it again, if you’d like?”

“That’s alright, toots. You ain’t at work no more, and ‘sides. I got a pretty good look earlier. Tease.”

“You don’t sound very happy about that.” Angel observed, taking another puff off his cigar.

“Perhaps I’m not, but it doesn’t really matter what I think. That’s just showbiz.”

“Why do this shit to yourself if you hate it so much?” 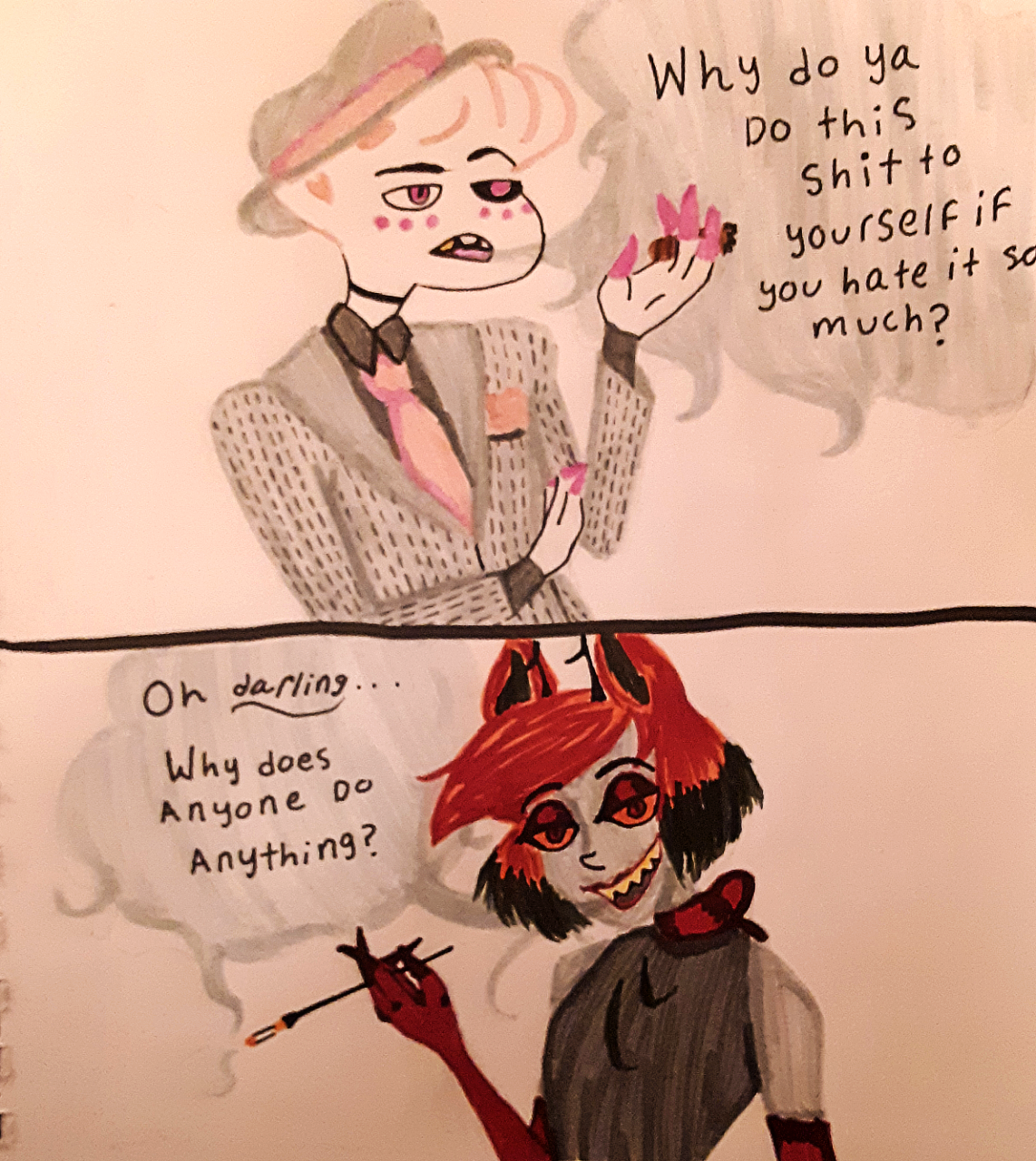 “Oh darling ….” Alastor chuckled hollowly “Why does anybody do anything? The paycheck is fat, and the drinks are free. I do so love a good campari. Not everyone is lucky enough to have the moon on a silver string.”

Something in the way Alastor’s arms crossed a little tighter, almost as though comforting himself, made Angel’s heart ache. Even so, he felt he could watch this divine creature for the rest of eternity, caught helplessly in the magnetism of his old-fashioned way of speech and his well rehearsed mannerisms. It was like everything Alastor did was a performance, and Angel couldn’t tear his eyes away for even a second. He wanted to know what was underneath the act- who Alastor was behind the sequins and the smoke. And that was immensely dangerous for someone like him; to jeopardize everything for a bit of skirt that had caught his eye. But maybe...maybe that’s what he was missing. The danger. With a charming grin, he reached into his pocket and withdrew a card, slipping it into the singer’s hand.

“Well, if ya ever want to know what it’s like to have the moon on a silver string, or heck, even just a little campari, you can find me here, doll.”

“A calling card? How quaint. If I didn’t know better, Angel Dust, I’d say you were enamoured of me.” Alastor smiled wider, tucking the slip of paper into the top of his dress. “Now, this has been a lovely smoke break, but I really must get back to work. The stripteases and fan dances won’t perform themselves.”

“Break a leg.” Angel called after him as he watched that little deer tail vanish behind the stage door.