what business does daryl dixon have being on snapchat? none, that's what. so it isn't beth's fault, really.

it would feel wrong to write any babysitter!beth stuff and not tell you to go to gutsforgarters stories because they are far superior. 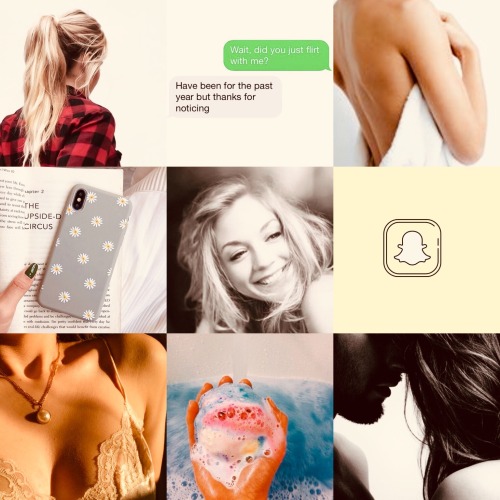 Here’s where it goes wrong―

Even though, it’s innocent on his part.

Carl takes his phone and downloads the app. He sets up Daryl’s account. He adds everyone he thinks Daryl should add―and apparently Beth is one of those people. Which she doesn't mind at the time.

Carl tells Beth about Daryl’s progress on understanding the app after school each day. Beth never asks but she always listens and nods along.

The first picture Daryl sends her is of Maggie at the bar. She grins at her sister throwing back a shot of something brown-coloured. Beth is at Rick’s minding the kids while everyone else is out for Glenn’s birthday. She's not twenty one yet, Maggie tells her (constantly).

Beth sends a picture of Judith asleep in her crib with the caption ‘Bad influence!’.

Daryl opens it and doesn’t reply. Beth shrugs it off and goes downstairs to watch a cartoon with Carl.

She learns that when an animated penis starts dancing.

Beth's eyes widen comically. She tries to keep her focus on her phone instead of the weird TV show.

After an hour or so, she’s hooked. Her once innocent eyes are glued to the unfolding drama of quarreling friendships and growing pains―and so many dick jokes. Especially the episode where Missy thinks her boobs are too small compared to the other girls.

(It’s super accurate at representation of this all too common female insecurity.)

This is the start of It.

“What are you guys watching?” Rick is slurring his words, but his eyes are wide and surprised.

“Uh…” Beth blushes. She feels the heat of Daryl’s gaze on her neck. She remembers thinking that she must look like some sort of sex fiend―which becomes too freaking true later.

“It’s the show Brandon said I should watch, remember, Dad?” Carl leans over the back of the couch.

“Maybe we shouldn’t take Brandon’s advice anymore,” he mutters before wobbling his way to the bathroom under the stairs.

“Alright,” Beth peers sheepishly in Daryl's direction. She really does not want to be left alone with him because she cannot even begin to explain the amount of singing penis's he just saw her watch. She turns to Carl. “You need help?”

“Night,” Beth chirps to him as he climbs the stairs.

It becomes so silent Beth’s not sure if Daryl is even there. She sucks in her cheeks and looks behind her. Daryl is leaning against the living room wall. Tiny pieces of his hair fall into his face. The left side of his shirt has shuffled up his abdomen. Beth’s eyes find the patch of exposed flesh. She quickly moves her eyes to stare down at the couch. God, maybe she is a pervert.

Daryl turns his head to her. Beth bites her lip and sneaks a glance at him. His eyes are droopy and hooded from the alcohol. His shoulders are relaxed. He sniffs a breath through his nose and Beth smiles.

“Fine,” he mutters, rubbing his stubbled chin with his left hand. “Was tryna answer you. Had no bars.”

Why would Daryl Dixon feel the need to tell her that?

The sound of a toilet flushing, a tap turning on then off, followed by Rick stumbling out of the bathroom.

“No problem,” Beth smiles at him kindly.

“How you getting home?”

“Oh, I’m sleeping on the couch,” Beth picks up her pillow and wiggles it in the air. Daryl nods.

Beth expects him to leave, but he doesn’t.

“Um, do you want some tea or something?”

“Sure,” Daryl pushes himself away from the wall and walks into the kitchen. Beth stands up and follows him. It’s quiet and slightly cold so she’d be making tea for herself anyway, but―why is Daryl Dixon lingering around after Rick’s gone to bed?

Beth’s never been alone with Daryl before, not on purpose anyway, and certainly not when talking is expected.

She clicks the snip on the kettle and grabs two mugs from the cupboard. Daryl leans against the kitchen island. Beth studies him for a moment. He seems…at ease. She’s not sure what’s going on at all.

“Carl got you into Snapchat, huh?”

“Mmm,” Daryl crosses his big arms over his chest. “Wanted to send me pictures of a girl he liked.”

“Wanted advice or something.”

Beth breathes a laugh. She shakes her head.

“I didn’t mean it like that,” Beth mutters, her eyes cast to the ground instead of his face.

“He thought I―uh,” Daryl’s cheeks tint pink. Beth raises her eyebrows, eager to know. Daryl sighs. “Had a way with the ladies.”

The kettle clicks. Beth turns to pour water into their mugs.

"Nah," she finds herself saying. "I bet you're a real heartbreaker."

Beth hands him his mug. Daryl's looking at her funny as he accepts it. She clears her throat and looks away.

He smiles. Beth shakes her head. She is, of course, talking about his motorbike.

Beth nods and sips her tea. She has no idea what that means.

"Well, I better go to bed," Beth grips her tea and shuffles around Daryl. "Or, to couch, I guess."

Beth takes long steps toward the couch. She looks back to see Daryl standing calmly and drinking his tea.

She sighs in relief as soon as her butt hits the couch cushion. She can hide here until he's gone.

Though she hadn't known it then, Beth had made many mistakes that night. All of which help lead up to It.

The next time she sees Daryl, he greets her.

Daryl Dixon says hello to her as if it were a normal occurrence.

"You're in a good mood," he comments.

"You just said something coherent at 7am," Rick teases.

Daryl rolls his eyes. Beth wiggles her toes. She's sitting on a stool in Michonne's kitchen. They're chatting about organising a couple getaway. Beth's going to have the pleasure of babysitting while they're away. Which she doesn't mind at all. Both Rick and Michonne are nothing short of wonderful to her.

Daryl doesn't say anything else to her that day. Beth purposefully doesn't look at him. She's afraid she'll turn bright red.

She gets a Snapchat from him on the way home. Her finger hovers over it before she taps it. It's a picture of Michonne and Rick kissing. The caption reads 'Come back'.

She sends a picture of the dashboard with the caption 'Haha! You're on your own'.

The reply is almost instant. It's a picture of a beer with Daryl's huge hand clasped around it. The caption is a love heart and a thumbs up emoji.

Her Dad asks her what she's smiling at.

It's the third time Daryl snapchats her that It happens.

She's snapchatting with Zach. He's the kind of pretty girls flock over. Beth is always so flustered and nervous when he texts her. She feels lucky somehow.

Beth: in towel :p ur distracting me!

She thinks this is cute but―

Beth takes a selfie with her tongue out.

Beth clicks a picture of her posing with a rubber duck.

Zach: lol not what i meant

Zach: come on beth ur so pretty!

Beth flushes. She looks down at the towel around her body. Oh.

She doesn't know why she does it. (Hormones, she guesses. Stupidity, maybe.) But she takes a picture of her bare shoulders and pulls the towel down a little to show the curve of her breasts.

Beth bites her lip. She pulls the towel down a tiny bit lower and takes a picture. She sends it to Zach.

Beth gulps and lets the towel fall. She looks at her chest in the bathroom mirror. She wonders if her breasts are attractive. She thinks back to that Big Mouth episode. Beth takes a deep breath and shakes her head.

She double taps Zach's name. Beth angles the camera. She snaps the picture before she can overthink it. She hits send and puts her hands over her face. Letting out a giggle of excitement, she pulls her towel back up.

Zach replies. Beth taps it open. It's a picture of his bed with the caption 'You did what?' Beth furrows her eyebrows.

That's when she realised she had done It.

She had sent a picture of her bare breasts to Daryl Dixon.