Kakashi waits for Iruka to return from a mission.

Next entry in the KakaIru Mini Bingo. I'm not likely to publish anything new until next week because y'know Christmas but we'll see. 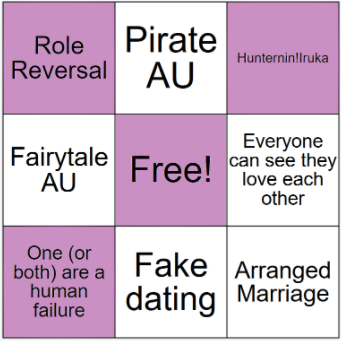 Kakashi sat on the small battered couch, to the casual observer he looked as bored as he ever did his usual reading material propped open in front of his face. To someone who was more than just a casual observer however they would have seen the tension in his hands and the way his eyes kept darting toward the door to the apartment.

The Jounin kept up the façade for a few more silent moments and then sighed, placing the lurid coloured book down on the depressingly uncluttered coffee table.

He had considered himself a patient man, he had built up a long and illustrious mission record that certainly proved it but at the precise moment his patience was frayed into a million separate strands.

And it was driving him to complete distraction.

The Chūnin had been sent on a diplomatic mission to Suna, Kakashi vaguely recollected Iruka bouncing excitedly and something about integrating Konoha's academy practices into Suna's curriculum* and while he lo… cared deeply for the other man there was only so much of the brunette's enthusiasm he could stand at any one moment. He was a little embarrassed to say he'd tuned out the rest of the conversation.

But then Iruka had just upped and left and it had been two months and then some since the copy-nin had seen the other man and his presence had been sorely missed.

He momentarily wondered if the brunette felt like this when he was away on missions and felt guilt grip his stomach like a vice. Did Iruka ever pace and fret and panic when Kakashi was more than an hour later on his deadline, did the Chūnin have vivid images of him lying in a ditch somewhere? It made him feel sick to his stomach.

He took a deep, steady breath and willed his overactive imagination to 'chill the fuck out already.' Iruka was fine, of course he was fine, he might only be a Chūnin but he was a more than capable shinobi, he was wily, intelligent and most importantly stubborn as fuck. He wouldn't let anything stop him getting home. Plus it was only a diplomatic mission, not something dangerous or covert. Iruka was fine Kakashi knew he was just being a bit melodramatic as he'd never been the one in this position before. It was usually him out on the missions and not the one left behind.

It made him feel useless.

He heaved out another sigh, Kakashi hated feeling useless.

But right now there was literally nothing he could do but wait for the brunette to return. His gaze slid back to the book on the coffee table and Kakashi felt himself frown, it felt wrong to see it just lying there. If Iruka had been here it would have already been thrown at his head, or in the bin, or out of the window.

Kami he missed the Chūnin.

He missed the way the brunette wouldn't take any shit from him, would call him out if he was being an asshole and in the same breath make him feel like a human being. Iruka had drawn him out of his aloof shell and forced him to be a person again as much as he hadn't wanted too.

And in his absence Kakashi had fallen back into old habits, becoming pretty much a hermit. He could already picture the sad, exasperated look on Iruka’s face and the accompanying eye roll.

Kami, when did I become so pathetically dependant?

He chuckled sarcastically, running a hand through his wild hair. Who would have thought that all it would take to destroy the façade of the legendary copy-ninja was a Chūnin with a loud mouth, terrible temper and the biggest heart Kakashi had ever encountered. (Not that he'd ever told Iruka any of this)

And now he's back to square one, the worry bubbling under his skin like acid.

And yet, Kakashi doesn't think he'd give it up for a second.

He's drawn from his thoughts as the door knob tentatively turns and the door swings inwards. Feels his heart catch in his throat as a familiar figure walks through garbed in a Suna desert cloak and goggles looking like he'd spent a week buried in Gaara's sand coffin.

Chuckles at the aggrieved tone to Iruka's voice and before Kakashi even knew what he was doing he was crossing the room and drawing the Chūnin into a tight bear-hug not caring one fucking bit that he was getting sand literally everywhere. (He knew Iruka would mind momentarily but he was hoping that he could sufficiently distract him before he noticed.)

The brunette pushed himself back and lifted the goggles from his eyes, Kakashi could see the surprise in his face and realised he might have come on a bit strong. Well strong for him anyway.

He let go and stepped back a little sheepishly, rubbing the back of his neck.

Iruka rolled his eyes and shucked off the heavy cloak sending another small wave of sand across the previously pristine floor. He motioned Kakashi forward and the Jounin hesitated for just a second.

"Come here idiot, I missed you too." He said bluntly and Kakashi found his feet moving forward of their own accord.

It sometimes frightened him how well Iruka could read him, he guessed working with children of all shapes, sizes and ages would do that for you.

The brunette drew him back into the hug and buried his face into Kakashi's shoulder.

Iruka made a small noise of contentment, the tension in his body seeming to melt away in an instant. He hung loosely off the Jounin, caught up in the embrace.

Kakashi smiled behind his mask, a warm feeling worming its way through his chest.

Home… I can live with that.

* This is referenced early in Shippuden.

Hope you enjoyed. Have a lovely holiday week. 💓