5 Ways To Ruin A Turkey

5 times Uther didn't get turkey for Christmas and 1 time he did.

I got the cutest prompts for this.
All my favourite tropes that I mushed into a 5+1 fic, cos who doesn't like those?
Fluff, Smut, Friends to Lovers, Fake Relationship and turkeys.

dhampir1508, I hope you enjoy this little offering of mine. Merry Christmas!

Chapter 1: The Christmas They Met 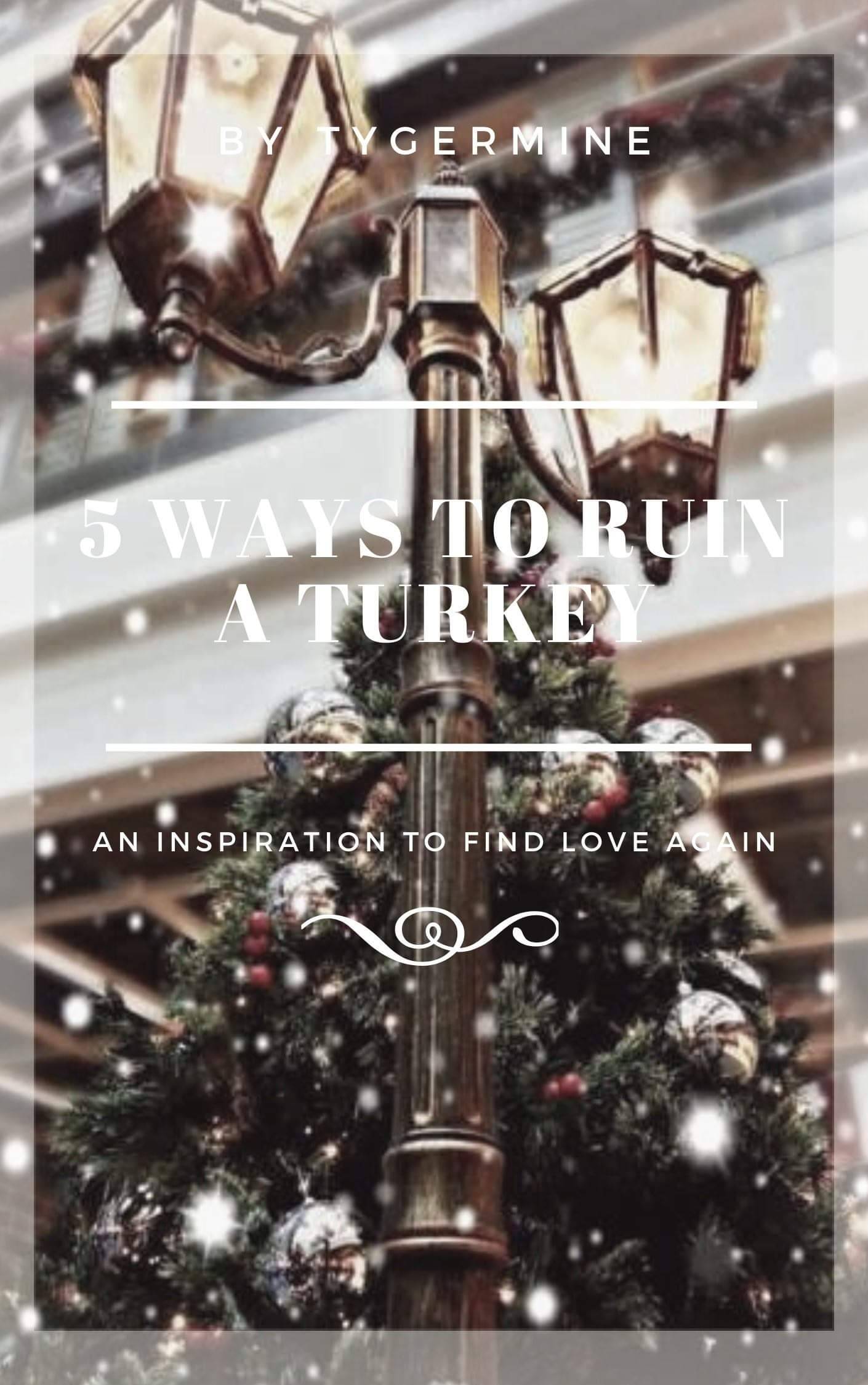 A Christmas Turkey by Nigella Lawson

“Put the water into your largest cooking pot or a bucket or plastic bin. Squeeze the juice from the orange quarters into the water before you chuck the husks in, then add all the other ingredients, stirring to combine the salt, sugar, syrup and runny honey.”

Uther stood in the kitchen staring down at the bird soaking in a plastic bucket of brine. It didn’t seem natural to almost pickle a bird, but what Nigella instructed, Uther did, as though her words were gospel.

Arthur sauntered into the kitchen to grab another bottle of wine from the fridge.

“I don’t think the turkey will get into the oven by the mere force of your will, father.”

“Nobody likes a smart arse,” Uther replied distractedly as he reread the instructions he’d printed off the internet. He glanced at his son. “Don’t get drunk until after our guests have arrived.”

“Guests? We never have guests for Christmas. Got a new girlfriend?”

Uther rolled his eyes in a way Arthur had not often seen in his life. His father was certainly becoming more fun the older he got. “It’s not a new girlfriend, but I am reconsidering it. Maybe she’ll treat your trust fund better than you do.”

“Oh ouch.” It was an old joke between them ever since Arthur took his first payout, invested in a start-up that exploded and now Arthur’s trust fund was merely pin money compared to what the start-up was making. “So, who is so important that you’re having a stare-off with a turkey instead of just ordering from Taj Mahal like we always do?”

“Well, since you were nice enough to set up a Facebook account for your old man, I got in contact with some old friends. I have invited some of them to dinner. They should be here soon, so please, spare the Chablis until they arrive.”

As if cued in a movie, the doorbell rang from the other side of the house.

“Be a good son and get that for me? Leave your glass here, Dean Martin.”

Arthur gave his father a mock salute and headed towards the front door, bypassing the living room where he hoped Morgana and Gwaine had detached themselves from each other and were ensuring all their buttons were buttoned.

He pulled the heavy walnut door open and plastered a smile on his face.

He shut the door on the carolers’ faces. He hated carolers and this lot had the gumption to dress up as if they were waiting for the Tardis to take them to Dicken’s London.

He returned to the kitchen and grabbed his glass. “Wasn’t them.”

Uther nodded as he muttered the instructions and wearily eyed the baking dish, comparing it to the size of the turkey in the bucket. “Surely it will fit.”

Arthur decided to take his glass with him and returned to the front door.

There were three people on his doorstep. He waited a few moments to see if they were going to break out into song. Instead, the younger man shuffled and rubbed at his nose with his mittened hand. The older man frowned and the woman who was with them smiled widely.

“Arthur? Did your father tell you we were coming?”

“You must be his Facebook friends. Please, do come in.” He ignored the way the young man snorted in amusement.

Once inside, coats on the rack, bags in the cupboard, Arthur led them to the living room, speaking loudly to alert Morgana that the guests had arrived. To her credit, Morgana had moved to the bar and was pouring glasses of mulled wine while Gwaine had disappeared. Hopefully to the kitchen to help Uther.

Arthur ushered the guests to the sofa. The young man sat down, jerked slightly, dug behind him and pulled a bright blue bra from between the cushions. He caught Morgana’s eye and shared a wink with her before subtly returning it to its hiding spot. Arthur felt himself blush furiously.

He quickly handed out the drinks and went to stand closer to the fireplace as if to explain his red cheeks.

The woman spoke up. “Hunith Emrys and this is my brother-in-law, Gaius and my son, Merlin.”

“So,” Morgana took a wingback chair on Hunith’s side of the sofa. “How do you know my father?”

“Ygraine, actually. We were at university together.”

Morgana and Arthur froze. Uther had never really talked about Ygraine, only the occasional tidbit that they kept close to their hearts. Things like poppies being Ygraine’s favourite flower, or that she really liked Kate Bush. Here sat someone that knew her and hopefully, she’d share what she knew.

“I’ll have you know, Nigella is never wrong!”

There was a clang and a bang and Uther was suddenly in the living room.

“Hunith! What a pleasure to see you! Thank you for coming.” They hugged in a way that made the younger guests suspicious. That wasn’t how you hugged an old friend, was it? Arthur certainly never hugged his friends like that.

Uther shook Gaius’ hand and they shared a joke before Gaius excused himself to the kitchen to see if he could help. Merlin leaned over to Morgana, shared a quick whispered conversation before they both disappeared into the kitchen. Arthur felt abandoned and decided to join the party in the kitchen.

Gwaine and Gaius were whispering over the turkey when he stepped through the door.

“I told him it should have gone in about an hour ago, but he was insistent that the instructions allowed for two and a half hours. At this rate, we’ll only eat at nine.” Gwaine was explaining to Gaius.

“We could always microwave it? Has he at least turned the oven on to preheat?”

They glanced at the oven, which simply blinked back with the wrong time on its display.

Arthur left them to it and went out into the conservatory just off the kitchen.  Morgana and Merlin were sitting in the far corner, heads bent close and sharing a cigarette as if they were teenagers, which Arthur strongly suspected Merlin was.

“I thought you’d quit,” he said looking pointedly at the cigarette in Morgana’s fingers.

“Tis the season and all that. I’ll make it my New Years resolution.” She smirked at him. “Arthur, did you know Merlin is also a Chelsea fan. You two can commiserate together on that.”

With a final drag of the cigarette, she handed it to Merlin and left to help in the kitchen.

A lengthy silence stretched between them. Merlin coughed and put out the cigarette.

“From the way my mom was talking, I thought this would be a lot more...Downton Abbey.”

“My father gives the staff leave over the holidays.”

“Has he ever made a turkey before?”

“No. We usually just get a curry, but I think he wants to impress your mum.”

“Look,” Merlin stood up. “I have my own Christmas traditions, I’m just indulging mum because I’ve been away for a while, but I always watch Die Hard on Christmas eve. So, do you have a quiet corner I can go hide for a while where I won’t be missed?”

“We’re not such bad company, are we?”

“No. I just… I’m going to sound like a wanker, but I literally just got off a plane and I just need an hour or so to get my head together before I’ll be good company.”

“I know just the place.”

They ended up ordering Indian anyway and ate the turkey on Boxing Day.