The kriffing idiot had vanished. Not even a body to mourn.

And while Han Solo’s entire stash of Corellian whiskey couldn’t drown out the memories of that night on Exegol, perhaps it was the reason for the strange voices Rey was beginning to hear. Whispers of a promise she’d heard in a dream – or a nightmare – a long time ago.

"I’ll come back for you, sweetheart."

Sand pricked at Rey's calves as the wind whipped it past, whirling and spraying like a thousand tiny stinging insects. Then all at once the miniature sand spout seemed to tire of her and tore off in another direction.

She looked down at the little droid at her feet. Poor BB-8 was not particularly fond of sand.

Rey had meant to be back with the Resistance by now. She'd wanted to go back to Ajan Kloss after paying her respects to her masters. But she hadn't left yet. The truth was, Rey was not ready to see her friends again. Not yet. Their smiling faces, their talk of plans, their selfless work to continue freeing each and every system of tyranny, of attempting to reinstate some kind of democratic government. It was too much. They were celebrating, they were doing good things, and she longed to feel a part of it. But something tore at her insides.

Rey sat heavily onto a stool at the filthy table. Everything was covered in thirty years of dirt but she couldn't bring herself to care.

The droid gave a low whine.

BB-8 was right. She did have a lot to celebrate. She had done it, hadn't she? She was a Jedi. She'd stood with Ben and defeated the Sith.

Her throat tightened and she forced a swallow.

The gaping wound in her soul. The cause of the pain that would not let her sleep. Eat. Live.

She was weak. And she gave in to the memory.

She wished her vision had been clearer then, that she had memorized his wonderous smile in more detail. Even so, the way his eyes shone with hope, with love and the tender way he'd cradled her in his lap. She'd thrown herself into that kiss with everything she had.

And now, allowing herself to think of the way his lips had felt against hers was the most painful pleasure she could imagine. He was so soft, sweet as he'd responded to her and she wished she'd made it last longer. But they'd pulled away to simply stare at one another. If their kiss had been fuel for a lifetime of dreams, then the smile he offered her next had been torturous perfection. As wretched and colorless as Exegol was, Ben Solo's smile lit the entire space. It filled the empty hole in her heart she'd been trying to fill since Jakku.

And then, he'd just collapsed.

A sob came from nowhere to rack her body. Tears burned hotter than the desert sand as she grabbed the empty cup she'd brought in from the falcon, slammed it down on the table, and poured a glass of Corellian whiskey.

Damn it if that hadn't been Han Solo's bottle she'd found in the Falcon's galley and damned if she wasn't going to drink the whole thing to drown out the memory of Han Solo's son.

She relished the fire that flooded her throat as she took the first swig, eyes watering as it continued to burn all the way down to her stomach.

The kriffing idiot had vanished. Become one with the Force and completely disappeared.

Not even a body to mourn.

Rey downed the last few gulps of the whiskey and pushed herself away from the table, heading to the small pack she'd brought inside from the Falcon earlier and dropped onto a lounge chair. She pulled out the other bottle of whiskey, setting it aside for now and dug deeper into the pack.

She tugged slowly at the fabric she'd tucked carefully into the bottom of the bag, then unfolded it. The thing was huge. She could have fit two of herself in the enormous black shirt and she wondered what Ben would say if he could see her in it. Maybe he'd smile, laugh even. The image it brought to her mind tugged at one corner of her lip.

It was the first time she'd felt like smiling since coming to Tatooine.

Maybe the whiskey was helping after all.

She held the shirt up one more time, trying her best not to think about what had caused the massive hole in the garment's front, and slipped it on over her head. She swayed as a familiar scent wafted over her from the fabric. Something earthy, definitely sweaty, and laced with a delicate soapy smell. She couldn't liken the scent to anything but him. And the memory of their kiss threatened again.

Oh Force, how could she possibly live like this?

She gathered the excess material in her hands, sat down on a dusty old armchair, and cried into the only piece of Ben Solo she had.

She stayed in that chair, knees curled into her chest, clutching that sacred fabric until she felt as though she had no more tears left. BB-8 had long since rolled to the corner to power down when something familiar tugged at the edge of her consciousness.

She was standing straight in a heartbeat, still gripping Ben's shirt in her hand, listening for… something.

Another tug. She knew this feeling.

She spoke his name to the empty room. "Ben."

Her heart ached, a deep writhing pain when she was met with only silence.

She climbed the stairs to the outer atrium at the center of the homestead, then trudged up the hill to where the desert sand lay flat against the starry night sky. Rey looked out at those stars, tracing the swirling galaxies over and over again with her eyes.

The wind picked up, sending stray hairs tickling across her face with the breeze.

She wasn't even sure she'd heard anything, but could it be…

"Ben?" Her response was more of a croak thanks to all the crying she'd done.

"Ben!" This time her voice rang out strong, getting lost eventually in the expanse of the Tatooine night.

She'd almost convinced herself she hadn't heard it when the voice came again.

I'll come back for you, sweetheart.

But the bond, that open wound that had been left so raw since Ben had disappeared, had been suddenly right again. She'd felt connected once more, there was no mistaking that. And now, she was bleeding again from the emptiness of losing him.

What then had changed?

Rey collapsed onto her knees in the sand and looked up at the whirling patterns of stars far above.

Nothing. Nothing had changed. 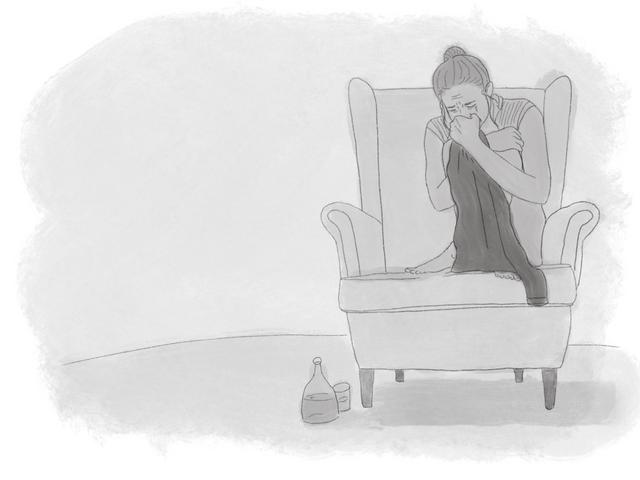 I want to thank the amazing JenniferLadyBug on Tumblr for these two beautiful illustrations! And surprise, there's one for each chapter for the first several chapters!

I told myself I would absolutely not be doing this, I cannot start another Reylo fanfiction. But then, JJ went and did this to my babies and well... here we are. Let me know what you think!