Kakashi asks Iruka for a favour at 11:30 in the evening. He is not best pleased.

Written for the KakaIru mini bingo 2019.

Prompt: One (or both) are human failures.

Which I interpreted as they are both assholes to each other but in a lovable way.

EDIT: Just adding a few words so I reach the 1000 word limit for the challenge (I'm dumb I didn't know there was a min word count) 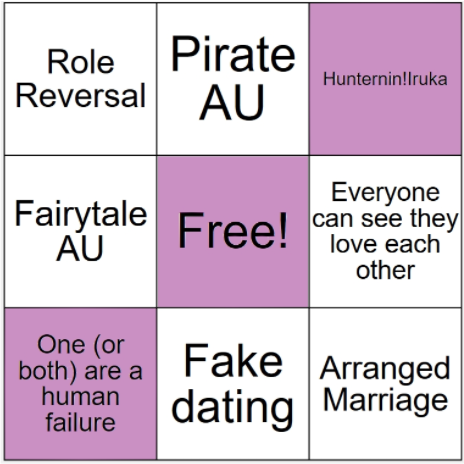 Iruka sighed and placed the book he'd been reading in bed down against his chest, rubbing the bridge of his nose. He knew that tone of voice and it usually meant he was about to be very annoyed about something.

"Ru, please, please don't kill me but I really need you to do something for me."

Yup, definitely about to be annoyed.

"Kashi it's eleven thirty in the evening and I've been awake since five a.m. in the fucking morning. I've just had the literal day from hell in work which I have to be back at in eight hours and you want me to do something?"

There was a moment of sheepish silence.

"I need you to wrap presents for my work colleagues."

The brunette closed his eyes and silently counted back from ten.

"Are you for fucking real?" He shouted down the hall.

"I know, I'm sorry, I completely forgot and tomorrow is my last day before the Christmas break." Kakashi's voice was pleading, almost pathetic.

"How, exactly is this my problem?" Iruka retorted, already completely done with this shit.

Kakashi walked into the bedroom and started stripping off his work gear before pulling on a comfortable wife beater and night pants. He shot a hopeful smile at the man laying on the bed before lying down next to the brunette.

"You know exactly why. I can't wrap or don't you remember last year?"

Iruka visibly winced at the memory of Kakashi's attempts at wrapping last Christmas, he still had nightmares about the glitter and the less said about ribbons the better. But he wasn't about to admit defeat that easily, he shot an unamused glare at the silver-haired man.

"Well in my defence I have been telling you to wrap presents for weeks."

"Oh no, fuck no I get that I still haven't had chance yet to start the wrapping but that doesn't mean I should do the wrapping for presents you bought for your workmates." Iruka snapped, glaring at the other man.

He'd been so busy with work and caring for Naruto and so many other things that he'd just hadn't had chance. Iruka knew he'd just have to get on with it soon, Christmas was fast approaching after all but he was not going to let Kakashi manipulate him using that.

"You're an absolute asshole you know that."

Kakashi's face fell a little and he stuck out his lip in a pout.

"Please Ru… I need your help."

And with that uttered plea Iruka folded with an exasperated sigh.

He knew Kakashi had been struggling to find his place, the new job had been a big change for him and he'd always found it hard to make friends. The fact that he'd found some and was willing to actually go to the trouble to buy them gifts was really telling. He sighed and climbed out of bed, pulling on something a little warmer to ward off the chill of the cold winter night.

"You're still a fucking asshole Hatake."

Kakashi smiled completely unapologetic and Iruka couldn't help but feel he'd been played to perfection by the other man.

He descended the stairs and grabbed the gifts from the disaster that was their dining room table (all Naruto, he apparently didn't understand that not every surface needed to be covered with something. The drawings were cute though). The brunette fucking hated wrapping gifts, it was his one true nemesis of the Christmas season but Kakashi was right, he couldn't wrap for shit. Even when just helping under Iruka's supervision he was a literal disaster, he merely had to touch wrapping paper and it seemed to spontaneously combust into brightly coloured confetti. Iruka sighed, grabbing the rest of the wrapping paraphernalia when a roll of wrapping paper caught his eye.

Grinning slightly maniacally he grabbed it and set to work.

Fifteen minutes later the brunette traipsed back up the stairs and clambered back into bed. The silver-haired man immediately accosted him dragging him into a warm embrace and nuzzling into the brunette's shoulder.

"Thanks Ru…." He murmured sleepily.

In the darkness Iruka smirked. "No problem…"

Kakashi stared at the luridly wrapped gifts and then at his lover who was failing terribly at getting Naruto to put on his coat so they could leave. He could see the smug as fuck smirk on the brunette's face and Kakashi didn't know whether to punch the brunette or kiss him.

"What? You asked me to wrap them, I wrapped them. You didn't exactly specify what you wanted them to be wrapped in." Iruka's voice was disgustingly innocent, Kakashi wasn't fooled one bit.

"Disney Princess paper, really?! Why the hell is that even in this house?"

Kakashi pinched the bridge of his nose feeling a migraine coming on.

"I hate you so much right now."

The brunette laughed lightly and punched him in the shoulder.

"Stop being melodramatic, you do not. Also from everything you've told me about them Genma and Yamato would find it funny and Gai would just think it was you being 'hip'."

Iruka laughed harder, ushering Naruto out of the door and out toward their clapped out banger of a car.

"We're not even married dumbass."

Kakashi took another disgusted look at the pile of pink papered presents and then sighed shoving them into a bag. He shut the door behind him and locked it before jumping into the drivers seat. Iruka finished wrestling Naruto into his car seat and joined him on the passengers side.

"You are such an asshole Iruka."

"Takes one to know one."

Kakashi couldn't disagree with him and slammed the car into gear and pulled away.

Hopefully the guys wouldn't laugh at him too much .

Uh.. so truth time. This story is 90% true... I've literally just written this in an hour after this actually happened and my plot bunny just bit me.

Not gonna lie I was fucking tempted to wrap them in Disney Princess paper and yes my boyfriend is REALLY that terrible at wrapping presents.

Love all you guys.