Draco gives Hermione a gift because of an instructional YouTube video. 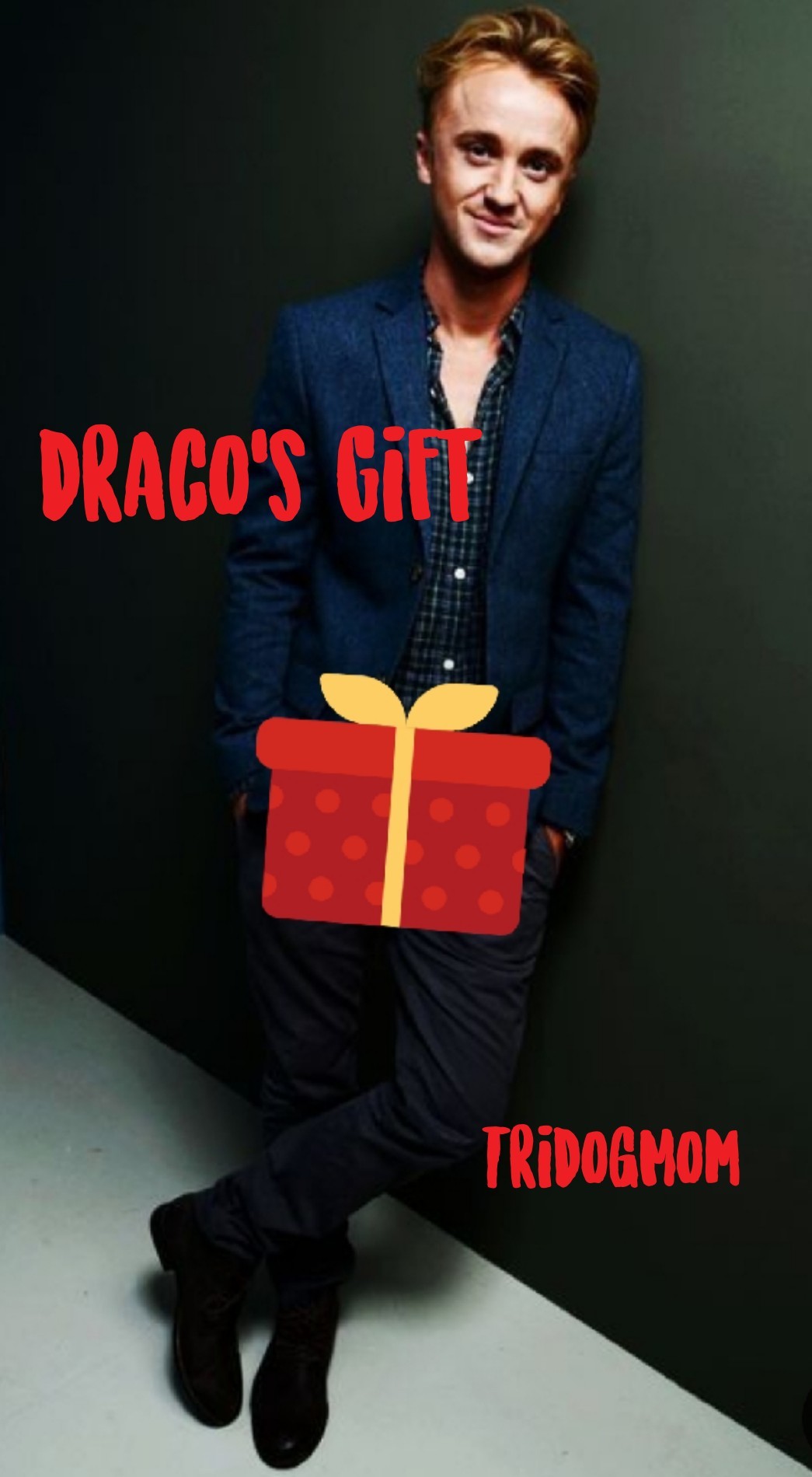 Draco clicked pause on the video playing in the web browser on his laptop. He had already finished shopping for Hermione this year, but had been watching a different video and this one popped up after it finished. He had been searching for the perfect way to wrap a Christmas gift for his wife of five years, and found an instructional video on a site called YouTube. Normally he had the house elves wrap everything for him, but he wanted to do one by himself.

Draco had started dating Hermione about three years after the war when she started coming to the Manor once a month to make sure his house elves were treated fairly. The Ministry had made his family part of a test group for the House Elf Protective Services. So every month, Hermione would show up with her clipboard and follow the elves around for a few hours and ask him questions about their welfare.

By the end of the testing, he and Hermione had formed a tentative friendship that led to her inviting him out to drinks with a bunch of people their age at the Leaky Cauldron on Fridays. Seven months later, they went on their first date. One year after that, they were married on a warm July night in the Manor gardens.

After they were together for a few months, Hermione had introduced him to the Muggle world and all the advancements they had made that, in her opinion, made it easier to live than in the wizarding world.

While he found traveling by cars and planes to be a waste of valuable holiday time, he did love watching movies on the telly, reading by electric lights, and microwave popcorn. His favourite Muggle things were his mobile phone and his laptop, but specifically the internet that his laptop connected to. Being able to ask the Google any question and get an answer was beyond any kind of magic he had seen and wished he had something like that when he was at Hogwarts doing research. With his mobile, he loved being able to text Hermione throughout the day. He couldn’t imagine the workout an owl would get if he tried to talk to her the Wizarding way. Plus, how would Hermione be able to send him pictures of her tits if she had to use a camera and develop the film? No, text messaging was far superior to owl post.

Starting the video over, he watched as the men gave their presents to their women and the happiness on their faces as they opened them. He had never heard of giving a woman this kind of present before and he wondered if this was something that was common in the Muggle world and he just hadn’t heard about it yet. These occurrences happened to him less and less as the years went on and he became more comfortable with Muggle technology.

Glancing at the clock on the bottom of the screen, he realized he only had a half hour until Hermione was home. She had been out doing some last minute Christmas shopping with Ginny Potter before they spent Christmas Eve, just the two of them like they did every year.

“Can you wrap this for me?” He held out the pink diamond tennis bracelet he was going to give Hermione tonight. “I am going to give something else to her tonight  instead.”

Tippy grabbed the bracelet and popped out of the room. Within seconds a large box, a roll of wrapping paper, a large red ribbon, and tape appeared before him. Merlin bless that elf. He watched the video again and started to wrap the present.

Taking the lid off the box, he wrapped it before attaching the bow to the top with a sticking charm. He used his wand to cut the paper and wrapped the bottom of the box. Restarting the video one last time, he cut a hole on the side like they said then set it down to examine his work. It was sloppy, but Hermione wouldn’t care about that. She would be happy that he had done something without magic. Placing the box under the tree, he left the room to get ready for dinner.

They had finished their traditional Christmas Eve dinner of Chinese food that they ate in front of the telly as they watched A Christmas Movie. Draco didn’t care for the movie, but Hermione said eating Chinese food and watching this movie is what she did with her parents every year. After finding out she was not able to restore their memories, she had tried to keep as many of their traditions alive as possible.

After dinner, before bed, Hermione was always able to open two gifts. A pair of Christmas pajamas, and a special present her parents had selected just for Christmas Eve. She had told him that one year her parents had given a book but realized their mistake when she stayed up all night reading it and fell asleep opening presents the next morning. From then on, books were banned from the Christmas Eve tradition.

“I am. Which one is for me?” Draco asked, moving towards the tree.

“The two one with the green snitches and gold bows,” Hermione answered.

Grabbing the boxes from her, he picked up the one containing her pajamas and the one he had wrapped and set it on the table.

“You go first,” Hermione told him as she pushed his presents towards him. “Larger box first.”

Draco unwrapped a set of deep blue silk pajamas, then watched as Hermione opened a pair of Donald Duck pajamas he had found that were fuzzy and soft. He thought they looked ridiculous, but he knew Hermione would love them. His next box contained a set of expensive fountain pens for his desk.

“I know you love the look of your penmanship when you use a quill, but pens are easier so I thought this would be a good compromise. You get the look of a quill with the ease of a pen,” Hermione explained as he looked at them.

“Thank you, love. They are wonderful.” Draco looked at the pens again before closing the box. “Are you ready for your gift?”

“Yes. Gimme!” Hermione said, reaching for the box. Draco loved how his calm, composed wife always turned into an excited child when it came to presents and Christmas in general.

“Wait, you have to close your eyes,” Draco told her.

As her eyes closed he thought back to the directions from the video and he unzipped his pants.

Step one: Cut a hole in a box.

Step two: Put your junk in that box.

Grasping his member, he stroked it twice. Thinking about Hermione’s reaction and the reward he would get after, had him hard and he placed his cock through the hole in the box.

Moving closer so the box sat on his lap, he placed his hand on her arm.

“Okay, you can open your eyes.”

Hermione looked at him and smiled. “Did you wrap this yourself?”

“I am so proud of you. It looks great,” Hermione said as she went to grab the box.

“I have to hold on to it. The lid comes off,” Draco told her while grabbing the sides of the box and making sure it stayed in place.

“What in the actual fuck?” Hermione looked from his face to his dick in the box and back. “Why? Just why?”

“What?” Draco’s smile fell from his face.

Why wasn’t she reacting like the women in the video? They had loved their man’s dick. Why didn’t Hermione like his? Was it because he wasn’t wearing a suit and sunglasses like the men had been?

“Why did you wrap a box and put your dick in it?” Hermione looked like she was torn between laughter and anger.

“I told you, I watched a video about it,” Draco huffed. “But in the video the women actually liked their gifts.”

“Show me the video.”

Draco went to grab his laptop while trying to keep the box attached to him. It was difficult because his, now flaccid, penis didn’t want to stay in the hole.

“For Merlin’s sake, Draco. Take your damn dick out of the box.”

Removing the box, he tucked himself back in his trousers then grabbed his laptop. Navigating to YouTube, he went to his history and pulled up the video. Dick in a Box began to play and he watched as Hermione’s face went from annoyance, to amusement, then finally she started laughing.

“Oh my god, Draco. Is this the video you watched?” she asked.

“Yes. I followed the instructions exactly. ‘Cut a hole in the box, stick your junk in that box, make her open the box.’” Draco looked between the video and his box again. “I know I get Muggle stuff wrong sometimes, but what did I do wrong?”

Hermione had tears running down her face and was still laughing at him as he explained himself. It took her a few minutes to calm down before she could talk to him.

“Draco. This isn’t an instructional video.” She hiccuped as she started laughing again. “This is a joke, a parody. Muggle men don’t actually give women a box with their dick in it for Christmas.”

“Oh.” Draco felt stupid, then angry. “They should have said that! How was I supposed to know this wasn’t what men did?”

“Did you honestly think I would be happy to open a box with your dick in it?”

“Why not? You’re happy when you open my trousers and there is a dick in there,” Draco huffed.

Hermione started laughing again, and after a few seconds, Draco joined her. Now that he thought about it, how could he think Muggles actually exchanged boxes of their genitalia?

Hoping to salvage the evening, he leaned forward and kissed her. “Want to play with your present?”