Angel Dust was finally convinced enough to leave his precious pet pig under your care. A certain deer demon isn't going to make it easy though.

I haven’t written in a very long time so please bear with me. This chapter is mainly just to start things off & set the tone. In that case, hopefully you’ll like it? Fingers crossed. 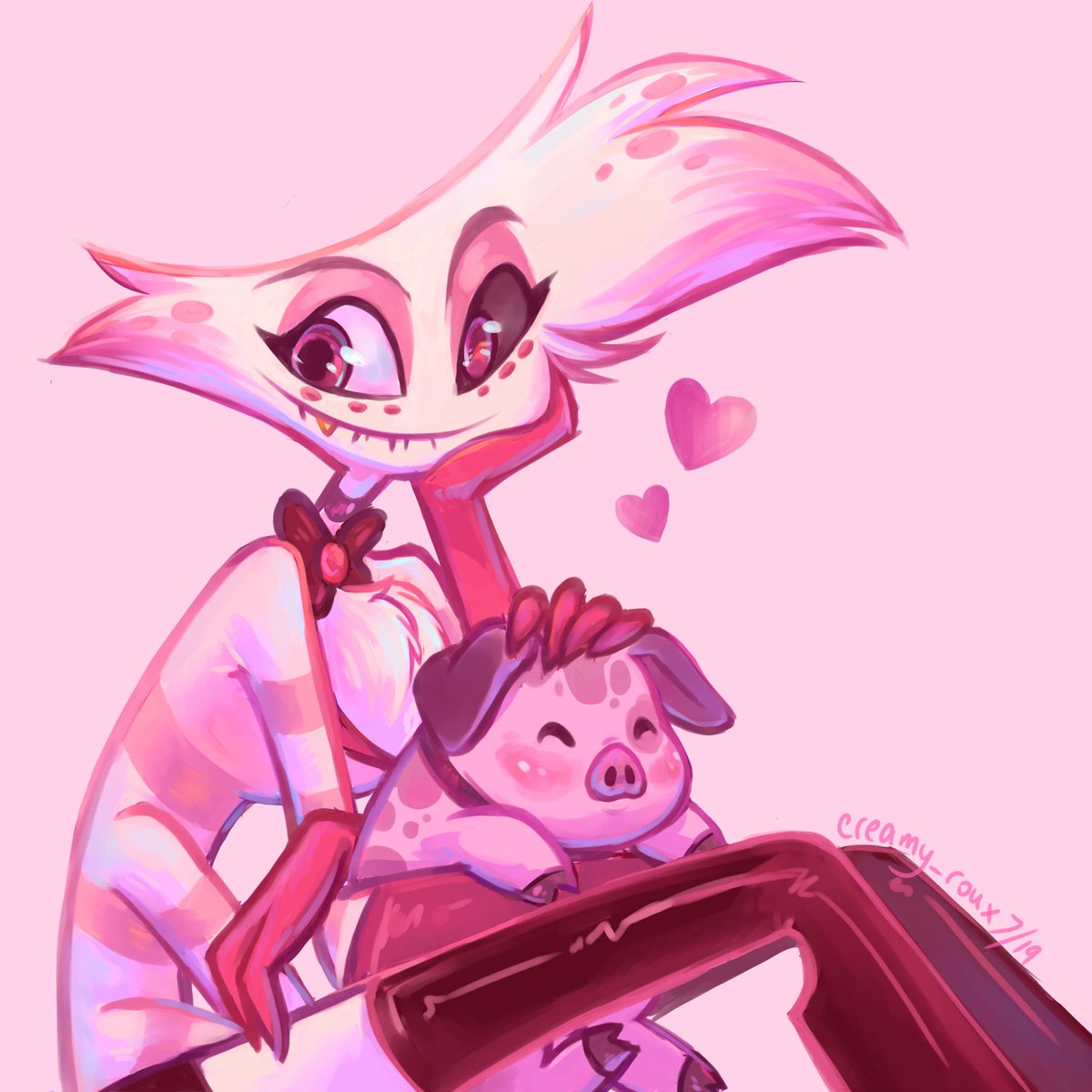 The huge list of things you were expected to do was nothing short of baffling. Then again, it wasn’t all too surprising either. This was Angel Dust for hooker’s sake, he was extra in all sorts of ways. Figuratively and literally.

Each chore had been sloppily scribbled down in his signature hot pink ink, displaying in detail on what to do step by step. The amount of effort it must’ve taken just to jot these little errands down to make sure his piggy was properly looked after was actually admirable to say the least. Since people tended to get lonesome during the holiday season, Angel was gone a lot more often around this time of year due to his ‘profession’. It was your job now to keep the prostitute’s pet company.

A faint sigh passed through your lips though. Man, this was going to take a while to get done. It wasn’t that you weren’t thrilled about the whole idea that Angel had eventually agreed to your request, because you most definitely were. Laziness just played a huge factor in making sure all everyday activities were often delayed. Be that as it may, you were going to try your absolute best at making sure the chubby piglet and its owner were generously content and satisfied.

The abrupt sound of the spider demon’s voice broke through your multitude of thoughts, snapping you back to the present. Oh yeah, Angel hadn’t left yet. Wait, had he been speaking to you the whole time? Whoops.

A small nod of confirmation led the tall arachnid to continue babbling on about the emergency contact numbers on the back of the wrinkled up paper, the pig being held securely in the crook of one of his arms, his other three busying with gathering the necessary materials for the night, as well as adjusting areas of his outfit which looked very appealing to the eye by the way.

Angel was adjourned in a tight-fitting sweater dress that was a lovely deep shade of amethyst that had sheer sleeves the color of ruby, topping it all off with matching thigh highs and fuzzy leg garters to hold them up nicely, daringly executing the fur trim on his high heeled boots & gloves. It did well to compliment the various speckles of pink spots along his spindly frame. The sparkly Christmas hat was something the concubine added on last minute which finished the ensemble to perfection. Once Angel had turned away from you, leaning down towards the floor to grab another item, bright glittery words sewn in cursive right at his backside read ‘ 10 Bucks 4 A Sleigh Ride ‘. All you could do in that instance was gulp audibly. You knew damn well that he wasn’t talking about sleds. Oh sweet merciless Satan.

At that moment, a squeak toy that had just been picked up was flung at your face.

There was a startled noise and flinch at the quick action, drawing you out of your thoughts once more. This time when your eyes had peeked up, the spider’s mouth had settled itself into a slight scowl, the porker still nestled against those decently shaped floofers that you had admittedly gazed at on numerous occasions. Normally, he loved any and all attention when it came to his body, but the fact that you had hardly been paying attention this whole time during his explanations made the corners of his mouth shift downwards with unhidden irritation.

Upon noticing the other’s impatience simmering through, emphasized by the bottom pair of arms now placed sternly at his hips, you could only avert your gaze elsewhere. Whoops again. Being easily distracted was a curse but it wasn’t entirely your fault that he had such good-looking features.

“ You’re not going to war, Angel. You accepted my offer because you know I’m responsible enough. I got this, you don’t need to worry. ”

You had cut him off from uttering anything else. It seemed that all Angel needed was some extra reassurance which altogether appeared to be true as you watched the muscles in his joints gradually relax, no longer rigid with all agitation dissipating from his facial expression, that usual lopsided sharp-toothed grin back where it belonged.

With that said, he had allowed you to hold onto Nuggets before pulling you into a four armed embrace, planting a grateful smooch on your cheek, much to your delight.

In just a few seconds, a flashy purse had been slung over his shoulder with a trio of hands fixing at his clothes and fluffing up any disarray of fur and hair before blowing a kiss farewell as he headed out.

You could hear a tiny snort come from the piglet, just the two of you in the now quiet room. Nuggets wasn’t the only one that already missed the eight limbed demon. Just two days, that wasn't so bad. It was no biggie. Peering down, your glance was met with two lil eyes of curiosity, doing sniffing motions with his nose. Gosh, that was undeniably adorable. There was no way you were going to let anything, or better yet, anyone harm a single freckle on Nuggets head.

This weekend was sure to be easy peasy.

A polite knocking caused you to sit up straighter, eyeing the wooden door in silence at first. That whore must’ve forgotten something. Although, you labeled it as odd that he didn’t just burst through the door like he usually did when entering a room. With no indication that the door was going to open anytime soon, you had lifted yourself off from the edge of the oh so plushy mattress, both brows furrowed. As if picking up on some unknown aura that you weren’t aware of, the pig proceeded to nestle even closer within your arms, almost whimpering. Strange..

After making your way over, you pressed your ear right up against the center of the door to try and listen in on any noises coming from the other side. There was nothing. Ugh, this better not be another one of the spider’s pranks.

Your hand languidly reached down for the knob.