Chuuya had the habit of bringing home what he wants, whether it was an item or a pet, but what happens when he brings home a child?

Hi! It's Roki! So I know I just started a multi-chapter so I'm uploading this here and making it a collection of tiny tropes and short fics about their new little family. Also I just love the ridiculous idea of parents skk.

Chapter 1: To Acquire Something

Chuuya had this habit of bringing home things that he saw was pretty or something he desired. Money was never a problem to him so anything he saw he wanted was going home with him.

A limited edition hat was a new addition to his collection. His third favorite fruit wine on sale would end up sitting in his wine cellar. That orange cat he saw in the street? Dazai kicked the cat out because it turned out to be Natsume and they couldn't really take care of a man disguised as a cat.

It was Chuuya's bad habit but of course Dazai still loved that side of him.

But then one day Dazai came home to a little girl on the couch, wide eyed once she saw Dazai come in from the front door. They locked eyes for a moment or two before Chuuya came in from the kitchen.

"Oh, you're home," Chuuya greeted, giving a plate of fruit to the child, "Welcome back. There are snacks if you'd like some before dinner."

"Chuuya, not gonna explain?" Dazai asked, pointing to the child.

Chuuya looked at the kid before hugging her tight.

He carried the girl with a slice of apple in her mouth.

Yua stared at the man before wrapping her arms and hiding her face around Chuuya's neck.

"You don't have to be so scary," Chuuya said.

"Chuuya, I'm not scary!" Dazai replied before making his way to the pair.

Yua waved her hand at Dazai and whispered, "I'm not."

Chuuya frowned but agreed nonetheless. He wasn't about to start an argument with the kid around.

That night consisted of a drive to a far away restaurant where they knew no one knew them. Dazai would lie if he said he didn't like the company Yua gave to the two of them. Their usual bickering over dinner, over what to pick to eat, were all gone, the table filled with laughter instead towards Yua's silly little ideas, drawings on the table napkins, and random thoughts. Their little family didn't seem so little anymore.

The car ride home was somewhat calmer, with Yua sitting on Dazai's lap and sleeping as Chuuya drove them home.

"Where'd you find Yua?" Dazai asked as he placed his coat over the frame of the little girl.

It was a question Chuuya dreaded but knew that he wouldn't get to escape. It was inevitable, Dazai would be curious.

"I... frequently go to Suribachi City," Chuuya admitted, "I just... the thing was destroyed because of Arahabaki so sometimes I'd go and help rehabilitate the place. Today, I happened to find Yua alone. I doubt her parents are still alive though."

"I understand your reasoning, Chuuya, but, do you... do you really think it's safe for Yua to be with us?" Dazai was now asking the questions Chuuya decided to ignore in the first place.

"If we're gonna be her parents, then her life would always be in danger," He pointed out.

Chuuya frowned, "But we're gonna be there to protect her."

"But what if we aren't?" Dazai asked, making Chuuya laugh.

Chuuya placed a hand over Dazai's, wanting to look at his husband but refusing to put his family in danger.

"You've never let me be in danger. I trust you."

Yua stirred in her sleep then cracked one eye open looking at Dazai and then Chuuya. She opened up her arms, trying to grab Chuuya.

"Papa Chu," she called, her body still weak from the sleep.

"Seems to me she only loves Papa Chu," Dazai stated then Yua hugged whatever she could of Dazai's chest.

"Papa Samu, love you too," she muttered, eyes now closed before she drifted back to sleep.

Dazai hugged her and nuzzled his nose to the girl's dark hair, "Chuuya we're keeping her. You'll never take her away from me."

Chuuya chuckled, "Yeah, sure. Are we gonna fix the adoption papers for her tomorrow?"

This was a little extra to close up the thread but since I'm continuing it here, it's not the end yet 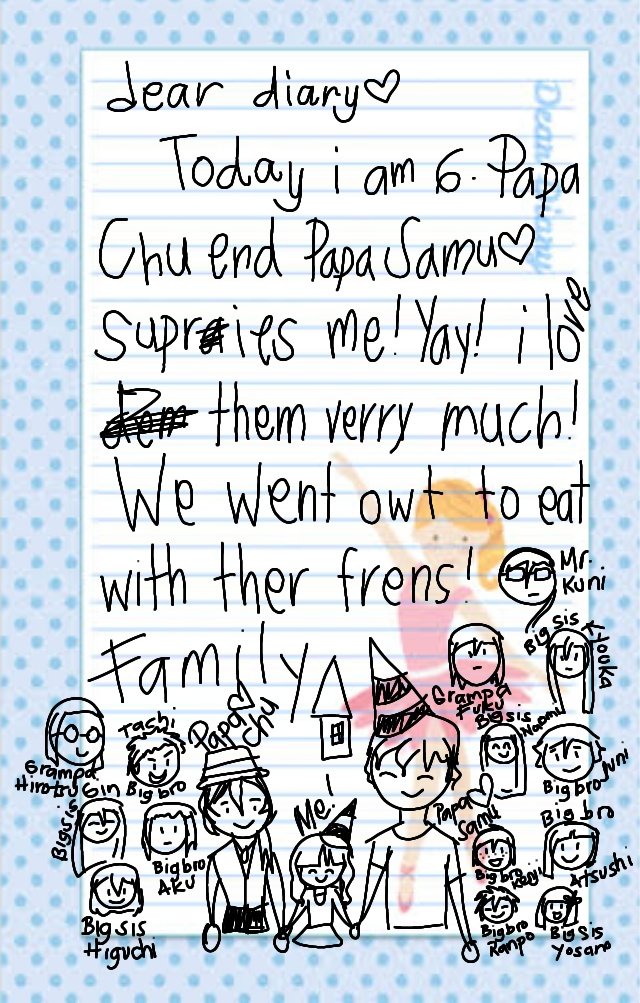