Katrina Koroatsume is the newest addition to Class 1-A! With her arrival comes romance, laughter, and a powerful ally on the field. As her past unfolds, however, she realizes too late that no one she cares for is safe. Will Midoriya Izuku and her friends find a way to escape the villain that's been haunting her for as long as she could remember? Can Izuku and Katsuki put aside their former turmoil and succeed as soulmates? Will Ochako Uraraka ever move on from a certain green-haired hero?

Join us on a perilous journey about family, love, and the art of letting go.

This story begins directly after season 3 but diverts from canon afterward.

Thanks for clicking! Sorry if some of the paragraphs look funky, we had an issue with formatting with AO3's copy/paste/ I hope it's okay, though!

Bakugo laid in bed, staring at the ceiling and holding his phone to his chest.He usually fell asleep much earlier than this, but tonight his mind refused to shut itself off. Tomorrow would be his last day of being under house arrest. Good , he thinks, turning over on his side, I'm fucking bored. His phone vibrates and he checks it. The group chat of the entire class was blowing up. 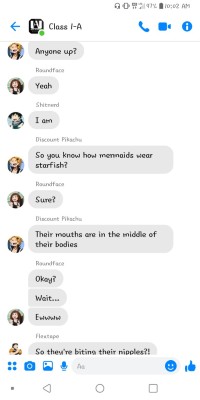 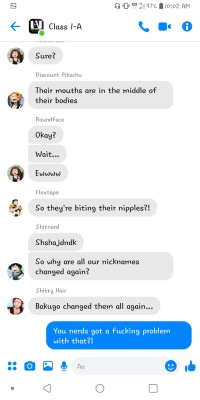 Of course that stupid Deku would be up late, talking to his stupid friends. He and the rest of those shitty extras had class tomorrow. Not only was he annoyed by the constant vibrations of his phone, but the fact that Deku was staying up past these ungodly hours was bothering him as well. It was like that damn green bean was everywhere since their fight. Didn’t that nerd get enough of him when he beat his ass into the ground?

He remembered the boy asking what he thought about his Shoot Style. What kind of fucking name is that? It’s not like it’s a special attack or anything. It’s fucking stupid. Nerd thinks just because he made a little progress it means he’s catching up. Even with All Might’s fucking power, he couldn’t even come close.

He spent the last few days mulling over the events that got him here. Why would All Might choose Deku, of all people? Even if All Might wanted to choose someone who's quirkless, why that crybaby? Why was Deku considered worthy?

The whole reason Bakugo had teased Deku so much was simply because he was weak. He couldn't go around thinking he could be a hero and end up dead because he took on a villain that was too much for him. Bakugo learned at a young age that not all men were created equal. To be born quirkless was basically a biological statement that you were rock bottom of society. Powerless. Useless. A nobody. You couldn't become a hero without power. Quirkless Deku would be killed if he tried. But now things have changed. Deku wasn't quirkless anymore. In reality, he had one of the strongest known quirks.

The hate for him no longer stemmed from watching him throw away his own life, instead, it came from a place of rivalry. But did he really hate Deku? Sure, it pissed him off that Deku was so weak, but there’s always been something more about Bakugo’s feelings toward Midoriya.

Bakugo's mind raced from the boredom of being stuck in the house for days. Enough , he scolds himself, Deku isn't even worth thinking about . Why the fuck am I obsessing over this? But he knew why. Dammit, I can’t keep the damn nerd out of my head.

He had pushed the feelings away ever since he was a kid. He didn't want to be the way he is. What would it do to his career if the media got hold of the fact that he's gay? Would villains target him? Would he still be able to be the number one hero? Would he still have his friends? What would his parents think? Would Deku look down on him?

Growling, Bakugo jumps out of bed restlessly. He throws open his door, slamming it behind him despite the fact it was past midnight. He had to do something. He bangs on the bedroom door next to his. What the hell is he going to do about this? He can't go on pretending to be someone he's not. It was torturous to compress it all.

The door opens and Kirishima stands in the doorway, wearing nothing but a pair of loose-fitting pajama pants over his boxers. The redhead stood there for a minute, rubbing the sleep out of his eyes. His face widens with surprise at the sight of Bakugo. "You look like hell, man. What's wrong?" He yawned.

"I can't fucking sleep," Bakugo's eyes had deep dark circles under them.

Kirishima leads him inside and offered Bakugo a bean bag to sit on. He slumps in the chair. It feels nice , Bakugo thought with his head tipped back. He wanted to sleep, but his mind just wouldn't shut up. The truth was, he had about three hours’ worth of sleep in the past 48 hours. He was near-delirious. All because of fucking Deku.

"So, what's going on, man?" Kirishima asked. Bakugo's head pops back up, "I told you. I can't fucking sleep." Kirishima frowns, there was something off about the hotheaded blonde. Sure, he did look like he desperately needed some sleep, but Kirishima had a hunch that those baggy eyes were more than the result of being sleep deprived. Something was bothering Bakugo. Kirishima asked, "so you came to my room just to complain?"

Bakugo growls, "so what if I did, Shitty Hair?!"

Kirishima leans against the wall behind his bed, "well, if you're not going to tell me anything I might as well sleep. Some of us have class in the morning." As Kirishima looked at Bakugo, he knew there was something more going on. He sighed at the troubled boy in his chair, "I'm your friend, man! You tell me anything and it doesn't leave this room."

Bakugo sighs, too tired to protest. He knew he should talk to someone. Kirishima would be the only one he trusted with this. "Fine," Bakugo leans forward on the bean bag. "But if you tell anyone, I'll kill you."

"Lips are sealed, bro!" Kirishima smiled, giving him a thumbs up. Bakugou inhales deeply before saying it.

Kirishima stopped in his tracks. A single tear welled up in the corner of his eye as he balled his fist with a grin, "that is so manly!"

"That's all you have to fucking say?" Bakugo scowled. Internally he was grateful. That response could have gone south if it were anyone other than Kirishima.

Kirishima smirked, leaning forward, "so you gotta have a crush man! Who is it?"

Bakugo yelled, "just because I'm fucking gay doesn't mean I like anyone! Why should

I care about any of these damn extras?"

Kirishima laughed, not believing a single word, "oh, come on man! You look like you haven't slept for days! You've been thinking about someone! Just spill it!" He seriously lost sleep over some guy? That’s out of character if you ask me. It’s gotta be someone he doesn’t want to tell. He would have just said something to them otherwise.

Bakugo sighed, rubbing his eyes, annoyed they wouldn’t stop stinging with exhaustion. Fucking hell, he won’t stop talking until I say it. Fuck. Maybe just saying it will help me get some damn rest. He finally spits out, “fucking fine, Shitty Hair! If you must know, it's that damned Deku."

Kirishima’s red eyes widen in surprise, "Midoriya?! I thought you hated his guts?" It just didn’t make sense to him. How could such fated rivals find any attraction toward each other? Especially when it was Bakugo who mainly was at fault for their rocky relationship. Kirishima could deal with Bakugo’s rough personality and sass him right back, but Midoriya wasn’t like that. It’s not exactly an ideal match, but whatever makes the guy happy, I guess.

Bakugo huffed, "the scrawny little bastard is so fucking weak. I've always hated that about him. The fucking crybaby trying to play hero and probably getting himself killed. That's why I tried to stop him from coming to this school."

Kirishima looked away from his friend, toward the window overlooking the front of the building. A few cars pass by, headlights glaring. One thing Kirishima was sure of was that the kid he knew, the classmate that helped him rescue his friend from the League of Villains, the guy who was always filled with passion for heroism, was nothing short of strong. He says, "you're telling me that the Midoriya I know is weak? The guy is always the first to jump in to save any of our asses when we're in trouble. What kind of badass is willing to break his own bones just for a tournament or to throw a ball in Gym? Sure, he's a crybaby but his quirk makes me glad he's not one of the villains."

Bakugo sat in silence for a moment. He knew Deku was getting stronger, but was Kirishima right? Was Deku really not the weak kid he thought he was? He had to admit that Deku gave him a run for his money at least a couple of times. His friend had a good point.

Kirishima says, "Midoriya cares a lot about you. Should have seen him when you were taken. You should talk to him."

"No fucking way." Bakugo shook his head. "I wouldn't tell him if my damn life depended on it." Kirishima pressed, “come on, man! What’s the worst that could happen?” Bakugo grit his teeth, “think about it, dumbass. What would happen if it got out that I’m gay? What would it do to my career? What would my parents think? Besides, I’ve seen him fucking stare at that gravity girl. He would just think less of me. I only told you because you’re gonna keep your fucking mouth shut.”

Kirishima raised an eyebrow, “no one is gonna judge you, man. You’re the manliest person I know! No one would dare think less of you!”

Bakugo’s voice groaned, reliving the memory in his head, “they did before. You wanna know why I’m the fucking best fighter at this school? I had to learn from a young age how to defend myself. The kids in middle school somehow just fucking knew I was different. They didn’t like it and tried to beat me up constantly. It was like a fucking game to them. Once I started showing off my quirk, everyone suddenly thought I was some fucking god or something and they forgot all about it.”

Kirishima tilted his head, “seriously? People thought you were that cool?” Bakugo yawned into his hand, his words slurring, “yeah, they fucking did. It was enough to make them forget why they hated me.”


Sounds like Bakugo really did have it rough. No wonder why he doesn’t want anyone to know.