A Little Tied Up

Pansy’s quiet evening of Christmas movies at home is interrupted by someone.

This was written for xxdustnight88. :) I hope you like the direction I took with your prompt, this one was fun to write!

Prompt: Okay, Character A’s not Santa, but they did have a very good reason for breaking into Character B’s house.

Special thanks to my fandom bestie, JenniseiBlack, for alpha reading for me!

Disclaimer:
All non-original characters, plot points, and information belongs to Warner Brothers and/or J.K. Rowling. The story plot and dialogue belongs to me. I do not write for profit.

*My works and ideas are not to be copied or otherwise used without my explicit permission.* 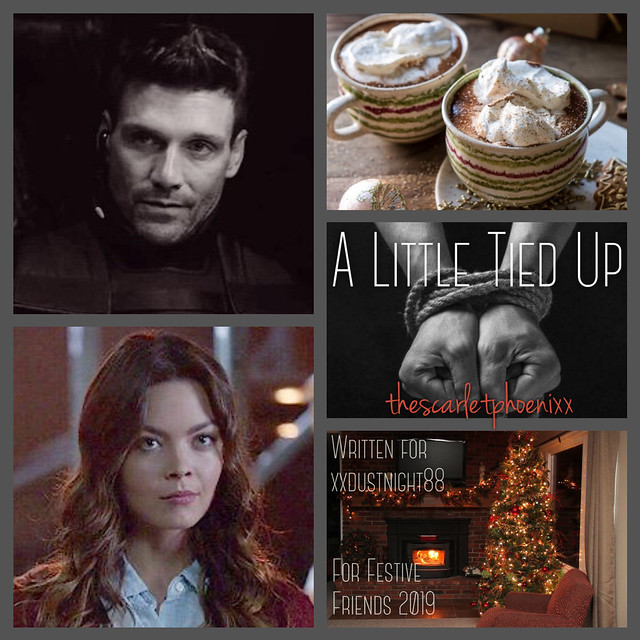 Pansy was laying in bed watching Hallmark Christmas movies, when her relaxing evening was interrupted. She felt a ripple within her wards... someone was inside the boundaries. She listened closely, and could faintly hear someone downstairs, rustling around. She grabbed her wand and climbed out of bed, intending to face the intruder. Pansy didn’t make it known, but she loved cheesy holiday films, and whoever was downstairs, had done the wrong thing by interrupting her movie marathon!

She cast a silencing charm on her already slippered feet, and crept down the stairs, wand at the ready. When she reached the point halfway down where the solid wall ended, she stopped, staying hidden from the intruder. She could hear them moving around, and a soft thud told her that they either dropped or bumped into something, followed by some hushed swearing. It was a man, she could tell by the roughness in the whispered words. She just hoped he hadn’t knocked into her Christmas tree, it had taken far too long to decorate it just to her liking, even with magic.

Pansy wasn’t sure who could possibly be in her house at this time of night, but whoever it was, was going to be real damn sorry. She had come up with a quick strategy in her head, and when she jumped out from behind the wall, she hit him with a triple lineup of spells: Immobulus, followed by Mobilicorpus, and lastly, Incarcerous. This combination that allowed her to immobilize him, move him into a nearby chair, and sufficiently bind him so he couldn’t escape.

The intruder let out a yelp as he was caught off guard in the barrage of spells raining down upon him. More colorful swearing reached her ears and she rolled her eyes. With a flick of her wand she hit him square in the mouth with a new spell she’d invented, a web blast. She reminded herself to thank Peter again for inspiring her and helping her get her spell just right to mimic his impressive self-developed web fluid. She liked that kid, he reminded her of a sweet little puppy, always eager to please his teammates.

“Well, well, what have we here?” Pansy purred as she descended the remaining stairs.

She flicked her wand to turn on the lights. At first she was confused when the lights revealed the face of the intruder, but she recovered quickly. She crept closer, keeping her wand pointed at him. He hadn’t made a sound since she had turned the lights on, he was just watching her intensely with his dark brown eyes.

“Alright stranger, what do you have to say for yourself?”

She waved her wand and the webbing serving as a gag dissolved into a puff of smoke. He stretched his jaws.

“Ugh, what was that stuff? Some kind of weird thing that Stark dreamed up?”

“Uh uh, I’ll ask the questions here,” she replied as she drew closer.

He looked up at her through his eyelashes.

“Mmm, is that so Brock ? Because I think you’ve left a lot to be desired.”

Pansy closed the distance until she was standing directly in front of him. She leaned in and lodged her wand under his jaw, tilting his head upwards.

“Whatever shall I do with you?”

“Do your worst, witch. I can take whatever you dish out,” he said confidently.

Gingerly, she lowered herself until she was straddling him. She curled the fingers of her free hand around the back of his neck and brought her lips to his ear.

“I know your weaknesses, Rumlow, and I’m not too proud to use them to my advantage.”

Pansy drew her face back in order to look him in the eye. The desire she saw there matched her own. They might have reached a small stalemate, but the game wasn’t over yet. She just needed to make him squirm enough to claim her victory.

She hummed a little and flicked her wand, ridding both of them of their shirts. She pressed herself more tightly against him and began to torture him with slow kisses trailing down his neck.

“You’ve got a few dirty tricks up your sleeve tonight, haven’t you?”

“You did say to do my worst.. and I never agreed to play fair,” she hummed against his skin.

“Alright, I can admit when I’m beat. Now how about you untie me and we can finish what we’ve started. I might even make you some hot cocoa just the way you like it, if you play your cards right.”

She snorted and pulled away slightly, eliciting a soft whine from him.

“If I play my cards right? Oh no darling, I’ve won this round, and I think I’d like to keep you right where you are,” she said with a sparkle in her eyes. “A little bondage never hurt anyone.”

Squarepeg72, articcat621, xxDustNight88, and starrnobella as well as 2 guests left kudos on this work! (collapse)