In the years since the Grom situation, Jamie has settled down with a family of his own and has been working with UNIT on a barely occasional basis. However, he soon finds himself thrown back into the world of the Doctor, thanks to a surprise visit from an old friend who brings a dire warning. Takes place soon after Castrovalva. Fifth story in the Time With a Twist of Tartan series.

Not my characters (except for Kathryn, James Duncan, the baddies, and any other OCs that show up). This story is for entertainment purposes only. No copyright infringement is intended. Also, the 1st Doctor and companions don't really play an active part in this story, but they appear in flashbacks so I thought it was necessary to include them. 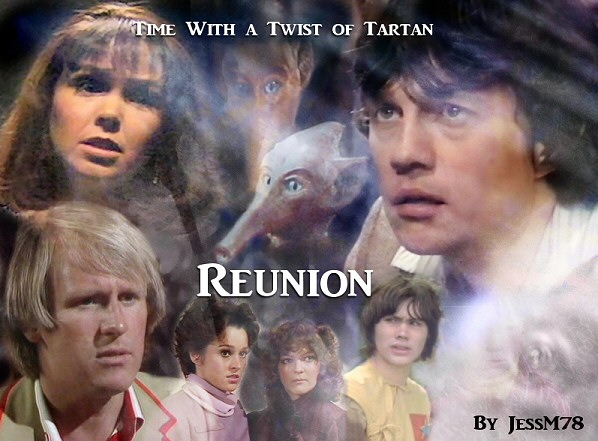 Stopping only once to glance over her shoulder, the petite woman quickly made her way down the street, desperate to find a telephone box as if her very life depended on it. Only mere moments ago – or what seemed like it, at least – the older man with whom she'd once been good friends had visited her home. It had been years since she had seen him last and she more than welcomed the visit, but she quickly learned its matter was one of urgency.

An attack on Earth was imminent.

They had been through a similar situation before and he had averted that disaster. Surely he would be able to do so this time?

Much to her surprise, that was not the case. He had made a quick visit to see her on his way to head off yet another urgent crisis and this time was unable to intervene.

Unable to make contact with another version of himself, he'd done some quick scan with his computer. After mumbling something to himself which she couldn't make out, he suddenly mentioned another old, mutual friend of theirs, one whom he was certain they could count on. He'd had a fair idea of this man's location but needed to find him quickly and warn him. The old man being quite pressed for time, he seemed certain she herself would have some success in doing so.

She had regarded him in confusion as he explained his proposal. How could he be certain their friend was on Earth? He'd given her a rather impatient look, one that said 'I know what I'm doing; just trust me.'

That was all very well, but how was she going to get back to Earth, let alone during the time frame this attack was due to occur?

Before heading off once again to save the day, he'd somehow managed to find a very short window of time to transport her there several days before the attack was expected to happen. He'd given her the bare minimum information of the enemy behind this attack. Suspecting they might already have spies on Earth, he warned her to be as covert as possible.

Just before they parted company, he had given her the phone number of a certain agency, one which seemed vaguely familiar to her and which he knew their friend to be associated with so that she may contact him.

All this information he'd quickly imparted had been a lot to take in in a very short time. She'd briefly glanced down at her very swollen belly, recalling how she'd almost objected to being thrown into this situation. But he had desperately needed her help and after emphasizing how much he trusted her, she wasn't about to refuse.

She was thrown from her thoughts as she finally located an empty telephone box. Rushing inside, she picked up the receiver and rang the agency, asking to speak to her friend. The man who answered seemed quite suspicious of her motives until she revealed her identity and the fact she'd once worked with them. There was a protracted silence – as if he were looking up information – after which he returned, seemingly satisfied if not surprised to hear from her.

She repeated the request to speak to her friend, but was informed the young man was not really associated with them any longer. She felt a bit of nausea well up inside her, unsure if it was due to her current physical condition or her mounting frustration. Taking a deep breath to calm herself, she then asked if they had a phone number where she could reach him.

“Well, this is the only one we've got,” the man replied, sounding rather disinterested as he rattled off the number. Nodding, she quickly searched her purse for a scrap of paper and pen. Grabbing the items, she scrawled the number onto the small, yellow piece of paper before gratefully thanking the man and hanging up the phone.

She stared for a brief moment at the paper in her hand, hoping it would be her ticket to getting a hold of her old friend. What if he had since moved house and had got a new number?

She had to try. If the older man was correct – and given his track record he usually was – the fate of Earth hung in the balance. She had fleetingly wondered if it would have been easier for her to inform the agency of the imminent danger herself, but realized her friend would only help her convince them.

Of course, she had to convince him first.

She quickly pushed each button in succession and held her breath as she heard the ringing tone.

“Hello?” a very familiar man's voice – one she'd not heard in ages – answered.

Quickly covering the mouthpiece of the phone, she released an explosive breath and then turned back to it. “Jamie?” She briefly winced at the rather childlike tone of her voice.

“Oh, good,” the woman said, giggling slightly in overwhelming relief and trying to mask the other emotions that spilled forth upon hearing his voice after so long. “I wasn't sure I had the correct number.” Sobering up, she decided to get to the point. “I really need to speak with you. This is very urgent. The Doc---”

“Who are ye?” he suddenly broke in suspiciously.

“All right. You're probably not going to believe any of this ...” She drifted off, feeling her cheeks flush.

Her chest heaved as she took in a deep breath.

She was met with nothing but silence on the other end.

5 guests left kudos on this work!