With two-hundred-sixty-seven wins in the Arena to his name, Armand Hammer is the only fighter in nearly twenty years to ever come close to earning his freedom. He's not about to let anything stop him now, especially not a scrawny new recruit with haunting green eyes and a mysterious past.

Timothée doesn't know how he ended up in the Arena. He knows he didn't do anything to earn him a life sentence, and he would never have chosen the Arena as an alternative to a lifetime of servitude. He can only think of one reason for his predicament: someone wants him dead.

Y'all, Im so excited about this fic. I've been working on it for a while and thinking about it for longer. It is complicated. It is angsty. It is dark. Despite my best intentions, it is still very much in progress. I may screw things up as I sort out the plot, but the time is here, and so we begin. By the end of the month, I'm hoping you'll feel as though the journey has been worth it. 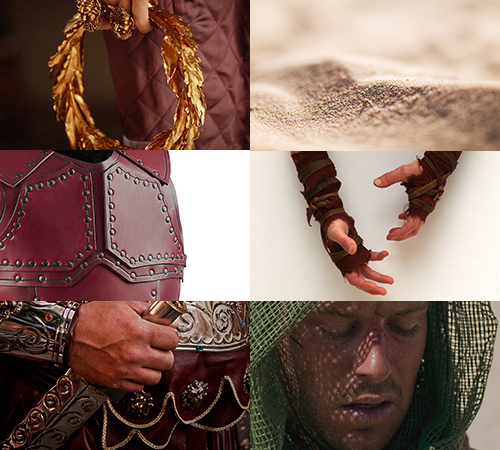 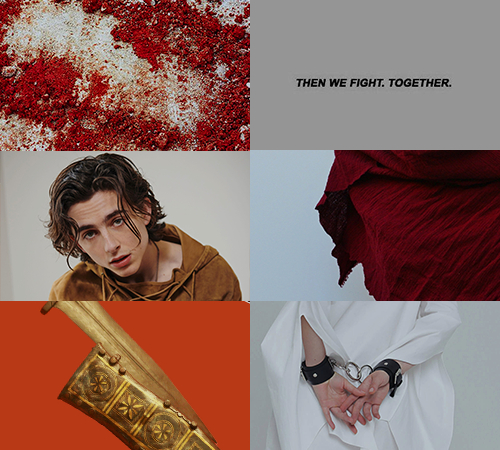 The warning buzzer echoed throughout the block, and the men looked up from their afternoon pursuits in wariness and curiosity. The door to the outside rarely opened during the week, and the event could mean an amusing diversion or a threatening development...or both, depending on your perspective.

From his position at a table with his back to the stone wall, Armie was one of the few men who didn’t react. He continued to polish his armor, his fingers pushing the blackened cloth in slow circles across the scuffed leather. The scent of turpentine tickled his nostrils and he breathed shallowly through his mouth so as not to inhale the fumes too deeply.

The buzzer sounded a second time, and was followed by the predictable flickering of lights as the electricity in the block surged to unlock the main door. It was another thirty seconds before it slowly slid open.

Now Armie did glance up. Commander Brolin stepped into the entry cell and looked around. His observant blue eyes scanned the men, and then he smacked his rod on the metal screen to his left.

“Move back, Patel,” he snapped. “Other side of the line, you know the drill.”

Dev muttered something under his breath. Then he slid back on his bench a few feet until he was on the far side of the thick red paint that marked a semi-circle on the cement floor surrounding the entrance.

Brolin looked over the other men. His eyes caught Armie’s, and he smirked as Armie stretched his leg out so that his left foot was just over the line. Brolin rolled his eyes and turned to the open door behind him.

Seven bodies, their chains clanking and rattling, appeared in the entry cell. Lieutenant McConaughey crowded in behind them, prodding them forward with his rod, and the door slid shut.

Brolin unlocked the gate and swung it wide. The prisoners shuffled forward until they were standing in a tight circle in the center of the common space. McConaughey closed the gate and the locks slid home with a bang that echoed off of the stone walls and floor.

Brolin began speaking in an authoritative voice. “Gentlemen, this is the common area of the block. Meals are served here. You will spend most of your time in here, in your cells, or in the training arena. The door you just came through is the only way out of the compound, and most of you will never have reason to use it. That honor is reserved for those who have earned their freedom, an achievement most of you have no hope of ever seeing.”

As the Commander read out the rules — no fighting except in the Arena or in training, eating only during meal times and only in the common area, obeying every command given by an officer, and so on — most of the men seated around the room watched with interest. They scrutinized the new arrivals, sizing them up, looking for threats. Armie knew some would relish the sight of fresh blood and a fresh challenge. Others would be nervous someone new would prove to be their downfall.

Neither of those thoughts crossed his mind. He had no doubt that he could best anyone he came across. With twelve years and two-hundred-and-sixty-seven wins to his name, he had seen it all.

After finishing the bit of armor he was working on, he took a moment to casually look over the seven chained men the Commander and the Lieutenant had dragged in. On the whole, they were a sorry-looking lot, dirty, unkempt, and underfed. A few were a good size, showing evidence of muscles and strength. The rest were average.

Armie noticed the seventh man — a boy, really, from the looks of it — was hovering in the center of the crowd, shielding himself from view by the bodies around him. When a particularly large man shifted out of the way, he got a better look at the boy. He was the runt of the litter: scrawny limbs, stringy shoulder-length hair, prominent cheekbones. Armie could make out his bony joints jutting through his skin, skin that was obviously pale despite a layer of grime. His chains emitted a light rattle as his wrists and ankles shook.

As if the boy could sense Armie looking at him, he swiveled his head around. His eyes locked on Armie’s, and Armie was momentarily taken aback by the wide green orbs filled with fear, anxiety, and distrust. After a moment, the boy dropped his gaze to his feet.

With a shake of his head, Armie looked away. He didn’t give a shit about any of these men, least of all the smallest, weakest one who would be the quickest to meet his death. If he had learned one thing in his twelve years in the Arena, it was that it didn’t pay to make friends with the people you were trained to kill.

He gathered up his armor and pushed to his feet, uninterested in hearing the remainder of the orientation lecture. The Lieutenant looked his way.

“And this here is our celebrity, boys.” McConaughey leered at Armie and then executed an exaggerated bow. “Armand Hammer. You’ve heard of him, I’m sure. The only man in the twenty years of the Arena’s existence to ever come close to gaining enough wins to earn his freedom. He doesn’t lose, so if you want my advice? You’d better hope you don’t draw him as an opponent unless you’re looking to take the easy way out on the end of his dagger or choking between his giant hands.”

Armie ignored McConaughey, making his way around the edge of the room.

The Lieutenant laughed, and then his voice sharpened as he called out a command. “Hammer, halt.”

With an internal sigh at the old game, Armie stopped moving. He waited for the next command. McConaughey — and Brolin too, if he was honest — liked to use him to show the new men that no matter how successful they became, they were still at the mercy of the officers. Sometimes they would have him kneel, or execute a display of strength.

This time, however, he heard Brolin clear his throat. “Not today, Lieutenant,” he said. “Hammer, you’re dismissed.”

Armie relaxed and moved out of the common area towards the cells. His feet crunched on the gritty cement, announcing his presence and earning him a grunt of hello from an occupant or two as he made his way down the row.

His cell was all the way at the end of the block and larger than most. He entered through the open gate and carefully hung the armor in the corner before setting the polish and rags on one of the three shelves on the far wall. With a soft sigh, he sank onto the cot in the corner and stretched out on his back.

He was grateful that, in addition to the larger cell, his status — and his relationships with members of the staff and guard — had earned him a few comforts that the newcomers would probably never see: a larger cot with an actual mattress, a pillow, extra blankets that were soft to the touch rather than stiff and scratchy. At meals, he was given an extra portion. He was allowed reading material. During inspections, the guards often brought him contraband rather than rooting it out. And on Sundays, he was invited to dine with the Commander, eating real food with actual taste and drinking dark, syrupy port wine.

Thirty-three more. And then he’d be free.