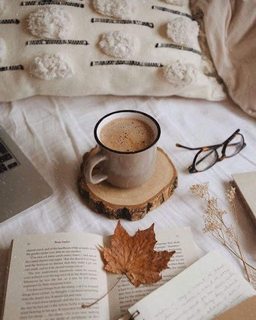 [IMAGE: A cup of coffee sits on top of a wooden coaster
on a bed next to a pair of glasses and an open book.]

For the first time in what felt like months, Draco woke up warm.

His wand wasn't yet vibrating with his morning work alarm, so Draco allowed himself to luxuriate in the perfect temperature of the sheets and blankets currently cocooning his body. He stretched and rubbed his face against the pillow, the rich scent of fresh coffee filling his nostrils. It was the tantalising smell that did it—these days, if he wanted coffee in the morning, he had to make it himself—bringing back the previous night's activities in a dizzying rush of memories that made Draco grateful he was lying down.

He'd had sex with Harry Potter.

He'd had sex with Harry Potter, and he stayed he night.

"I can practically hear you panicking over there," said the man in question from somewhere above Draco. Draco groaned and rolled over.

"I think panicking is a perfectly reasonable reaction, thank you very much," Draco replied as he opened his eyes. Harry was standing next to the bed, his face almost directly above Draco's, looking sleep-rumpled and entirely too captivating. His expression was some cross between fond amusement and cautious hope, and Draco's stupid heart leapt at the sight of him.

"Here," Harry said, shoving a steaming cup of coffee towards Draco. "I dumped a bunch of milk and half a ton of sugar in it, so it should be palatable."

Draco sat up in bed and took the cup gratefully, ridiculously touched at the gesture. He drank a generous gulp—it was indeed palatable—and gave Harry a thorough once-over, appreciating the sight of his… Partner? Lover? Friend?... clad only in a pair of tight black pants. Draco's cock stirred.

Harry shifted his weight between feet, his expression somewhat sheepish. "Well, the thing is, you've seemed so tired these past few weeks, and I couldn't bring myself to wake you when you looked so peaceful. So I might have turned off your alarm when it went off earlier."

Draco managed to muster up a glare, but he couldn't find it in himself to be properly indignant—it was hard to be moody when he felt so incredibly well-rested for the first time in ages. "So we're going to be late for work, then?"

"Not exactly," Harry hedged. "I mean, not if we hurry.

Draco sighed. "Do I have time for a shower?"

"Should do. We've got a half hour." Harry hesitated, his cheeks reddening before he continued, "We could share, if you wanted? Save time."

Draco's lips twitched into a smile. "A big house like this, and you're telling me there's only one shower?"

Harry grinned at him. "'Course not. But the taps are awfully fussy. Could take you ages to get the temperature just right."

Draco had to admire his dedication. They really did need to talk, but Draco wasn't entirely sure how that conversation would go. If they ended up deciding that last night was best left as a one-off… well, Draco thought he might as well make the most of the situation and try and squeeze one final orgasm out of the deal.

"All right then," he agreed. "Why don't you go get those taps flowing to the perfect temperature. I'll finish up my coffee and meet you in there."

Harry beamed and practically skipped to the bathroom—which was both adorable and flattering—leaving Draco alone with his cuppa and his thoughts. It had been nice waking up in Harry's bed this morning, seeing Harry's smiling face first thing when he opened his eyes. He could get used to it. Which was part of the problem.

Because Draco did feel so much better than he had since he'd come to Britain in the middle of winter; he was no longer quite so freezing and exhausted, and even his magic seemed to be more robust. If he concentrated, he could feel the beginnings of a connection singing between him and Harry, and he didn't think that was just him being fanciful.

Last night had triggered the first stirrings of a Mate bond.

It was clearly in the early stages, more a signalling of potential than anything else, but if fostered it would strengthen into a proper bond. He'd never wanted a bond, had railed against it for years, but now that the possibility was there, with Harry… Draco hadn't known just how good it would feel, how right, how much more like himself he felt just by having that tether. He'd not realised how much he'd been drifting these past ten years without it. And the bond was barely even there. How much better would it feel if they pursued it, welcomed it, if Draco really allowed himself to bond with his Mate?

He wanted it, and that terrified him. Because he couldn't see how Harry would possibly agree to it. How could Harry want to be so constrained? So quickly and completely tied to Draco Malfoy? Yes, they'd become friends of a sort, and Harry clearly liked Draco, was very obviously attracted to him, but hot sex and friendship were a far cry from a Mate bond. Even people without all the baggage that he and Harry had usually dated first. But Draco didn't think that would even be an option for them. The bond had formed quite spontaneously, with no urging on Draco's part, and he didn't know that he could pause the process while they casually dated and figured out how they really felt about one another. Yes, he could sever the bond altogether—though the thought of butchering the fledgling bond made him instinctively recoil—but he didn't think he could prevent it from continuing to grow or reform. His feelings for Harry were too strong.

Draco supposed he shouldn't be surprised that this, like everything else seemed to be when it came to Harry Potter, was all or nothing.

And Draco couldn't blame Harry if he chose nothing, but the thought of it was a shard of ice in Draco's chest. He knew he needed to lay out all his cards, needed to make things clear for Harry so that Harry could make an informed decision, but maybe Draco didn't need to do it just yet. There was still a bit more time. Hell, for all he knew, Harry would be telling him shortly that this was all a mistake anyway. He might never even need to mention the potential for a mating bond at all.

"Shower's ready," Harry called out from the bathroom, just audible over the rushing water. "If you don't want to be late you'd better get your arse into gear."

Draco downed the rest of his coffee and got himself out of bed, the promise of a wet, naked Harry Potter much more alluring than his previous train of thought.

The reality was even better than expected.

Harry's head was thrown back under the spray, tanned arms raised as he washed sudsy shampoo from his hair. Draco stripped quickly as he watched water trail down Harry's collar bones and stomach, clinging to the wiry curls of his pubic hair and dripping off the tip of his half-hard cock. Draco's mouth watered at the sight, his arse clenching as he remembered the feeling of Harry inside him just last night. Harry twisted as he reached for the soap on the shelf behind him, giving Draco a glimpse of his truly enviable arse, and Draco's cock throbbed as he thought about getting a go at it himself. Harry had seemed up for anything last night, like he wouldn't have even blinked if Draco had asked for the world. Nobody had ever looked at Draco like that.

He didn't want to have to give it up.

But no, he wasn't thinking about that, not right now. He had a beautiful man waiting for him in the shower; everything else could wait.

"Took you long enough," Harry said as Draco pressed up behind him, ostensibly to reach for the shampoo, but mostly just to feel Harry's wet, naked back against his chest. Draco's erection prodded the small of Harry's back, tantalisingly close to the firm globes of Harry's arse. Harry arched and rubbed back against him, tempting and maddening, and Salazar, if only they had time for a proper fuck.

"Turn around," Draco commanded—asked, begged—mouthing along Harry's nape. Harry didn't hesitate to comply, turning and wrapping his arms around Draco's neck, kissing him for all he was worth. Their water-slick bodies slid together, the heat building between them just as quickly as it had the night before.

"Wish we had more time," Harry said between kisses. "Fuck, I want to do everything with you."

Hope leapt in Draco chest at Harry's words, hope that maybe this wouldn't be the last time they did this, that maybe Harry was falling just as quickly as Draco was, that maybe the Mate bond wouldn't put him right off. It wasn't like Harry didn't know what Draco was, hadn't been learning all about his kind and what they needed. Perhaps he wouldn't even be that surprised.

"Later," Draco replied, feeling both daring and exposed at the implication of that one word. "This will have to do for now." With that, he grabbed hold of his and Harry's cocks in one hand, encouraging Harry to do the same, the two of them creating a tight, wet space for their cocks to thrust into. It was sloppy and a little uncoordinated, but Draco didn't care—it was still blisteringly hot. Harry seemed equally entranced, gasping wetly against Draco's cheek as he got closer and closer to his release.

It didn't take long at all before they both came, first Draco and then Harry, close enough that Draco's cock hadn't even begun to think about oversensitivity. Their release circled down the drain before Draco had a chance to properly appreciate the way it looked spattered over Harry's golden skin—a pity, but at least the shower made for a quick clean-up. They stayed entwined under the spray for a little longer, Draco eager to remain in this hot, steamy bubble they'd created for themselves for as long as possible.

Unfortunately, the unmistakable blare of an Alarm Charm sounded from the bedroom, and Harry pulled away with a grimace.

"That's the ten-minute warning," he said, stepping out of the shower and reaching for a towel. "We better finish up if we want to be on time."

Draco very much wanted to tell Harry he didn't give a flying fig about work at the moment, but then he remembered the very important, very time-sensitive case they were supposed to be solving right now. He gave Harry a curt nod, and he didn't think he was imagining the wistful look in Harry's eyes as he nodded back.