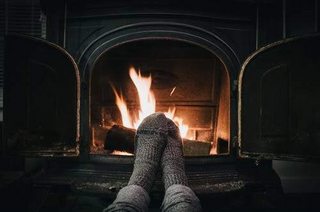 [IMAGE: A pair of feet in thick grey socks in front of a lit fireplace.]

"I'm just not buying it," Harry said with a shake of his head as he leaned back in his chair and put his feet up onto his desk.

"What? You think Jasper was lying about having to meet with a client yesterday?" They'd just finished interviewing Jasper who had sullenly arrived at the Ministry at half-past ten that morning. He worked as a sculpturist, and apparently a wealthy and rather demanding patron had commanded his presence yesterday. According to Jasper, the money he brought in from his work was vital to the running of the Aerie, and he couldn't afford to lose such a loyal client, no matter how temperamental. "Seems like a stupid risk. We have the name of this patron of his. It'll be easy enough to verify his story."

"No, I don't necessarily think he's lying about that, but it does seem awfully convenient. He might have exaggerated his inability to reschedule."

Draco shrugged. He certainly didn't like the bloke, but he seemed like just your garden variety disliker of Draco, hardly an unusual breed. Harry seemed to find Jasper's animosity towards Draco more upsetting than Draco did, which he tried very hard not to find endearing and attractive. It had been a long, long time since somebody had cared enough about Draco to get offended on his behalf. Especially given the fact that, with all Draco had done, he wasn't exactly undeserving of people's ire.

"But what's the motive?" Draco finally asked. It was the one big thing that kept bothering Draco. He had a feeling that if they could just figure out what was driving the Veela to go Fury and kill these men in the first place, then everything else would fall into place

Harry looked thoughtful. "Well, I've been meaning to ask… Jasper and his Mate are having issues, yeah? Could that be affecting the Mate bond? The whole thing with the bond is that it's supposed to be stabilising, but if the bond itself is under duress, couldn't that have a negative effect? Maybe the tension between Jasper and Kiara is undermining the bond."

That made Draco pause. He knew, of course, that Veela could separate, but it was fairly rare, and Draco hadn't ever encountered a mated couple that was in the middle of a rough patch or break-up. He didn't know how that would affect the bond, but he supposed it was logical to assume there'd be consequences.

"That… is definitely a possibility. If Kiara and Jasper are less stable than a normal mated pair, then they certainly would be more likely to go Fury if properly provoked."

"At least two of our victims were hotheads according to their friends and family," Harry said, clearly warming to the idea. "And another was a little too free with the booze. It's not totally crazy to think they all might have got into some kind of altercation with Jasper."

"And the fourth?" Draco asked. "The older gentleman?"

Harry made a face. "Well, we can assume based on the potion he consumed that he was out either meeting somebody for sex, or hoping to find a sexual partner. We know he was married to a woman, but that doesn't necessarily mean he was straight. Maybe he propositioned Jasper? If Jasper is less grounded because of a wonky mating bond, he might also have less control of his Allure."

"And even without the Allure, Jasper's an objectively attractive man," Draco added grudgingly. His stomach fluttered at the brief flash of disgruntled jealousy that crossed Harry's face at Draco's comment.

"I guess, if you like that sort of thing," Harry muttered.

Draco raised a brow. "Tall blonds with amazing bone structure? Can't say that's my type personally, though I can certainly appreciate his… assets."

Harry's cheeks flushed the colour of his Auror robes, and he tore his gaze away, mumbling something indistinct under his breath.

Merlin, it was getting harder and harder to be around Harry, to be so close and unable to touch. They had a case to solve, and time was running out, and all Draco could seem to see was Harry, lovely and warm and too far away. It was a massive distraction, and a soft, seductive voice had begun to whisper in his ear that maybe it would be better for their focus if they were to just give in and fuck, blow off some steam and dissipate some of the tension brewing hot between them. But no, that was just his dick—and his Veela instincts—talking. He was better than that. He had control.

He only wished it wasn't so bloody cold.

The brief reprieve he'd experienced this weekend seemed to have been a fluke, and the past two days had found him colder than ever. All he wanted to do was go home and wrap himself up in a big blanket by the fire, put his feet up and rest. He felt frayed, the hold on his normally iron-tight control tenuous and slipping. It terrified him, and he'd taken to spending his nights after work curled up by a roaring fire with any book on Veela he could get his hands on, trying to determine if there was a solution to his predicament that didn't involve trying to trick somebody into agreeing to be Draco Malfoy's Mate.

"Well," Harry said, pulling Draco from his thoughts. The redness in his cheeks had faded somewhat, though it didn't make Draco want to kiss him any less. "Shall we go pay a visit to"—he looked down at the notes they'd taken during their interview with Jasper—"Raymond Carmichael and confirm Jasper's story about his whereabouts yesterday?"

Draco nodded. He wasn't looking forward to leaving the chilly Ministry for the even icier outdoors, but with any luck, Raymond Carmichael would be the rich, decadent sort who'd spent a fortune to set their Temperature Charms on high. All that blue blood tended to make the aristocracy just as cold physically as they were emotionally, in Draco's experience.

"After you," Draco said gallantly as he stood. And if he stared a little too intently at Harry's perfect arse as he led the way out of their office, well, he wasn't made of stone. He might be committed to not giving in to the desire that pulsed between them, but looking was another matter entirely.

Short chapter today, but tomorrow's is a big one... :D