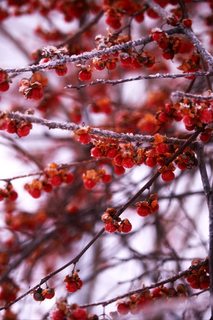 Draco had been staring at the case board in his and Harry's office for what felt like hours, willing his brain to make a connection between their victims. They were all male, all wizards, and all found murdered in the same brutal way within the same small, magical town. But everything else—marital status, socioeconomic background, profession, and age—was different.

He scowled, tearing his gaze away from the board and staring out the faux magical window instead. Today, the view was filled with a tree, its delicate branches laden with bright red berries that were crystallised with frost. Snowflakes drifted past in slow, gentle flurries, and though Draco knew it was just magic, that there was no frozen wonderland just outside their office, he felt cold all the same.

Harry was currently in the lab with Clearwater, being briefed on what she'd shown Draco earlier that morning before Harry got in—that the victims' wounds indicated that it was the same perpetrator in all three cases—and Draco was grateful for his absence. It meant Draco could cast another Warming Charm—his third that hour—without Harry's sharply observant gaze.

Draco cast the spell, relishing the sudden warmth that kissed his exposed skin. He tried not to worry about the fact that the charm seemed to be wearing off more and more quickly, tried not to wonder if he was just imagining that the air didn't seem quite as heated as it had when he'd cast the same spell yesterday. He'd not even been back in England for a full two weeks! Surely the winter air couldn't be affecting him that quickly.

No, it was just Harry's recent questions about Mates that had Draco obsessing over the subject. Draco had shared quite a lot with him, but not everything, and he wondered how much Harry had begun to put together. Draco had spoke of the bond, the sharing of abilities, but he'd not really touched upon the consequences of not having that mating bond to "complete" a Veela. It wasn't just the evened temperament and greater emotional control. Without the augmented magic from the bond, his body, not built for this cold weather, would be unable to fully sustain itself.

At least, that was the line Draco had been fed, but Draco refused to believe it. Hadn't he survived a winter here after he'd manifested? It had been difficult, miserable, but Draco maintained that had more to do with the war and his desperation to do whatever he could to keep the Dark Lord from finding out his secret. Yes, he'd been weak by the end of the war, his body all skin and bones, his magic shaky, his control so frayed that he'd snapped and gone Fury with the barest of provocations while in Auror custody. But nobody could possibly think to blame that on him not having a Mate, not after everything he'd been through that year.

When Draco had mentioned that very fact to the Matriarca, she, of course, had a rebuttal ready. She claimed that the older Draco got, the more energy his body would burn through, and the more vital a Mate would become. Draco thought this explanation was awfully convenient, and it stunk of hippogriff shit to him. He refused to be threatened into tying his soul to another's, no matter how temporary, not for any reason.

The thought of letting somebody that close to him—not so much physically, as Draco had been far from celibate these past ten years—but mentally, emotionally, magically… Just the thought made Draco shudder and recoil. He wasn't sure he had it in him to ever trust somebody that much, to allow himself to be so vulnerable. Draco knew exactly what people were capable of, and the thought of becoming reliant on another person for his survival, on needing their magical support just to function…

A shiver racked Draco's body. No, it wasn't an option.

"Hey!" Harry popped his head in through the open doorway, his hair messy and windswept, as if he'd just come from outside instead of from down in the labs. "I'm running to grab some coffee from a proper coffee shop—I can't take another cup of the Ministry's swill today—and then I figured we could go over Clearwater's information. Did you want to come with?"

Draco heart leapt, and he did want to go with. He was increasingly aware of how attuned he was becoming to Harry, the way he always knew exactly where Harry was in a room, the way he was constantly seeking Harry out. Draco enjoyed Harry's company, liked the way his brain worked, liked that he challenged Draco. Harry smelled good, and he looked good, and he seemed to find the fact that Draco was a Veela to be something awe-inspiring instead of something shameful. He had all the makings of an amazing partner—an amazing Auror partner—and that was all it would be. All it could be.

"I want to finish some work up, actually, but if you wouldn't mind grabbing me something while you're out?"

"Yeah, sure thing." Was Harry disappointed that Draco wouldn't be joining him? Relieved? Did he care at all? Draco couldn't tell. "Large caramel white mocha?"

"You've got it. Back in fifteen," Harry said with a grin, brighter than the summer sun and just as warm on Draco's skin.

Draco couldn't lie—not to himself at least—about his feelings for Harry, the ones that were starting to move beyond platonic. It was impossible not to notice the heat he felt in Harry's presence—not just the metaphorical heat that stirred lust in his veins, but a real, tangible heat that circulated through his limbs, leeching away some of the exhaustion and chill. It was another reason why his feelings for Harry couldn't be trusted. Were they real, or was his biology doing its part to urge him towards the closest warm body, hoping for a Mate bond? He didn't think his nature was actually capable of influencing his own emotions, but he did know that it was capable of influencing others with the Allure. He kept a tight rein on the ability, but it was always there, lurking beneath the surface, and if he really was losing some of his control, who knew how long the barriers he'd placed on it would hold? If, by some miracle, Harry's feelings for Draco were beginning to change as well—and the way that Harry sometimes looked at Draco made him think that they were—how could Draco ever trust that those supposed feelings of Harry's were real? Maybe Harry could forgive Draco enough to work with him, to become his friend, but with their history, surely anything more was completely out of the question.

Which was fine. It was how it should be. Draco had already decided he didn't want a relationship, didn't want a Mate. He'd grown used to ignoring the itch beneath his skin that begged for touch, for love and family and companionship. Those things were beyond Draco, out of his reach, and that was fine.

He turned back to the case board and met the accusatory gazes of the three victims.

They, on the other hand, were not fine, and it was Draco's job to figure out what connected these three men together, what had made them a target. Draco didn't have time to bemoan his loneliness.

He had a killer to catch.