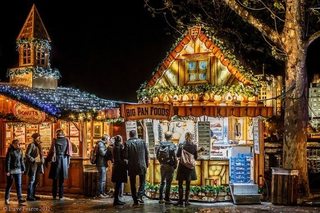 "What time is our Portkey to Aingeal Tine again?" Harry asked as his stomach growled. It was only half-past eleven, but he was already starving; he was hoping there'd be time to pop out and grab a proper lunch before they had to leave.

"One-fifteen," Draco replied promptly. He looked tired—Harry wasn't sure if he'd seen Draco ever not look tired since he'd returned to England—his eyes bloodshot and his back slumped. It made Harry want to pull him into a hug, made him want to bundle Draco in blankets and set him before a fire with a cup of homemade chicken soup.

He settled for asking Draco to lunch, instead.

"Great, that gives us plenty of time to head over to the little market they've set up in Diagon—I've been dying to try some of those food stalls."

Harry willed himself not to blush. "Sure, if you're hungry? Who knows how long we'll be up at the Aerie, so it's probably good to fill up before we go."

They walked in companionable silence to the Atrium before talking the Floo to the Leaky Cauldron and making their way into Diagon Alley. Draco was stiff and tense beside him, and Harry thought maybe that, too, was a product of his exhaustion. But then he noticed Draco's guarded expression, the alert way his eyes seemed to take in their surroundings, constantly bouncing from person to person as they passed. Harry wondered if this was the first time Draco had been to Diagon since his return. For the most part they were ignored, though Harry couldn't help but notice they were given a wide berth, a consideration Harry was rarely afforded as the Chosen One. It was clear it was Malfoy they were avoiding, though whether it was because he was Veela or because of the Mark on his arm, Harry wasn't sure. He couldn't blame them for one; the other, he very much could.

They joined the queue for a stand mysteriously called Big Pan Foods. Harry had no idea what kind of food they sold, but based on the massive queue, it must be good. "So," Harry began. He fished around in his brain for some topic that would absorb Draco's attention and distract him from his obvious discomfort. "Tell me more about this Mate thing."

Harry's cheeks immediately grew warm—that had not been something he'd planned on asking Draco about. Not that he wasn't fervently, desperately curious—he'd been frustrated yesterday when Robards had stuck his head into their office demanding an update on their case mere seconds after Draco's intriguing statement about Mates. It had effectively cut their conversation short, and Harry hadn't been able to think of a way to subtly bring the topic back around. Apparently, his mouth had decided to hell with subtle, and thought blurting it right out instead would be a much better approach.

"What?" Draco looked startled, but his expression had lost some of the wary, hunted quality it had sported from the moment they'd stepped into Diagon, so Harry decided to continue with the line of inquiry.

"Well, we were interrupted yesterday before you got around to telling me why all the Veela are so keen on having you find a Mate. Is it like, a predestined thing? I've read"—Harry coughed—"I mean, seen, all those cheesy romances with Veela and Werewolves finding their one true soulmate, but I sort of thought that was a load of rubbish."

Draco gave Harry an amused look that told him he hadn't missed Harry's slip up—he was a trained Auror, after all. Harry shrugged and gave Draco a sheepish grin; everybody needed a guilty pleasure.

"You're right," Draco replied. "The predestined Mate thing is total crap, at least when it comes to Veela. We have just as much autonomy as humans when it comes to choosing a life partner."

"Oh, well, that's good, then." There was absolutely no reason for Harry's stomach to dip in disappointment. He'd already had his full share of prophecies and his fate being decided without his input, thank you very much. Though the idea of having someone who was destined to be his perfect match did sound kind of romantic if he didn't think about the particulars too hard.

Draco's smile was wry. "Quite."

"All right, so if you get to choose the person, what's the big deal?" Harry's expression grew more animated as he looked at Draco, his enthusiasm for the subject growing. "Ooh, is it some kind of permanent bond thing? Once you pick somebody are you stuck together forever?"

"Wow," Draco said, his voice brimming with mirth. "You really do read a lot of those trashy romances, don't you?"

"Eloquent," Draco said primly. "But no, to answer your truly ridiculous question, the Mate bond isn't unbreakable. What a horrible thought. In practice, the process of finding a partner isn't really all that different than it would be for you."

Harry wasn't sure why Draco's words made his belly flip. Maybe it was because his own attempts to find a "Mate" of his own had been rather abysmal.

"Okay… so I'm still not seeing the issue. And why are Veela so obsessed with you being in a monogamous relationship if it's no different than a relationship between humans?"

"I didn't say it wasn't different," Draco said with a roll of his eyes. "Just that the process of finding a Mate is much the same. And though most Veela are monogamous, it's actually not completely unheard of to find Veela in polyamorous relationships, though never an open one. Poly Veela are certainly not the norm though, as all parties need to have an equally strong bond with every member of the triad. Veela really are terribly jealous and territorial, so it can get quite messy if that's not the case."

"Oh," Harry said, his stomach squirming uncomfortably. "Is that the issue, then? You want, erm, more than one partner?"

Draco gave Harry a strange look, and then shook his head. "No," he said softly. "That's not the problem."

Harry growled when it appeared that was all Draco was going to say on the matter. "Merlin, it's like trying to get blood from a stone with you. You've got to tell me what the issue is now. I'll die of curiosity!"

Draco actually laughed at that, a bright, tinkling laugh that surely had to be some product of his Veela heritage, because Harry hadn't ever heard such a beautiful sound in all his life. He stared, awestruck by the sight of Draco's face creased with honest pleasure, the winter sun making his fair hair glow like a halo.

"Who knew Harry Potter was so bloody nosy!"

"Pshh, anybody paying attention could tell you that."

They made it to the window of the stall, and Harry groaned at facing yet another interruption, though he really was hungry. He glanced over at the menu board—apparently Big Pan Foods sold various kinds of paella—not exactly what Harry thought of when he heard "Christmas Market", but it did sound bloody tasty. He and Draco both ordered the Seafood and Meat Paella, which came in big white styrofoam cups, before stepping out of the queue. By silent agreement, they decided to return back to their office and eat there, where it was warm and there were no prying eyes.

No sooner had they sat down at their respective desks did Harry open his mouth to demand answers, but Draco beat him to it.

"All right, all right, hold your hippogriffs! Let me take a couple of bites first, and then I'll tell you more about Veela Mates."

"Okay," Harry said, pointing his plastic fork at Draco. "But don't think I won't hold you to that!"

He was still starving, so he took the time to dig in himself, unable to suppress his moan of pleasure at the first bite of soupy prawn and rice. Harry was nearly half-finished with his container when Draco spoke again.

"Veela don't have predestined soulmates, and the Mate bond isn't unbreakable, but it is a bond. There's a Veela ceremony that often goes with it, but that's just window-dressing—the bond itself is more… spontaneous." He absently prodded at the edge of his styrofoam container with the prongs of his fork, making small indents in the spongy material as he continued, "Like so much about Magical Creatures, there's a lot we don't know about how, exactly, the bond is initiated. Wizards haven't deemed us important enough to study, and Veela wouldn't trust wizards enough to let them conduct those studies, anyway. But Veela, of course, have their own beliefs and legends. Essentially, the idea is that if two Veela get together and have a strong enough affinity for one another, and are serious about the relationship, a Mate bond will form. Once it's formed, it needs to be strengthened and nurtured to flourish and reach its full potential."

"Can the bond only be between two Veela?" Harry asked before taking another large bite of paella, hoping that Draco was too absorbed with his own meal to notice Harry dribble all over his desk as he ate.

"No, but it's generally encouraged to keep bonds between Veela, as they'll have a similar understanding of needs. For child-bearing couples, it increases the likelihood of creating more Veela. While it's more common for two Veela to mate, it's not taboo for a Veela to mate with a human or even another Being."

Harry should not have found the fact that it wasn't taboo for Draco to mate with a wizard so very, very compelling. He coughed. "So what exactly does this bond do?"

"Essentially, it balances a Veela. Veela believe that part of our… passionate and volatile nature is because we're incomplete as individuals… unstable. A mating bond connects our essence with another's and brings a Veela's soul into alignment."

"Is that what Aderyn meant when she said all her Veela were properly anchored and unlikely to go Fury?"

"Yes," Draco said, his expression twisting with some complex emotion Harry couldn't quite place. "She meant that all of the Veea currently staying in the Aerie are mated, and thus considered whole. I've never been mated, so I can't say for certain, but Veela maintain that a Mate bond helps with the regulation of emotions and it makes it more unlikely that a Veela would lose enough control to get to the point of Fury involuntarily."

"Is that all?" Once again, Harry sensed there was more to the story.

Draco gave him a wry smile. "No, that's not all. The bond also enables a moderate sharing of magical power. Mated pairs can draw upon one another's strength, or rather… it's more like both of their magical cores are magnified to a small degree. A whole that's greater than the sum of its parts."

Harry tapped his plastic utensil against the edge of the styrofoam container. "Could that be relevant in our case? If it was a mated Veela pair that committed these murders, they'd be stronger than the average Veela, yeah?"

Draco wobbled his head back and forth indecisively. "Yes and no? Not to the point where it would make much of a difference in this case. Once a Veela hits Fury, they're difficult to contain, even if unmated."

"You said it's less likely that a mated Veela would be driven to that point, though… Can you think of a scenario that might get them there?"

"Like people, Veela all have different triggers and soft spots. But one thing that would almost always get a mated Veela's wings up would be a threat against their Mate."