John had a fourth son. Achilles Milligan-Winchester, Adam's twin brother. Thing is, Achilles hates being a Winchester, and he wants to make them pay one day for what they did to Adam and Kate. But first, you should know his story before you label him a villain.
I DO NOT OWN SUPERNATURAL. I ONLY OWN THE OC ACHILLES WINCHESTER

Chapter 1: It all falls down 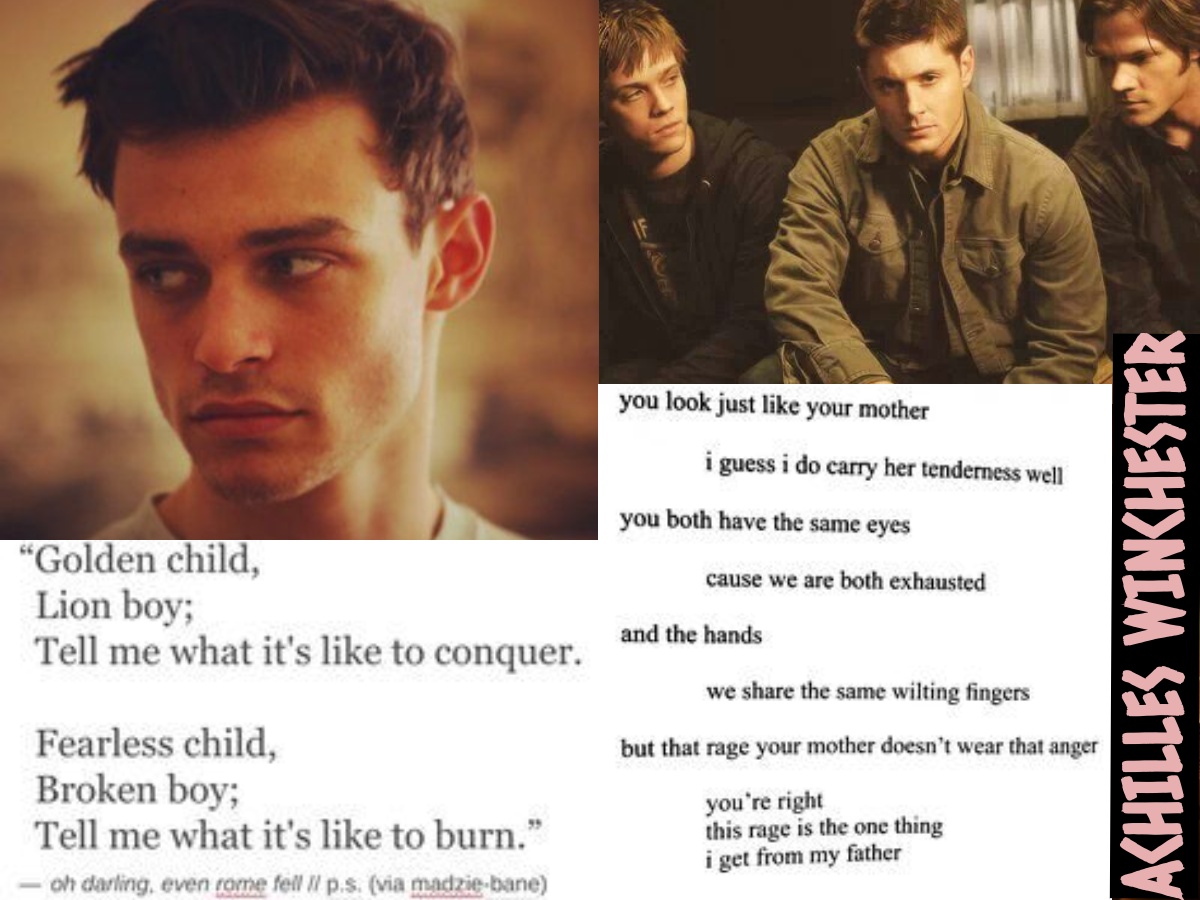 I can say with absolute certainty that you have never heard of me.

I believe, if you are reading this, you've heard of my despicable half-brothers, Sam and Dean, my deadbeat father John and perhaps even my beloved twin brother Adam, but you are confused.

Y ou do not know who I am or what you are reading.

Many people have forgotten that even my twin existed, and because of that he still burns with an archangel in the darkest part of hell.

Well, stranger, welcome to my story.

Adam sat on my bed watching me pack for college.

"You know, you could help instead of just watching me, dickhead." I suggested, sitting cross-legged on the floor with a suitcase open beside me.

"Nah, more fun to just watch you, ya asshole." He grabbed one of his books and flipped it open.

"Ads, can you toss all my books into a box?" I inquired, folding some tee shirts into a neat pile.

"You could just go shopping for more once we settle in." Adam huffed, doing as I asked.

We were sharing an apartment together since we'd be attending the same college, and we'd been saving up for years to pay rent.

"Did you order the furniture?" I demanded.

"No, Mom did." Adam replied cheerily.

He was going into medical school while I was pursuing Mythology, Theology and Ancient History.

Being named after a Greek demigod gave me an inborn love of myths and lore, although when John showed his face, he attempted to lead me elsewhere, into something 'normal' like what Adam was doing. I refused.

He didn't come back, and Mom's friend Officer Hale called me, telling me two men had shown up claiming to be Adam's half brothers, and by relation, mine, and then Adam and our Mom had vanished off the face of the earth, and the men had vanished too.

I dropped out of school, packed up all the shit in our empty house and sold the place.

Mom and Adam's remains were only enough to say they were dead, not to bury.

Tyler stayed with me the whole time. We'd both lost Adam and Mom.

I tried to avoid people as I prepared to leave town, not even bothering to try calling John or the guys that claimed to be his sons.

"'Chilles, you don't have to go. Dad said you could stay with us." Tyler pleaded.

"I have to go Ty. There are too many memories. I can't stay here." My voice was rough from crying and refusing to speak for the past few days.

Tyler sighed and pulled me into a tight embrace. "Keep in touch. Please." He whispered.

He watched me get in my car that I had once shared with my twin and drive away, hellbent on leaving my old life behind.

You know, by now I'm used to waking up in an unfamiliar motel room with a hot guy, but for once, I'm not hungover, and I know for a fact I was alone when I went to sleep. Also, nobody calls me Achilles Winchester.

I whipped out a knife that, yes, I usually kept under my pillow, (Hey, when your family is killed by ghouls, you'd have a knife nearby too) and backed up into the wall.

The short man in front of me was cute, with whiskey eyes and golden hair, and a smile that advised me to check my pockets for anything missing.

"Who the fuck are you?" I demanded.

"Call me Loki." He shrugged, popping a sucker into his mouth.

"Like the Norse Trickster god." I recalled. He grinned.

"You know your stuff." he tilted his head. "I guess you would, being named Achilles."

I slowly lowered my knife. "Okay, what the fuck are you?"

Recap, yes, I know about the supernatural. Apparently John had a thing for hunting them that he dragged my half brothers (ugh) into, and my lore courses were a really great asset for me.

"I'm a friend." Loki replied after a moment's hesitation. "Look, Achilles, I want to protect you. Your brothers get into a lot of shit, and it got Adam killed. I don't want it to get you killed."

I scoffed. "I've learned that I do better on my own, Loki."

He sighed. "I figured you'd say that." He snapped his fingers and I passed out.

fsxzuck as well as 5 guests left kudos on this work! (collapse)