Castiel’s eyes snap open with the first note that carries through his bedroom wall. The sound of running water accompanies it shortly thereafter and a smile breaks across Castiel’s lips as he closes his eyes, stretching his arms high above his head. He glances over at the red light of his alarm clock, noting the time. 6:30 AM, just like yesterday. Castiel swears his cute neighbor has his life scheduled down to the minute.

Dean and Castiel live in adjacent apartments and the walls are very thin.

Someone needs to get me wine and nachos because apparently my subconscious needs them. 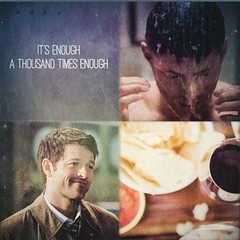 Castiel’s eyes snap open with the first note that carries through his bedroom wall. The sound of running water accompanies it shortly thereafter and a smile breaks across Castiel’s lips as he closes his eyes, stretching his arms high above his head. He glances over at the red light of his alarm clock, noting the time. 6:30 AM, just like yesterday. Castiel swears his cute neighbor has his life scheduled down to the minute.

It used to annoy him to no end—the rude awakening half an hour before his alarm was set to go off—but Castiel learned that the extra half an hour was enough time to stop for a coffee before work, so—though he’ll never tell his neighbor—he’s actually thankful for the obnoxiously good singing so early in the morning.

This morning in particular, though, there’s something different, and his ears perk up at the familiar tune. He sits up in bed, tilting his head to the side to listen closer to the muffled music. Definitely Zepp, Castiel thinks, and pushes himself to his feet, his heart pounding in his chest as he presses his ear to the wall.

His cute neighbor doesn’t sing at first, but his humming carries through the wall, and Castiel listens intently, a smile on his face and butterflies fluttering like mad in his stomach.

Then he starts to sing, and Castiel thinks he might be in heaven. He’s just picturing his cute neighbor naked as the day he was born—water sluicing over him—singing Led Zeppelin’s Stairway To Heaven. He could die a happy man after this.

Maybe it’s the song, or maybe it’s the memory of how Castiel’s heart pounds every time he passes his neighbor in the hallway, but in that instant, he feels like he has all the courage in the world.

Castiel shakes his hands out as he waits for the other man’s voice to quiet down again. His heart races now, and the back of his neck tingles with anticipation. When the music builds again, he takes a deep breath and belts out the lyrics, loud enough so his cute neighbor can hear. “There's a sign on the wall. But she wants to be sure. ’Cause you know sometimes words have two meanings. In a tree by the brook. There's a songbird who sings. Sometimes all of our thoughts are misgiving.”

Castiel waits for a response, the grin on his face wide and excited, but the other voice cuts off in an instant, as does the music, and Castiel’s smile falls from his face as disappointment sinks his stomach.

He waits and waits and waits until the shower turns off and nothing else comes from the other side of the wall. Still, he waits right up until he hears his cute neighbor’s front door close and the elevator ding.

With a heavy sigh, he drags himself into his own bathroom for a shower and a far less musical one at that.

Castiel’s been sitting at his desk for forty-five minutes, staring at a blank screen as this morning’s fiasco runs on a loop through his head. God, I can never meet him in the hallway again, he thinks. It’d be too embarrassing—he might just spontaneously combust with humiliation if his cute neighbor were to bring it up. His face burns hot just thinking about it.

“What’s up, buttercup?” Charlie asks as she plops herself down on the edge of his desk. Castiel sighs as he leans back in his chair with what he knows is a hopeless look in his eyes. “Aw, what’s wrong?”

“I’m an idiot,” Castiel pouts as he twists his chair back and forth. “A stupid, embarrassing, idiot.” He can’t even look at her, it’s too embarrassing.

“What happened?” She leans closer, her eyes scanning for any eavesdroppers, before she whispers, “Was it the cute neighbor? Did you finally ask him out?” Excitement practically radiates off of her as she shimmies, a little squeal escaping her lips, and Castiel rolls his eyes—obviously, she missed the part where he’s an idiot.

“No,” he snaps, turning back to his dark screen and wiggling the mouse to wake it up. “I sang to him through the walls.” It’s barely a murmur, and Charlie leans closer.

“What’s that?” She tucks her fiery hair behind her ear and tilts her head.

“I sang to him through the walls,” he grates, and when a burst of laughter escapes her, Castiel glares.

“Oh, honey, no.” She reaches out to ruffle his hair and he swats her hand away, annoyed with the pity he can see written all over her face.

“Honey, yes. He stopped singing immediately and turned off the music.” Castiel crosses his arms over his chest and pouts like a child. “It was embarrassing and I’d really rather just forget the entire thing happened.” With that, he pulls up his files and gets to work, leaving Charlie to find her way back to her own desk, but not before she kisses his cheek and ruffles his hair. He swats her away again—he’s not a child.

Castiel drags his feet down the hallway towards his apartment door. God, he’s tired, and all he wants to do is curl up on his sofa with some nachos and Dr. Sexy reruns, but the first thing he does when he steps through the door is head for the shower. Ever since Castiel’s car broke down, he’s had to walk to work, and it wouldn’t be so bad if it weren’t so damn hot outside. He feels sticky and gross and he just needs a shower.

He’s about halfway through washing his hair when the pipes creak and the distant sound of water running has him freezing where he stands. His cute neighbor is home and obviously washing the day away as well. Castiel squeezes his eyes shut tight, willing away the dirty thoughts and forcing himself to remember just how embarrassing acting on them is.

He finishes up and jumps out of his shower as fast as he can, barely toweling off before he dresses in a pair of bumblebee pajama pants and matching slippers, as well as an oversized deep-blue, knit sweater that his Grammy made him for Christmas the year before.

Castiel gets the TV set up and his nachos in the microwave—all set up for his pity party—and he’s just getting comfortable when there’s a knock on his door.

His heart leaps into his throat as he stares across the room. Could it be…? No, he wouldn’t. There’s a second knock, and Castiel jumps to his feet, figuring he should probably get it anyway.

When he swings the door open and finds his cute neighbor standing on the other side with a bottle of wine and a pizza, Castiel thinks he might just pass out.

“Hi, uh…” His neighbor’s eyes flick back and forth for a second before he tucks the bottle under his arm and holds out his hand for Castiel to shake. Castiel takes it, clasping the warm and callused palm as his cute neighbor continues to speak. “I’m Dean. Your neighbor?”

Castiel nods, still holding his cute neighbor’s—Dean’s—hand. He drops it like it's burning him when he realizes how long he’s been holding it for and stumbles over his own name. “C-Castiel. Nice to…nice to meet you.”

Dean flashes him a dazzling smile and Castiel thinks he just might swoon. “I got pizza and wine. You know, if you want to share it with me?”

Castiel doesn’t even have to think about it before the words are tumbling out of his mouth. “Yeah! Yeah, sure.” Castiel steps back to let Dean in and he walks right through as Castiel closes the door behind them. Castiel takes a minute to gather himself before turning around. What the hell is he doing here?

“I hope you don’t mind,” Castiel says, gesturing at the TV, which he paused before answering the door.

Dean glances up from where he’s setting the pizza down on the coffee table. “Oh, not at all. I love me some Dr. Sexy.” He grins and his eyes seem to sparkle—the most beautiful green Castiel’s ever seen.

Castiel heads for the kitchen to grab some plates and wine glasses, and he’s walking back when Dean speaks again.

“Nice place you got here.” He takes the plates from Castiel’s hands. “Looks kinda familiar, though.”

Castiel laughs. “I should hope so; I had them do mine to match yours to a tee.” He pours them both a glass of wine and hands Dean’s over with a smile.

Dean clears his throat and looks at Castiel from the corner of his eye. “Sorry to just come knocking. I see you ‘round here all the time and I just figured it’d be nice to hang out, you know?”

“No, no. It’s nice to have company.” That’s all Castiel says as he restarts the TV with butterflies dancing in his stomach.

They talk and drink and laugh through half a season, getting more and more drunk as they finish the bottle, then the second that Castiel pulled out of his fridge—the wine he keeps for special occasions.

It’s getting late, now, and Dean is so close and he smells so good. Castiel isn’t quite sure how they both moved from separate corners of the sofa to sharing the middle cushion, but he’s not complaining. His vision swims a little, and if he moves too fast, it takes the room a second to catch up.

“You know,” Dean starts, his words a little less crisp than they were when he knocked on Castiel’s door. “I see you ‘round a lot.”

“Yeah?” Castiel whispers, his face so close to Dean’s that his eyes are practically crossing.

“Yeah,” Dean says, nodding as he grins. “I could never get up the courage to talk to you.” His hand lifts and fingers brush Castiel’s jawline—move up to cup his cheek. “I’ve got the biggest crush on you Castiel Novak, and hearing you singing to me this morning…” He trails off, shaking his head as his fingers thread through Castiel’s hair. “I just had to come over.”

Castiel’s heart hammers against his rib cage as a hopeful smile blooms on his lips. “Really?” he asks, and Dean nods, nothing but sincerity in his eyes. “‘Cause I’ve had a crush on you since the day you moved in.”

Dean’s whole face lights up like a Christmas tree and he leans in until their noses brush and their breaths whisper across the other’s lips.

“Can I kiss you?” Dean asks, soft and sweet.

“Yes—” The word has barely left Castiel’s mouth before Dean’s lips are on his, kissing him long and deep, and Castiel gives as good as he gets, wrapping both hands around the back of Dean’s neck and holding him close.

They can’t seem to get close enough, though, and, eventually, Castiel is pressed into the cushions below, as Dean steals the air from his lungs before giving it back in the same breath.