Rey and Ben are getting ready to work on the sacred Jedi texts together, but there's just one problem: Ben insists on wearing white cotton gloves.

This is silly, gratuitous nerdiness. A colleague wrote an excellent blog post about why you shouldn't wear white cotton gloves while working with rare books (an issue close to my own heart) and I got inspired. C-3PO's lecture? Cut and pasted from the blog post, but there's so much more, you should read the whole thing.

Thanks to the Book Lickers and the booklicking-adjacent ladies (especially Allie), I love you guys.

There is a joke about Han Solo's death here, so if that's something you're sensitive about you should be aware before you start reading! 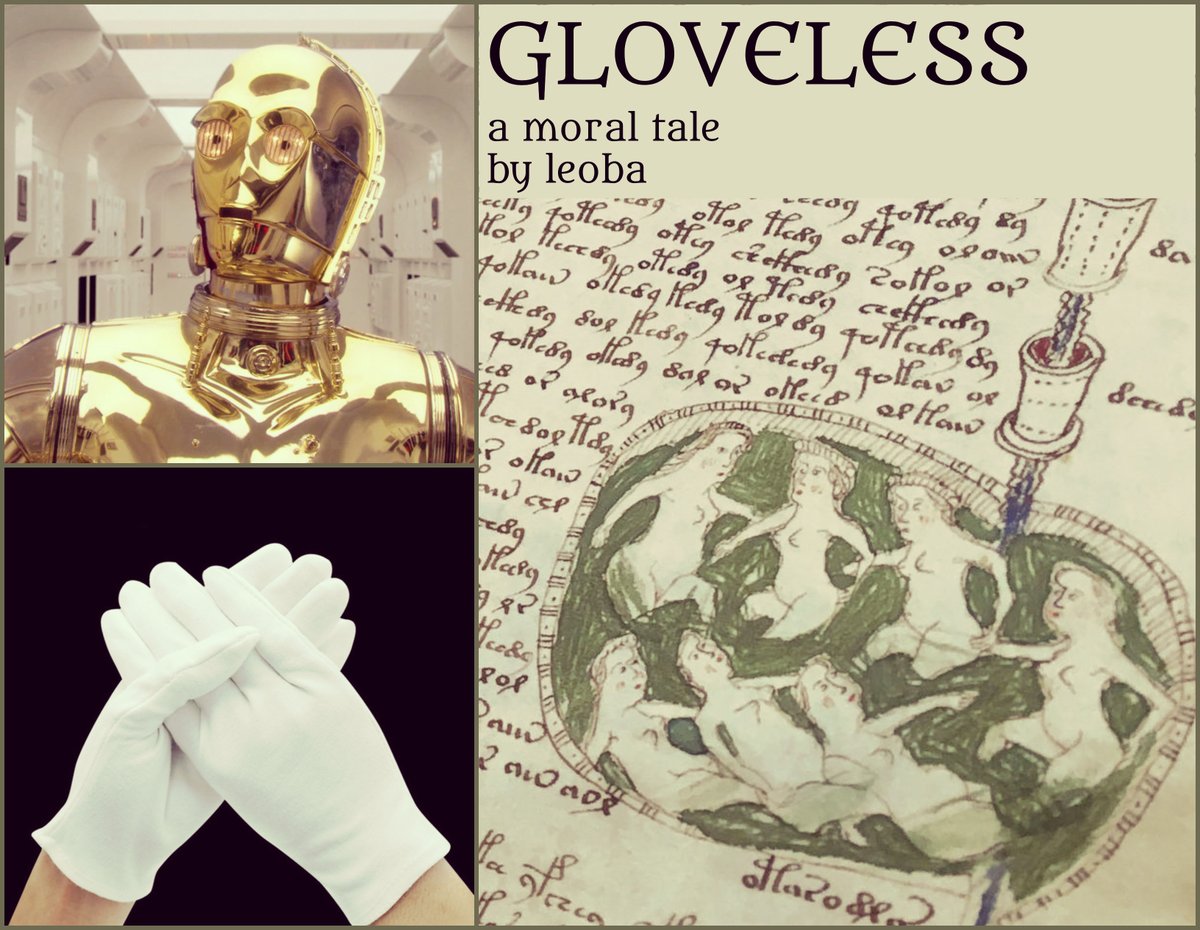 Rey stepped into her quarters, the door sliding closed behind her. She took one look at the man sitting on the sofa in the sitting room and gasped in horror. It wasn't the man who horrified her; she had known that Ben Solo was going to be there. (He had, until very recently, been known as Kylo Ren, the short-lived Supreme Leader of the First Order) They had agreed at breakfast to meet in Rey's quarters that afternoon to begin working through the ancient, sacred Jedi texts. C-3PO had been helping her for a while, but Ben said he knew the books from when he’d been studying with Luke Skywalker, and Rey had to admit she’d rather work with him than with the droid. She was late, though, and she had expected Ben to be there.

No, it wasn't Ben's presence that horrified Rey. It was what he had on his hands.

"What is that?" She demanded, quickly closing the few steps between them, snatching the book away and clutching it against her chest.

He glowered at her, frowning and confused.

"It's the one my uncle called Voynichia. With the ladies in the water? I want to start with that one.”

Rey sighed and shook her head. “That’s not what I mean, Ben. I mean, what is that.” She gestured to his hands.

“Oh, you mean these! They’re my gloves. I wear them to protect the pages.”

Rey rolled her eyes and collapsed heavily next to him, the book cradled protectively in her arms.

“You know that's a myth, right? You don't have to wear gloves when you touch books. You shouldn't."

"That is what I told him, Mistress Rey, but he will not listen." The mechanical voice of C-3PO sounded from the doorway to the kitchenette as the golden droid shuffled out.

"Master Luke was misinformed," C-3PO declared authoritatively. "Hands in gloves lack the tactility and manual dexterity of bare hands. Handling a book with gloved hands could lead to accidentally torn pages when the gloves catch on fragile edges, or a dropped book if the gloves prove to be loose or slippery."

Rey nodded in agreement. Ben looked at his feet and avoided making eye contact with her.

"Additionally," C-3PO continued, "cotton gloves in particular have a tendency to lift fragments from pages, including pigments. Their fibers can catch in cracks that are invisible to the naked eye, further damaging friable pigments and inks. Furthermore, cotton gloves retain a lot of dirt, making them not so clean after all! In this same vein, gloves cause the hands to sweat, and this moisture can penetrate the gloves to wind up on the books."

Ben looked up at the droid. "I could wear leather gloves instead!" Rey shoved him with her elbow and he scowled.

C-3PO wasn't done. "There is simply no scientific evidence that handling paper or parchment with bare hands causes damage. The likelihood of clean, dry hands causing damage to any of these books is more than one million to one!"

Ben sat in silence, clearly unhappy. Rey gave him a few moments before reaching out and touching his shoulder.

"It's okay to be wrong Ben, you shouldn't feel bad. Just take the gloves off, go wash your hands - with soap, and dry them well - and come back, and then we can tackle the Voynichia."

"No, Rey, that's not going to work. I, uh," he twisted his face and blushed, "I don't want to touch it without gloves."

Rey stared down at the book, then back at him.

"So, parchment is made of animal skin."

Rey still didn't see the problem. She glanced over at C-3PO.

"I believe that Master Ben is trying to say that he is bothered by the material on which the book has been written. But I will admit that I do not understand why."

"Because," Ben grumbled irritably, "because whenever I see a book made of parchment it makes me think about the animals who died so it could be made. I just," he shrugged. "I just feel sorry for them."

"But… but you've killed people! You killed your own father, for kriff's sake! And you're feeling sorry for the dead banthas in the book?"

Ben's face was scarlet. "Rey! I didn't make my dad into a book! I wouldn't want to touch that either." He started to stand. "Never mind. I'll go somewhere else so you and Threepio can do it without me."

Rey grabbed his elbow and pulled him back down.

"No, please don't go, I'm sorry. You should stay. But you need to take off your gloves."

"If I may, Mistress Rey," C-3PO said, taking a shuffling step forward, "why don't you hold the book on your lap, so Master Ben can see it? You can read it together, and I will be here should you require assistance."

Ben and Rey agreed this was an excellent compromise. Ben took off the gloves and they sat on the sofa, side-by-side, and did their best to make sense of the famed Voynichia.

Still not clear? Here's a handy flowchart, courtesy of Derangement and Description.

I'm @leoba on Twitter too, come say hi if you like. I tweet about medieval manuscripts, politics, and Star Wars. I also co-host Sacred Texts: Codices Far, Far Away with Dr Brandon Hawk.

If you like the story please hit the Kudos button!