Nyx was not prepared to see a blond baby sitting on the floor in a dirty green onesie. Nor was he prepared for the shriek of delight. That kid had a set of lungs on him. “Ow, what? Cor, why is there a baby in our kitchen?”

“They had him hooked up to all these machines.”

“And he’s here because?”

Cor finally looked him in the eye. “You had mentioned wanting to settle down with a kid or two?” He tried.

“Cor you can’t just steal a kid from enemy territory because your husband was thinking of wanting one!!”

I was at KupoCon this past weekend and discussing the finer parts of fanfic and realised I never posted this fluffy gem.

Nyx might have been a little more giddy than usual after finishing his shift on the Wall.

Today was the day his husband was finally arriving home after spending a six month tour in Niflheim to infiltrate their labs. He knew how their jobs worked, though it didn’t stop the six month wait from feeling so long. And the required radio silence didn’t help matters either.

Turning onto the street where their tiny house was, Nyx’s earpiece beeped with an incoming call. “Ulric here.”

Nyx’s face lit up at the sound of Cor’s voice. “Hey. Long time no talk, handsome.”

Nyx could practically hear Cor roll his eyes. “When are you coming home?”

“Good, see you then.” The line went dead and Nyx ran home, uncaring of how eager he was to see Cor. He was a little miffed, though, that no one informed him that Cor had already made to Insomnia. Bursting through the front door, Nyx grinned when he saw the Immortal, fresh out of the shower in sweats and a t-shirt. Shutting the door, he dropped his bag and pulled the man into a tight hug, burying his face into the crook of his neck.

Nyx froze at the noise and pulled away. “What was that?”

Nyx walked around him and entered the kitchen. He was not prepared to see a blond baby sitting on the floor in a dirty green onesie. Nor was he prepared for the shriek of delight. That kid had a set of lungs on him.

Cor followed after him and picked the baby up. “It’s a long story,” he said, gesturing to to sit at the table, while he fixed them both a cup of coffee, balancing the baby on his hip with ease.

Sitting with Nyx, Cor began explaining (albeit vaguely for security reasons) the last six months. “They had him hooked up to all these machines. And he wasn’t the only--” Cor cut himself off.

“Cor,” Nyx said carefully, “How many kids did you steal--”

Cor stayed quiet, looking down at the baby who was playing with his fingers. “13. We, we could only get 13 out before risking the MTs blocking our escape.”

“Cor, where are the other children?”

“King Regis is having them sorted out to the adoption centres here in Insomnia and Lestallum.”

“And he’s here because?”

Cor finally looked him in the eye. “You had mentioned wanting to settle down with a kid or two?” He tried.

“Cor you can’t just steal a kid from enemy territory because your husband was thinking of wanting one!! ”

Clarus stared at the sight before him. Cor was bouncing the kid (“Prompto,” Cor said.) on his knee and pushed a piece of paper towards him. A form requesting paternity leave.

“With all due respect, Sir, did I stutter?” Cor asked calmly.

Clarus settled back in his chair, crossing his arms. “Have you thought this through? Taking care of a kid is a lot of responsibility, Cor, you’re text-book military.”

Cor shrugged and wrinkled his nose, looking down at the kid, who grunted. He stood up. “I’ve thought about it plenty in the two months it took to come home, Clarus. But if it makes you feel better, I’ll hand my resignation in tomorrow morning. Now, if you’ll excuse me, someone needs a diaper change.”

Clarus scowled. “Damnit Cor, that’s not what I meant!” He called after his retreating form.

She grinned, holding the item in question out. “It’s a chocobo onesie! Prompto would look so cute in it!”

The kid in question dropped the fake keys he was gumming on and made grabby hands for the outfit.

“Guess that answers that.” She handed it to him, her ovaries figuratively exploding when Prompto cooed and buried his face into the soft fabric. She leaned against the door frame that lead into Cor’s kitchen and watched him put Prompto in his high chair. “So there’s rumours circulating around the office that you handed in your resignation this morning.”

“Just making a point to Clarus, I doubt he’ll accept it,” Cor replied, pulling out some fruit to puree for lunch.

Monica moved over to sit at the table and watched him make lunch then sit down to feed Prompto. “Well, I’ll join your resignation if he doesn’t accept it.”

Cor looked at her, startled, a spoonful of banana and apple held just out of Prompto’s reach. “What?” He quickly looked back at Prompto when he started fussing.

She gestured to him. “Do you know how many parents I know that take the time to make baby food over buying that crap food from the store? Also, you spent two months hauling not just him but 12 other infants across Niff territory into Lucis. You change his poopy diapers like you aren’t handling a potential biohazardous bomb about to go off in your face. What I’m saying is, you’re clearly in this for the long haul and I would be pissed to see this kid go to a lesser deserving couple.”

Nyx rolled his shoulders, trying to get the tension out as he entered the house after a long day running warp training with the new recruits. He had tentative hopes this batch was going to last, since only two out of six lost their lunch. Nyx paused taking his boots off when he noticed how quiet the place was. Seeing that Cor’s boots were neatly placed on the shoe rack, he set his own aside and wandered into the kitchen, a smile coming to his face when he saw Cor sitting at the set table, passed out with Prompto snoring and drooling in that ridiculously cute onesie Monica bought. Taking his glaive coat off, he draped it over Cor’s shoulders. 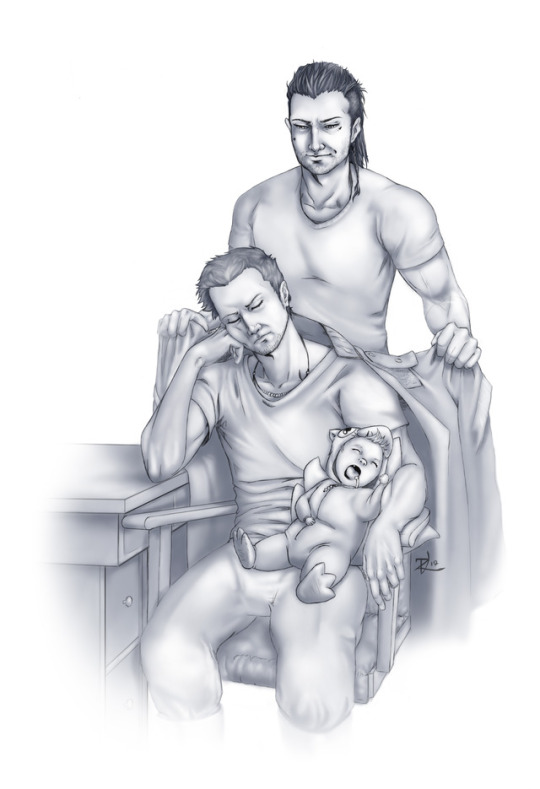 He grabbed the dinner plate Cor had made up for him, pausing on his way to take it to the other room to eat it, when he saw a file folder with the words APPROVED stamped on the front.

Setting his food aside, he grabbed the folder and flipped through it, his face lighting up when he saw the adoption had went through and a form for paternity leave had also been signed and approved. Unable to help himself, he let out a whoop, scaring the hell out of his husband and now-son.

Nyx grabbed them both into a hug, Prompto screeching his protests.

“Congratulations, this is amazing, Cor!”

Cor sipped his cold coffee, pouring over paperwork Monica had brought over. Paternity leave meant not having to come into work for the next year while he got Prompto settled, but Cor refused to come in to a year’s worth of paperwork to tackle. Anything that needed immediate attention was sent to either Drautos or Monica.

He perked up when he heard the front door open and Nyx call softly from the front room.

“You’re home early,” Cor commented when the Galahdian came into the office.

Nyx greeted him with a kiss. “Yeah, rare opportunity, I wasn’t going to argue.”

Cor gave him a tiny smile and set the papers he was looking at aside to focus on his husband. “Are you up for curry tonight?”

Nyx wrinkled his nose and pulled Cor up to sit with him on the couch crammed into the corner. “I guess. I still can’t believe how much Prompto loves that stuff. It’ll put hair on his chest before he’s 12.”

Cor snorted. “He’s blond, no one will notice.”

Nyx opened his mouth to reply, but paused. His eyes slid to the clock on the wall, then glanced in the direction of Prompto’s room. “Speaking of the little heartbreaker, shouldn’t he be up by now?”

Cor frowned and winced, annoyed he let the time slip by. “An hour ago, yeah, why’s he being so quiet?”

The two men got up and went to their son’s room, quietly cracking the door open. The smell and the sight before them filled them with a mix of amusement and dread.

There, sitting in the middle of a very poopy creation was one proud looking Prompto. The entire crib was a mess and part of the wall.

“Awesome, I’ll give it to Pelna to work on Prom’s graduation gift. In the meantime, do you think that cleaning service Monica paid for will come in right now?”

The Moogle Chocobo festival had come to town and Nyx insisted they check it out. “C’mon, you know Prompto would never forgive us if he didn’t get to meet a real chocobo.”

“He’s two, Nyx, he’s not going to remember this,” Cor said, following behind him as they wandered through the crowds.

Nyx waved a hand. “Semantics. Oh there’s the line up for the hayrides!” Cor dutifully got in line with him. “I’m going to go get us some cotton candy, be right back!”

Cor made faces at Prompto to keep him occupied. When the line shifted forward, he took a step and stumbled. Looking down, he scowled when he saw his bootlace was untied. “Stay put,” he said, setting Prompto down. Tying his boot up, he looked to where he had set Prompto down and his heart froze when the toddler was gone. Standing, he quickly scanned the area, seeing a flash of yellow disappear in front of the line up they’d been in. Cor hurried over and tensed when he saw Prompto standing under two chocobos who were harnessed to the wagon they were supposed to get on. Not wanting to startle the birds, Cor approached carefully. 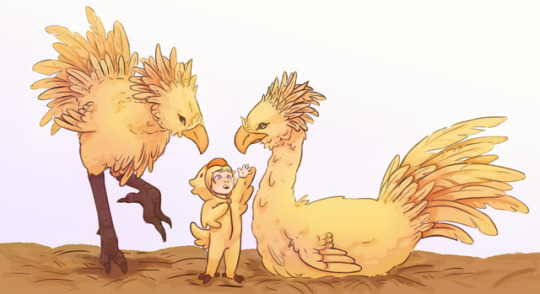 One of them took notice of something stepping on its foot and looked down. “Kweh?”

Prompto giggled when the chocobo knocked his hood of his onesie off and started grooming his hair. “Choco Choco!”

Cor looked at what he presumed to be the chocobos’ handler. “Yes, could I get my son back, please?”

“Oh! Certainly! Kids are just so attracted to these big mommas,” the man chuckled, reaching in to grab Prompto, who protested being taken away from his favourite birds.

“Hey, enough of that, I told you to stay put,” Cor frowned at Prompto, whose bottom lip wobbled.

“He escaped and hid under the chocobos,” Cor said, voice a little strained.

Prompto pouted and hid his face in Cor’s shirt.

“Can’t wait until he hits his teens,” Nyx said a while later as their wagon slowly made its way around the block.

“Why? Teenhood was a terrible time,” Cor replied, keeping both eyes on Prompto, who insisted on standing as close as he could to the chocobos.

“Nah, I think he’s going to be great, with parents like us.”

Monica totally has a stash of chocobo onesies of all sizes up to adult size so Prompto will never be without. She's a good enabling aunt like that.

Thanks for reading come yell at me on twitter!