I Know You Don't Sleep At Night

Bucky Barnes is a high class call boy working for Red Room Escorts. One night, while out with a new client, he witnesses a murder. The detective who interviews him is big, blond, and beautiful, and makes Bucky want things he shouldn't.
Little does he know, they've met before.
Steve Rogers is a detective in Brooklyn, called to investigate a murder at a nightclub. The witness he's told to interview is a hooker. When Steve enters the room, he can hardly believe his eyes. Bucky is lithe and beautiful, even at four in the morning after witnessing a homicide.
He knows the witness and the rules say, he must recuse himself from the case.
How many rules is Steve willing to break to keep Bucky safe?
Every. Single. One.

Please read
This is my first foray into Daddy kink and, like most of my other stories, it is fairly "non-traditional" (if I can say that?). So, even if you're not into the kink, I hope you will give it a try! <3

I'm so, so, so excited for this story! First, I want to say that this is my first foray into Daddy kink and like most of my other stories, it is fairly "non-traditional" if I can say that. So I hope you will give it a try!
Second, thank you so much to vita-divata for the beautiful commission in this chapter!
There's much more to come!
Title inspired by "Melodious" by Seether.

Bucky’s ass ached and not from anything fun. The metal chair in the police interview room was miserable and he sighed again, shifting to ease the pressure off his tailbone. Exhaustion had long since set in; when he’d last checked the time, it’d been 3:37 AM. He was cold, too, but his jacket had been taken into evidence, or so the uniformed officer told him.

“Christ,” he muttered, wincing in pain. He’d been there for almost an hour, treated like some criminal.

Well, he was a criminal but that wasn’t the reason he was at the station. Not this time.

The door opened and Bucky looked up. In stepped a walking brick shithouse with tousled blond hair and piercing blue eyes. In one hand, he carried a file folder and, in the other, he held a steaming mug. He was gorgeous and Bucky could easily imagine how those big hands would feel on him.

The cop hesitated for a moment, staring at Bucky as if he was waiting for… something. “I’m Detective Rogers, Mr. Barnes,” he finally stated, setting the mug on the table and pushing it toward Bucky.

Bucky didn’t touch it; he hadn’t listened to a thing the shithouse had said. Instead, he argued, “I didn’t see anything, like I told the cops at the club. I wasn’t near my jacket when… when it happened.”

Rogers sat on the chair across from him. “Yes, you did say that but it’s procedure to get a written statement. You were at the bar when the shooting took place, correct?”

Sighing, Bucky nodded. “Yeah, I was getting a drink for me and my friend.”

Rogers pulled a pen and tiny notepad out of the breast pocket of his light blue button-up. “What is your friend’s name?”

His tone was mild, even matter-of-fact, but Bucky’d played this game a few times. “I don’t know,” he answered. “We’d just met a few minutes before. I offered to buy him a drink.”

Raising one eyebrow, Rogers asked, “You didn’t introduce yourselves first?”

Bucky could hear the moral judgment in his tone and smirked. Gotcha, he thought. “I wasn’t planning to call him for a repeat.”

A muscle in Rogers’ jaw twitched but he nodded his head. “Why had you gone there tonight?” 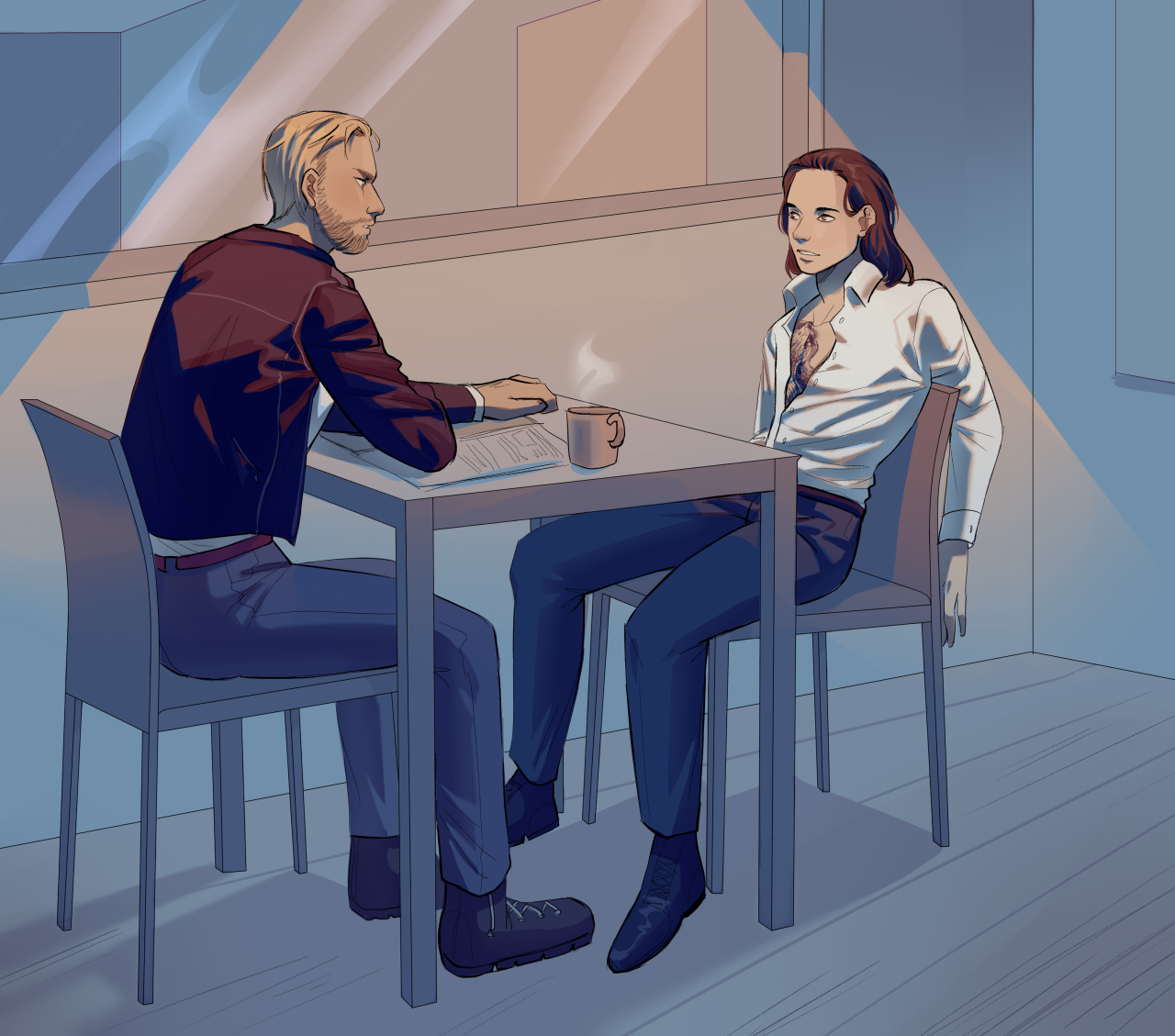 Rogers’ cheeks reddened slightly and Bucky smiled, brighter and teetering on genuine. He’d learned that if he showed cops a slight crack in his facade, they trusted him more. If the open surprise was any indicator, it was working for Rogers too.

“And did you, uh, think this guy was him?” Rogers asked in a slightly breathless way.

Shaking his head, Bucky leaned forward over the table. The thin white shirt he wore slipped down a bit and he caught the way Rogers eyes followed its movement. It wasn’t his most revealing shirt but it didn’t leave much to the imagination; his tattoos and pierced nipple were on full display through its translucent fabric and Rogers’ eyes seemed to miss nothing.

Bucky could recognize desire when he saw it. He looked up at Rogers through his lashes and bit his lip. Easy as pie.

Taking a sharp inhale, Rogers leaned back, blushing. “Please stop flirting with me, Buck,” he said and Bucky’s eye twitched. “A man is dead.”

There was a long moment of silence before Rogers seemed to realize what he’d said. “Oh, shit,” he breathed. “Shit, shit, shit.” He glanced over his shoulder toward the door; maybe he was checking the window to determine if they were being observed; maybe he was thinking of running. “It’s, uh, it’s Steve,” he finally answered, looking away.

Bucky’s eyes widened and he felt all the blood drain from his face. “Steve? Steve Rogers?”

“Yeah,” he replied, smiling just a little. His eyes were soft and just bordering on affectionate. “It’s me, Buck.”

Bucky’s heart ached at the nickname. Memories of hot, sticky summers, running through the streets and raising hell; of long winter nights, worrying over Steve’s health; of the sweet, innocent feelings that Bucky’d fought down – it all came flooding back. But this Steve was so different than the one he remembered. He was tall and broad, muscular and rugged, and Bucky blinked over and over, trying to understand what was happening.

He gulped and scrubbed his hands over his face hard. The idea that brave, wonderful Steve was seeing him this way – seeing what he’d turned into – it made him want to throw up. There could be no illusions as to what Bucky was actually doing at that club and for the first time in years, Bucky felt ashamed, dirty even.

Luckily, he had a defense mechanism, no matter how it turned his stomach to use it. “Oh, Stevie,” he flirted easily, “when’d you go and get so big and beautiful?”

Bucky couldn’t let Steve look at him that way anymore, as if no time had passed, as if they were those same kids. Too much had happened for that to be true. There was too much time and space between them now, too much pain that couldn’t be ignored.

But Bucky knew the score. He knew the people involved and knew that this murder would get buried. When it did, Steve would disappear from Bucky’s life, as if he’d never been there.

“I, uh,” Steve began, obviously thrown off by Bucky’s shift from sullen to seductive. “I guess I finally hit puberty.”

The joke missed the mark, though Bucky did laugh – but it was the same laugh he gave his clients when they tried to ease the tension. It wasn’t real.

“Well,” Bucky replied, flashing his sexiest smile, “it suits you,”

Something flickered across Steve’s face – anger, maybe. But it was gone as quickly as it had appeared. “Um, thanks,” he replied, slowly, as if feeling the words out. “So, can we continue?”

Bucky raised an eyebrow but gestured for Steve to go on, waving his hand. “I don’t know what else I can tell you. I met the guy, took my jacket off, offered to buy him a drink, and went to the bar. I was waiting for the bartender to notice me when I heard the gunshots. I dropped to the ground and covered my head.”

Covered my eyes more like, Bucky thought. They won’t kill you if you haven’t seen their faces.

“Had you ever seen the guy before?” He asked, writing notes.

Shaking his head, Bucky answered, “No.” He kept his responses short and to the point to avoid sharing anything real.

The truth was, Bucky didn’t really know the guy; he only had a first name, as well as a time and place to meet. Aldrich. Le Bain, 11:30. Natasha told him that he’d been requested specifically, which wasn’t entirely unusual – what had been unusual was that he’d paid Natasha enough that she canceled Bucky’s regular client for the night.

“Was anyone else familiar to you?”

Bucky shrugged. “Sure, I go to Le Bain sometimes, so I recognized the bartender and one of the bouncers.”

“Any of the dancers or people at the bar?”

“No,” Bucky answered easily. “But I wasn’t really paying attention.”

Steve looked up. “I thought you were looking for Mr. Right.”

Steve didn’t seem to know how to respond to that but, before he could try, his phone rang. He stood up, digging in his pocket. “Excuse me,” he said, distantly, and took the call outside in the hall.

Bucky stretched his back, lifting his arms over his head and yawning. He pushed the mug away, uninterested in drinking the shit that cops had the audacity to call ‘coffee.’ After another moment, the door opened and Bucky was surprised to see a woman there, instead of Steve.

“Mr. Barnes,” she said in an almost bored tone. “You can go for now. We’ll get your statement later.”