the prayer of going nowhere

For his whole life, Sam has been a boy—only he was assigned the female gender at birth, so everyone thinks of him as a girl. But now, on his thirty-sixth birthday, Sam may finally have the chance to let his outsides match his insides.

Written for SPN Reversebang and inspired by this artwork by the amazingly talented happilysammy.

His shoulder blots out the stars but the minutes don’t stop. He covers my body
with his body but the minutes
don’t stop. The smell of him mixed with creosote, exhaust–
There, on the ground, slipping through the minutes,
trying to notch them. Like taking the same picture over and over, the spaces
in between sealed up–
Knocked hard enough to make the record skip
and change its music, setting the melody on its
forward course again, circling and circling the center hole in the flat black disk.
And words, little words,
words too small for any hope or promise, not really soothing
but soothing nonetheless. 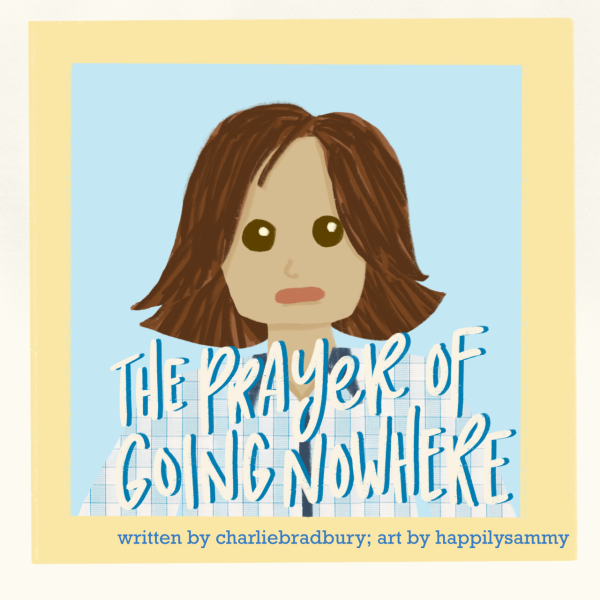 Sam loves the way the laugh lines gather at the corners of Dean’s eyes, tiny splintering slivers of happiness that remain branded behind Sam’s eyes long after Dean has stopped smiling and looked away.

He carefully unwraps the little package. Dean’s birthday present for him is made of dark silver, an oxidized wristband engraved with protective sigils.

The wristband is custom-made, the symbols on it a tangible marker of the need to ensure Sam is always safe, a need that’s hardwired into Dean.

The wristband is also unisex, a fact that Sam clings to as though his life hinges on it.

‘It’s beautiful,’ Sam says, soft, like his heart isn’t denting under the weight of the secret he’s kept from Dean, from the world, for thirty-six years.

For decades, Sam has yearned to go nowhere. To live a life that isn’t full of frenetic activity, moving from one monster to another, one mission to another, one small town to another. Everything in his life has always been changing, nonstop, a rollercoaster that he just about barely manages to cling on to, no safety belts in place to ensure that he doesn’t hurtle off into nothingness.

His outsides have never matched his insides.

Sam figured out early on that he was a boy, but no one else ever did.

Not even Dean, and it wasn’t because Dean wasn’t observant. Dean was plenty observant, sharp enough to notice a new bruise on Sam’s knee or a new hole in his jeans (which meant either darning or throwing the pair out and ensuring Sam had new ones). He just didn’t notice about Sam’s gender because while Dad and Dean were training Sam to be a hunter, Sam was training himself to become a secret-keeper.

Getting away from Dean’s idea of birthday celebrations isn’t easy, but Sam manages it by faking a stomachache.

‘Aww,’ Dean says, kissing the top of his head.

Casual affection has always been one of Dean’s things. It’s a thing he reserves especially for Sam.

(How lucky Sam is that his parents named him Samantha, so easily shortened to a name suitable for a boy, Sam. Or Sammy, when Dean’s feeling particularly affectionate.)

‘You sure you’ll be fine on your own?’ Dean asks, fingertips brushing lightly over Sam’s jaw. Sam fights the urge to close his eyes so Dean doesn’t see the effect that the slightest of his touches has on Sam.

(If Dean knew Sam’s othersecret—how exhausting it is to have so many—he’d probably punch Sam in the jaw and throw him out of the bunker. But Sam has had thirty-six years of experience hiding things from Dean, especially the things he feels when Dean touches him casually, obliviously. Large things, things that fill up his mind like granite stones, like Fortunato’s wall that cuts him off from the outside world, keeps him fenced in until he runs out of air and suffocates to death.)

‘You know it,’ Dean says with a wink, hefting his bag. ‘Be back before you know it, princess.’

Dean will definitely be back in no more than two or three hours. They have a tacit rule not to stay apart for too long. Sam tells himself it’s something that all hunters do, because it’s safer to hunt in pairs.

Which means that Sam doesn’t have much time.

As soon as he hears the door slam behind his brother, he jumps out of his chair and runs down the hallway to the basement. Beyond the dungeon, beyond the bunker’s many storerooms filled with decades of paraphernalia, small passages splinter away into the distance. Sam and Dean have often wondered if the bunker is endless, going on and on underground like a labyrinth of crimefighting technology, stretching for forever under the surface of the unknowing earth. They’re always meaning to explore further, always prevented by the rise of some new Big Bad or some new-old enemy surfacing from the past and demanding all of their attention like petulant children.

Three days ago, Sam had discovered this particular room, its door hidden away like a secret in a crevice of one of the darker, mustier passages.

He’d found it entirely by accident. Kire, the black cat he feeds whenever she senses his presence at home and wanders in for a meal, had decided on a whim to skitter down the hallway and out of sight after she’d finished her tuna. She’d probably been chasing a mouse, either real or imagined. Or ghostly. Sam won’t put that past the bunker.

Shaking his head to clear it, he pushes open the hidden door, wincing at how loudly it creaks in the utter silence.

‘Hello?’ he says, turning on the light. It hadn’t been working when he first found the room, but he’d fixed it with a new bulb. ‘Evanora?’

‘Have you decided?’ The voice—the disembodied voice—that Sam has become accustomed to hearing is as dry as ever, the speaker always sounding as though she’s on the verge of making a caustic remark. So far, though, she’s been pretty decent to Sam.

She’s offered Sam the world, and then some.

‘No.’ Sam sits down on the wooden chair with the faded red plush cushion that seems to have become ‘his’ spot since they started this conversation.

‘Why not?’ The speaker sounds curious; only mildly so, as though inquiring about the weather outside.

When Sam doesn’t respond, the speaker chuckles, a new lilt to her voice. ‘Ooh, it couldn’t be because I’m a witch, could it? Samantha can’t handle the thought of collaborating with one of the bad people?’

‘Don’t call me that,’ Sam says shortly. Of all the people he’s ever known, this person—this ghost, this witch, whoever—is the only one who knows his secret, and Sam hasn’t shared it voluntarily. Apparently, Evanora has a gift for reading people.

‘I’m not. In fact, if you think about it, I’m probably the only person you’ll ever know who’s willing—and able—to give you exactly what you want. The body you’ve always dreamed of having.’

For a long moment, Sam lets himself imagine it: the stubble that would grow on his face by the end of every day. The feel of a flat chest, a liberating surface. Perhaps a slightly broader jaw, longer legs. Holding himself in his hand, full and thick, when he pleasures himself. When Dean—

All Sam needs to do is find the key to the door at the other end of the long, dusty room. It’s all Evanora has asked for in return for gifting Sam with the body that is truly his own. Get the key and let her out.

A key he’s already found: it wasn’t difficult, with Evanora’s description. Tucked away unobtrusively in a small drawer in one of the library’s many desks, it had shone with a dull gleam, as though asking to be found, when Sam had slid the drawer open. It’s ornate, bronze, large enough that Sam can’t close his fist over it, with tiny, intricate carvings etched into its ancient surface.

Evanora doesn’t know he has it. Not yet.

He puts his elbows on his knees, bows his head, pushes his hands through his almost-shoulder-length hair. It’s too short to be considered traditionally feminine, too long to belong to a someone who’s masculine in the conventional sense. Sam’s always existed in in-between spaces, liminal and contrary, and even his hair reflects it.

‘Let me give you a glimpse of what it would be like,’ Evanora murmurs, and something drifts against Sam’s nostrils.

An invisible smell, he thinks, and is immediately struck by the absurdity of the idea.

‘Let me show you. It won’t be real. Just an illusion. But you’ll know.’

In all of his life, in all of the times that exhaustion took him over, convinced him that there was never any chance for someone like him, no one has ever offered him an actual solution. A way out of his endless misery.